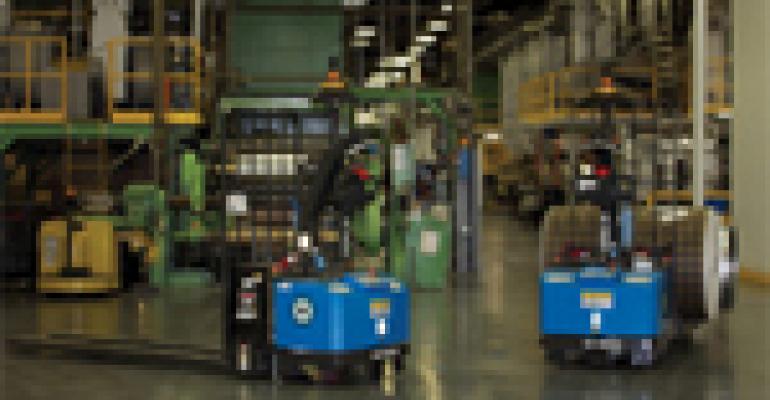 The word lean doesn't seem to fit a company that calls itself a full-service flexible packaging manufacturer. After all, American Packaging Corp. relies on three different sites to do extrusion lamination and coating, flexographic printing and rotogravure printing.

When APC adds one of these machines to its operation, the plant's footprint must expand. Expansion means printed material must be moved farther to reach the storage and dock areas. In the past that has been the work of lift truck operators. But with the latest expansion, that use of valuable labor was finally seen as a waste, and just the opposite of the lean philosophy that APC has adopted.

"Waste is when I have an operator sitting on a forklift and driving back and forth when they don't need to," says Jon Smick, finishing manager for this APC facility. "It's wasted time and movement."

APC's newest press, Roto number 7, came with a 100,000 sq ft expansion of the building. This press is at one end of the building and the slitters at the other end. Forklift drivers would pick up a roll or a pallet of paper and deliver it to the other side of the facility.

"That's not skilled labor, and it's the labor costs that killed us," Smick says.

That's why APC looked at automation alternatives like automated guided vehicles and robots. Robots won out. By automating product movement APC was able to disperse the labor for more value-added activities. It purchased two automated pallet trucks (Seegrid GP8s) to transport materials to the company's eight- and ten-color rotogravure presses, 24 hours a day. When APC added the latest press it would have required a minimum of three or four forklifts and drivers on each shift.

APC decided against AGVs because it didn't want to deal with wire, tape, laser or other means of vehicle guidance for such long distances.

Lift truck operators still unload trucks and ship finished goods, but only three are needed for those tasks now instead of the five required to drive the entire length of the plant, resulting in a 20-25% labor savings.
The automated pallet trucks get routed throughout the plant based on the most efficient run. An operator keys-in the destination to send the vehicle to the other side of the plant. The vehicle will drop the material behind the press and return on its path to the next destination.

"We're on our fifth expansion in the last 10 years so everything involves smaller buildings and ramps and tight corridors," Smick says. "Every other year for the past six years we've added a new rotogravure press. In two years my plant will probably look totally different again, so by the time this lease expires I know my finishing department won't even be where it is now, it might not even be attached to this building, which would change the dynamics of the whole supply chain again. That's why we like these automated pallet trucks. They offer the flexibility to change."