'It's a wrap' for Pringles 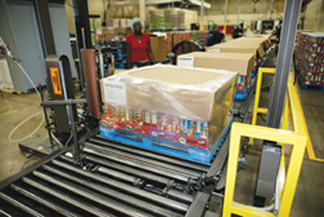 It's a test of the machinery on most food-packaging lines when product demand increases. If any machine slows down or falters, the problem can directly affect the entire line and consequently the volume of shipments that goes out the door.

At Procter & Gamble's Pringles® potato chips plant in Jackson, TN, increased production volume began to outpace the capabilities of the end-of-line equipment that stretch-wrapped pallets of the popular Pringles canisters. To meet the increased demand, the existing wrapping equipment would basically have to be doubled in quantity, which would be costly and would create an impossibly tight squeeze on the plant floor.

At an adjacent facility, contract packager Aldelano Packaging Corp. (www.aldelano.com), which handles the Pringles packaging operation for Cincinnati-based P&G, decided instead to upgrade to two new FA-44 automatic rotary turntable stretch wrappers from Orion Packaging Systems, a div. of Pro Mach Inc., (www.promachinc.com), that could easily handle the throughput of four of the former systems. Overall, the new wrappers work as well or better than projected, according to Aldelano's Jackson plant production manager Frenchie Smith, and have “chipped in” a 52-percent increase in throughput, with little maintenance or downtime for stretch-film changes.

Aldelano calls its rather unique approach to contract packaging, “to-your-door” service, saying that it leads the industry with such service. “We set up our operations at or near the customers we serve,” explains Nicole Smith, national operations manager at Aldelano. “We're never more than fifteen miles away and often within the customer's existing facility. That enables us to function as a proactive partner with these customers, not just as a vendor.” 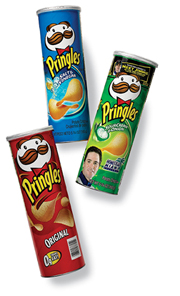 Aldelano has been working within the Jackson P&G operation since 1991, when it installed repackaging, palletizing and stretch-wrapping lines in the building on the P&G plant grounds, a short distance from P&G's potato chip-production lines. Aldelano's role is to pick up cases of Pringles containers from the P&G plant, truck them back to its own facility and repackage them in a variety of ways on its end-of-line operation. The canisters arrive on full pallets (five layers high), which are broken down into mixed loads by Aldelano personnel.

Some of the cases are even opened and used to repack mixed-flavor cases containing different varieties of stockkeeping units (for example, six packages of each flavor). In other instances, Aldelano's personnel cut the tops off of the cases and convert them into 22-count and 14-count trays that can quickly go into retail floor displays. Or, the personnel can create mixed pallet loads of full cases of single flavors. Currently, the repacking of the cases takes place on the production lines, and the cases are conveyed to stretch-wrapping stations. On two of the lines, they are stacked into full 40348-in. pallet loads, special half-loads (four cases high) or quarter-loads (two cases high). All of the loads are topped with a corrugated top cap to protect them from dust and from getting crushed during shipping. They're quickly and securely stretch-wrapped and moved off to the shipping area.

“This is a very high-volume operation,” explains Nicole Smith. “Previously, we had three or four production lines running into our older wrappers.” She says that the former wrapping equipment had reached its production maximum, and since P&G's production was increasing, Aledlano needed higher throughput. “The former wrapping equipment just couldn't keep up with the increasing volume,” she says. “That part of the operation was becoming a bottleneck.”

Space was also extremely tight at the end of these lines, she says, and the lack of space made it impossible to even consider replacing the two existing wrappers with four new ones. Aldelano looked at several stretch wrappers from different providers, but Orion's equipment and the service provided by its distributor, Turnkey Packaging (www.turnkeypackaging.com), won the contract. 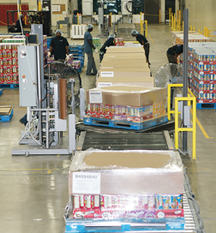 Pallet wrapping at the Aldelano plant is situated within the P&G production grounds in Jackson, TN. The wrapping and palletizing process, above, shows one of two automated wrappers that eliminate manual movement of pallets on and off of the wrapping turntable.


Featuring a turntable with a maximum speed of 16 revolutions/min and a maximum load capability of 5,000 lb, the FA-44's entire cycle is fully automatic. The turntable rides on a high-performance, ring-bearing support and is turned by a heavy-duty chain and sprocket drive. At the end of each cycle, an asymmetrical film clamp holds the film web in place while a pneumatic thermo bar cuts the film. A pneumatically activated brush then secures the film tail to the load.

Turnkey Packaging sent samples of Aldelano's pallets to an Orion facility in Memphis. Aldelano production personnel soon followed for a visit to see test runs of the FA-44 wrapper in actual operation with the pallets.

The system demonstrated that it could handle Aldelano's production challenges. The wrapping equipment was quoted to Aldelano in December 2006, and two identical wrappers were delivered to the Jackson plant in January 2007. They were installed between February and early April.

After startup adjustments were completed with the help of Turnkey Packaging, full production began in April. In the new production arrangement, the three to four existing production lines were reduced to two, feeding into the two Orion wrappers, which are side by side. Both of the pallet wrappers have long infeed and exit conveyor sections, Orion says, so that loads are easy to build on the input side of the machinery and can be accumulated on the exit side.

Operation since April has been smooth, speedy and trouble-free, says P&G and both Nicole and Frenchie Smith of Aldelano.

The plant currently runs at a cycle time of 65 sec/per wrap, compared to cycles of 120 sec with the former wrappers, Frenchie Smith points out.

The FA-44 system includes Orion's Insta-Thread film delivery system with an ergonomic design that faces to the side for easy film roll loading and threading, making the process faster and simpler than ever.

Specially designed rollers on the system elongate the stretch film at a standard rate of 260 percent, which has cut film costs, according to Aldelano. A photoeye senses even reflective loads, and causes the wrapper to pause the wrap cycle if the stretch film breaks or runs out. 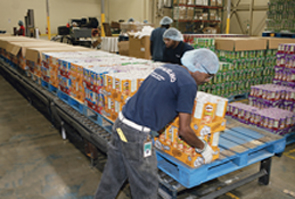 Aldelano has palletized Pringles cans at P&G’s Jackon operation since 1991, right. An operator, below, controls wrapping features from a touchscreen and panel.


The Insta-Thread system can also stabilize the loads, a challenge with which the previous equipment struggled. The former wrappers experienced problems keeping the lightweight half- and quarter-pallet loads in place during operation, Aldelano says. Pressure of the film pulling on the loads sometimes made the light loads slide off of the conveyor. The Insta-Thread film system includes a corner compensation device that automatically adjusts the machine to handle both light and normal weight loads interchangeably. The compensation device creates less lateral pull on the load.

A sensor instantly detects pallet size and weight and adjusts the wrapper accordingly. For example, heavyweight loads, such as a pallet of filled bottles, are wrapped with heavy tension, but the lightweight cases and trays of Pringles canisters are wrapped using lighter tension, courtesy of the corner-compensation device, which eases tension at the corners of the pallet loads of chips.

Orion says that the corners of the load can exert up to four times the “pull” against the film than the sides of the load. The device evens the tension of the film around the entire load, while the film prestretch ratio remains constant. This corner-compensation prevents Aldelano's light half-pallet and quarter-pallet loads from shifting or pulling off of the system's wrapping turntable.

The new equipment has proved its worth, Aldelano says, and it wraps more loads in less time. The higher throughput is something Aldelano and P&G both appreciate. The wrappers are more efficient, which helps to meet demand for the chips, notes Frenchie Smith.