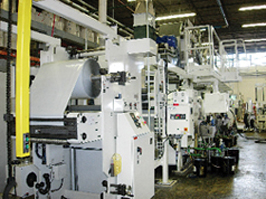 Prairie State Group (www.psglabels.com) began as a company producing pressure-sensitive labels, then grew into two companies as it entered the flexible-packaging market. Today, it continues to explore various sectors in the converting industry. In1989, Rick Heinzen, PSG president, started Prairie State Graphics, a p-s label business. After successfully growing that venture, he noticed the growth in the flexible-packaging market and teamed up with Graham Redding, PSC executive vp, to pursue that sector.

In 1999, they created Prairie State Impressions to handle the flex-pack market, purchasing a 20-in., eight-color OMET (www.matik.com) press for short- to medium-run flexible-packaging and p-s products. It complemented the four Mark Andy (www.markandy.com) presses they already had for p-s labeling. As the label and packaging business prospered, Heinzen and Redding found themselves in need of a new press, more room and someone to handle the plant operations while they continued to grow their client base.

Along came Dan Doherty, then president of Fort Dearborn Flexible Packaging, who had previously worked with Heinzen. Doherty took on the role of PSG vp of operations, so that Heinzen and Redding could focus on expanding the business. 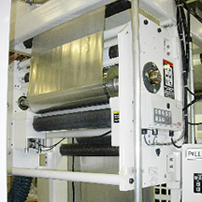 The mid-web press, above, can tackle multiple substrates, including unsupported film, paper and carton board.

To ease the crowding issue, PSG moved to Franklin Park, IL, and installed the first 26-in., 9-color Evolution press from Paper Converting Machine Co. (www.pcmc.com) to handle the continuously growing flex-pack business. PSG was impressed by the Evolution's combined narrow-web and wide-web technologies, which opened door to the snackfood, meat, cheese and confectionery markets with its cold-seal capabilities. When it came time to order another press, PSG looked again to PCMC. “We discussed what worked and what didn't with the Evolution and helped shape the Revolution,” Doherty explains. PSG ended up with a servo-driven, 10-color (nine-color when using the UV-coating deck or laminator), 26-in. press with an in-line lamination module and an eXtreme™ drying system that uses compressed-air technology. It also features a corona-treater system from Pillar Technologies (www.pillartech.com), a turret rewinder from KTI (www.keenetech.com) and a quick-change sleeve design for short-run projects. The Revolution runs at up to 1,000 fpm and can handle unsupported film, paper and carton substrates. Installed in early February, it began running half a dozen jobs while PCMC trained PSG's operators. “It's already outperforming the other two [Evolution and OMET] presses,” Heinzen says. “It can do the work of the other two presses combined. It can potentially double our business.”