Buffalo Rock, Birmingham, AL, a mid-size soft drink manufacturer and beverage distributor, and one of the oldest and the largest family-owned Pepsi franchises in the U.S., has once again refreshed its beverage packaging case-handling lines with retrofitted conveyors (see PD, Aug. '01, p. 44), this time to handle its latest innovation, a new 8-pack soft drink can carrier called the Fridge Mate. Rolling off the line at Buffalo Rock in September, 2002, the Fridge Mate pack is designed to make dispensing from the refrigerator easier. 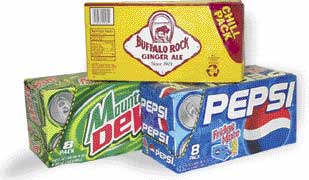 The brightly printed paperboard pack holds aluminum cans in a 2 x 4 configuration. To produce it, the company creatively reconfigured several package conveyors, a daunting task made easier with modular plastic belt technology from Intralox that is helping the lines run efficiently and effectively. The results have cut labor, replacement costs and maintenance–just what maintenance manager Mike Gamble was thirsting for.

"We are the first Pepsi bottler to run the Fridge Mate packaging," Gamble notes. "We've been running Fridge Mate once a week, in forty-eight-hour spans, and the response is looking very good. We'll probably increase production soon."

Along with Pepsi's main brands, Buffalo Rock packs the slim cases with 12-oz cans of Mountain Dew, Dr. Pepper, Mug Root Beer, Procter & Gamble products such as Sunny Delight and its Buffalo Rock brands–Grapico and Buffalo Rock Ginger Ale. Measuring approximately 101/2 x 43/4 x 51/4 in., the cases, what maker MeadWestvaco trademarked FridgeMaster™, are perforated and die-cut at the top with handle holes and on two side panels to easily release the cans, which, in the refrigerator, rest on their sides.

Dedicating two (soon to be three) of its seven soft drink lines to 12-oz aluminum cans, the plant operates 24/7 and can handle up to seven different soft drink products a day, so it must keep its bottling lines bubbling in top condition.

The plant started retrofitting sections of the conveyor in 2002 and has continued to do so ever since, on a regular basis. At the time it began running the Fridge Mate cases, it also added two new palletiziers from Production Automation Inc. Retrofitting straight, curved, and incline conveyors on Lines 1 and 6 with hundreds of feet of Intralox EZ Roller Retrofit™ components and modular plastic belts has facilitated conveying of the narrow Fridge Mate cases and has also reduced maintenance by at least 85 percent. The plant in Birmingham has often relied on modular plastic belting from Intralox in the past, so Gamble decided once again to contact Intralox about adding new components to smooth out what could have become a bumpy ride for the Fridge Mates on an extensive setup of roller conveyors.

Efficiency, cost savings increase
The EZ Roller Retrofit components easily snapped onto the existing rollers, eliminating the need to strip out rollers or remove conveyor frames. The components include inclines and other straight conveyors made of ultra-high-molecular-weight wearstrips that were preattached to clamps. The Series 1400 has a 1-in. pitch, a 6-in. minimum width and a closed-hinged-style design with fully flush edges. For curves, Intralox installed EZ Retrofit™ Series S2400 Turning Radius flush-grid belts. The upgrades also include S1400 glass-filled nylon split sprockets and S2400 6.4-in. acetal sprockets.

Without the new components, the slim pack couldn't be conveyed over the roller conveyors. The cases of 2 x 4 cans emerge from Mead 1250 case packers with their longer, four-can-side facing forward. Since the cases are only two cans wide, they're too slender to transfer over the 1.9-in.-dia conveyor rollers. "We would have had a problem with cases bouncing across the rollers, and they would have been knocked out of position," Gamble points out. "The retrofits saved eight-five to ninety percent of the cost to maintain conveyors the first year."

Spacing the cans evenly, the new belt conveyors reduce labor and replacement costs, saving an estimated $32,000 a year or more for the first line alone.

The continuous belt maintains uniform gaps between cases, so there are no dead zones on which the cases would bump into each other and move out of position. The improved case flow increased throughput, with a 4.5-percent boost in efficiency.