Protective clamshell is a home run 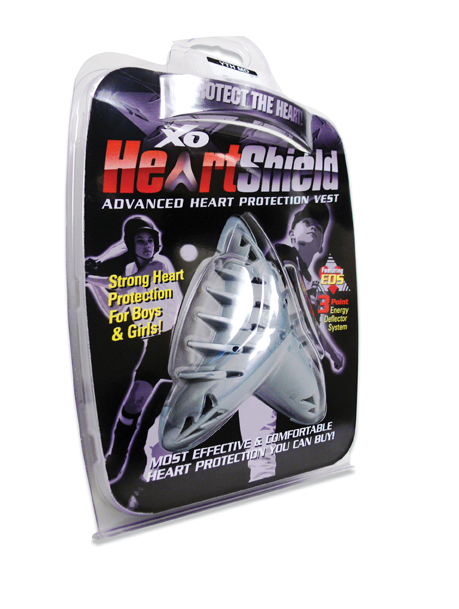 When XO Athletic Co., Hillside, NJ, (which has more than 20 years in the sports medicine category, supplying the U.S. athletic cup market since 1986) decided to introduce a protective device for young athletes, it called on Alloyd Brands (www.alloyd.com), formerly SCA Consumer Packaging, to help get the final package to market efficiently. Having recently repositioned itself from being a respected machinery and mold manufacturer to becoming a single-source producer of high-visibility packaging, Alloyd was able to help XO Athletic leverage impactful, functional and graphic package design to maximize the market for the XO Heartshield heart protector vest.

If a young athlete was to be struck by a ball, hockey puck or an errant bat or stick, the innovative new device would transfer the force of the blow safely away from the heart area to the muscles and bones of the chest. A triangular-shaped, molded plastic shield called the Energy Deflector System (EDS) transfers the force of a blow along its arms and away from the heart. The XO HeartShield helps protect young athletes from Commotio Cordis, a rare but potentially fatal condition, resulting from a hard projectile impacting the heart in the few milliseconds between beats.

The development of the XO HeartShield was inspired in part by the experience of Steven Domalewski, a 12-year-old New Jersey player who suffered the condition when struck in the chest by a line drive. Today, $1 of every XO HeartShield sale goes to help defray the cost of Steven's continuing medical care.

XO Athletic is known for its protective sports gear, led by its line of ProCup protective sports cups. The innovative ProCup design encases a hard protective cup in a soft rubber overmold that makes it comfortable to wear, and holds it firmly in position. According to XO Athletic's co-owner Mike Landi, the unique design of the ProCup enabled it to become a top seller in the protective cup market after the brand was launched in 2003.

Landi and his brother Jim wanted the same comfort advantage for the XO HeartShield that it had given ProCup. XO Athletic decided to injection-mold the EDS firmly into the fibers of a pullover compression vest, making the device comfortable to wear and also preventing the EDS from slipping out of position (the vests come in a wide range of sizes and can be worn by both boys and girls to teens, aged 5 to 18).

The Landi brothers also wanted XO HeartShield to break into the packaging marketplace with the same success achieved by the ProCup package. In preliminary market research, XO Athletic had heard many negative comments from potential wearers about the “uncool” appearance of an existing competitive heart-protection device. That product was held in place by straps and had a cross-shaped shield with sharp edges that interfered with comfortable playing action.

XO Athletic knew that it had that prejudice to overcome, not only in its product, but also in the packaging that would be the first face the product would present to its target audience. “Our primary goal at XO,” points out Mike Landi, “is to make products that are functionally better than the competition, that are so comfortable to wear, that players forget they have them on. But they also have to look cool, so that kids will wear them. If they don't, we're wasting our time. The first thing the kids are going to see in the store is the package.”

The resulting polyvinyl chloride (PVC) thermoformed clamshell meets these needs and more. Other challenges included the ability for the package to show off the XO HeartShield to its best advantage in crowded displays at stores like Sports Authority or Dick's Sporting Goods, where differentiation is critical, and allow customers to conveniently choose the right product size.

Heat-sealed blisters wouldn't be as practical for this product because sizing is involved. Parents often open sealed packaging in the store or at home to check a size. Stores then return opened packages to the marketer for repackaging, a cost Landi planned to eliminate.

Alloyd suggested an easy-open clamshell with a shape that would stay neatly on a peg rack and let customers easily open it and hold up the product for size. They could then put the product back in the package, which could neatly reclose. Says Landi, “The original idea was trying to do too much. Stores liked the concept, but the package was too large. Alloyd Brands helped us develop a more compact package with a display footprint acceptable to retail but that still shows off the vest.”

The final blister is sized so that six to eight packages hang neatly on a 6-in. gravity-fed peg. The clear PVC clamshell is closed with a series of perimeter interference snaps that keep the package secure during shipping, but enable consumers to open them to inspect the product.

The pack is thermoformed from custom molds. XO fills the packs and inserts the protective vests and cards that carry eye-catching graphics. Soon, XO Athletic says Heartshield and ProCup will feature cards made by Dot Packaging (www.dotpack.com), which recently became division of Alloyd Brands.