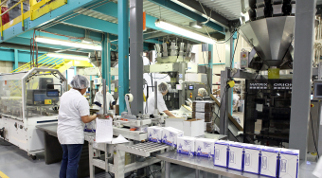 The company produces its own Kay's Naturals line of specially formulated nutritional snack products that include cereals, pretzels, cookies, protein chips and similar products. It is also a contract and private label producer for other companies. Its sweet snacks and cereal, which are formulated with little sugar, are sweetened with Stevia for the diabetic, weight loss and sports nutrition markets.

Masssoud Kazemzadeh, owner and COO, says, "Salty snacks account for slightly over half of total snack sales. Growth in this segment of the market is driven by convenience factors and flavor trends. Hence, key growth categories are those offering the most variations in flavor and health trends. 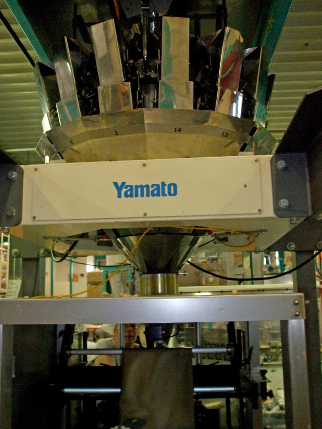 vory snack products that are organic or all natural, low-calorie, low-fat, low-carbohydrate, low-sodium or offer health-promoting benefits, such as soy or no trans fat, are in greater demand."

The company is tapping into this trend. Kazemzadeh says, "Our products mostly are very high protein (12g of protein per 34g serving), and we are the only company in North America that produces gluten-free high-protein pretzels."
Kay's Processing's packaging lines run a variety of products in package sizes from 1 to 16 oz using vf/f/s machines with overhead scales. The equipment runs approximately 60 cycles/min for a production rate of 3,600 lb/hr when running 16-oz packages.

Kay's Processing installed its fourth Matrix system this past January. (It has a fifth vf/f/s machine from another manufacturer.) The system incorporates a Yamato combination weighing system mounted above a Matrix Orion vf/f/s bag maker. Product to be packaged is transported in plastic bins that are set on a stand, and the product then discharges into a bucket elevator that lifts them to the Yamato unit. A sensor detects when product is needed and turns the elevator on and off.

The feed buckets, in turn, drop product into the weigh buckets. The amount of product delivered to each weigh bucket is about one-third to one-sixth of the weight of the finished package. For each weighment, the control system selects the best combination of three to five weigh buckets that comes closest to containing the total desired bag weight without being underweight, and these buckets discharge into the bagger.

Each discharge is displayed on the scale's HMI, which shows the fill weight, which buckets released product and other statistical data. The weighing system automatically calibrates itself for bulk product as it passes through the system, tracks the product and continuously compensates and updates itself for optimal performance.

The film for the bags, which is supplied by CastlePierce, is c 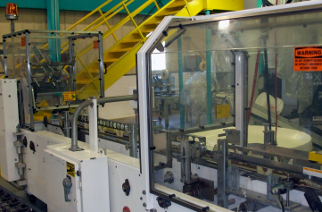 mposed of an outer layer of 80-ga OPP laminated to an inner layer of 120-ga metallized OPP. The film is reverse flexo printed in up to nine colors on the inside of the outer layer.

A roll of film is mounted on the back of the Orion intermittent-motion vf/f/s machine and the film is pulled into the machine by friction-drive belts on the front of the machine. The Orion model features an angled film unwind system that minimizes the length and complexity of the film travel.

A sensor detects the location of the edge of the film just before the forming tube and allows for automatic positioning of the entire film carriage to maintain the proper tracking through the machine. The film passes first through a series of dancer bars that control a brake on the film spindle, then through an adjustable printer registration roller at the top of the vf/f/s machine.

A Model AK-7 hot-stamp printer from Norwood Marking Systems, Div. of ITW, is mounted on the back stand of the machine between the dancers and the adjustable printer registration roller which is used to correctly position the print on the film. This printer applies a lot code and use-before date.

A photo eye detects the registration mark on printed film and adjusts the film travel through the horizontal sealing zone. An encoder tracks the film length and allows for accurate bag length with or without registration marks.
The film travels over a top roller and down the front of the unit, where vertical belts on opposite sides of the forming tube pull it past the forming/fill tube. A heated platen makes an overlap seal against the forming tube after the film has been pulled to the proper length. A self-centering system on the drive belts allows for faster set up when changing to a different forming tube.

Next, the film passes through the horizontal sealing jaws, which are driven by a high performance micro-stepper drive system from Danaher Motion. The sealing faces, which are made of hardened electroplated tool steel, are heated by cartridge units. The process seals the top of the lower bag and the bottom of the bag above it.

Product drops intermittently from the o 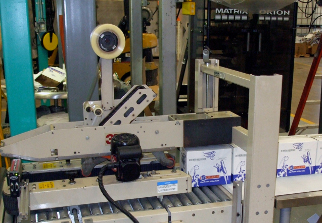 verhead weighing unit through the forming tube into the formed cylinder of film just as the cross seal is made. During each sealing cycle, before the jaws disengage, an air-actuated blade shoots out from the center of the jaws and cuts the lower bag loose from the upper bag. The filled bags drop onto a conveyor that transports them to the manual loading station on the cartoner.

The machine incorporates Matrix's SmartJaw ST sealing system in which the opening width of the jaws can be adjusted so larger products can more easily drop into the bag. This adjustment is made for each package.
The Matrix Orion vf/f/s machine incorporates an Allen Bradley MicroLogix 1200 PLC control system from Rockwell Automation and a 7-inch color touchscreen HMI from Kessler-Ellis Products.

The operator enters the operating data for each product, and the information is retained in memory and can be recalled from the touch¬screen. In addition to displaying the settings currently in use, the operator can call up maintenance and trouble-shooting information, such as causes of operating problems and maintenance requirements.

Kay's Processing installed an existing Adco Manufacturing Inc. Model 15D105 hand-load cartoner in the line. It picks carton blanks from a magazine with suction cups on a rotating wheel and forms the cartons, which are placed on a conveyor that carries them through a hand-loading area where workers place bags of product into the cartons as they pass by. The conveyor then carries the filled cartons though the closing section on the machine.
Workers push the cartons leaving the cartoner through a tabletop 3M machine that tapes the top flaps shut, after which the cartons are hand packed into shippers and are palletized.

Matrix vf/f/s packaging machines enable Kay's Processing to meet customer demand for the company's 35 snacks and foods without adding maintenance staff, Massoud says, "Not only does the equipment eliminate personnel costs, but the Matrix machine also gives us the ability to make quick changeovers and the flexibility to use various types of films to meet customer requirements.

"We don't have an engineering staff and we employ only one maintenance person, so equipment suppliers' service and support capabilities are critical to preventing downtime," Massoud continues. "Matrix personnel have trained our people, and they came to our plant when we were starting up the last machine. They've fixed anything that we have had problems with."