Film has a gift for special effects

Some of packaging's most satisfying moments come when containers coincide with concepts. At Coty's Lancaster Group U.S. in New York City, these moments happened twice.

"They occurred," senior packaging manager Sandra M. Marianelli informs PD, "because, with holiday packaging, there are so many beautiful things that it's very hard to be noticed. So we had to come up with a big bang in every retail setting, first by improving the perception of an established fragrance collection and then by creating something very special for a newer one."

Both the well-accepted Davidoff Cool Water for women and men and the year-old Isabella Rossellini's Manifesto collection for women benefit from a high level of packaging innovation in the sets introduced in October by Lancaster. With primary packages filled in France, the focus of the new structures are vivid interpretations that demand to be noticed and hopefully bought by what Marianelli describes as ?a generation of consumers willing to spend on affordable luxuries."

Lancaster is attempting to reach this generation by floating a technological advance into new territory. The packages employ what is believed to be the first commercial use of a special effects film with paperboard. Initially adopted to label rigid tubes and compacts (see PD, Nov. '99, p. 3), the material, Aurora™ film from Engelhard, relates remarkably to the Cool Water theme.

A many-layered polyester/acrylic coextrusion that permits a huge range of colors, the film used for the Davidoff setup boxes for women is a special run of Aurora 8531 RG that provides an aqua effect with sunset tones. For the men's version, 8531 BG yields a royal blue with purplish accents. In both, emphasizing linearity captures the aquatic effect of the decoration. Each film, though only 0.7-mil thick, has 113 layers in its optical core. 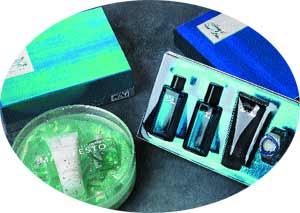 For both box lids, the film is laminated to a .070 C1S paperboard by R. Hochman that uses a technology codeveloped with Lancaster. The box bases are wrapped with a structured, bright-silver foil lamination, with blue foil used on the inside. The lid is mounted on a .060 white, vat-dyed board. The base and collar, respectively, use .060 and .050 chipboard, both covered with .060 bright-silver or matched-blue metallized foil paper from Hampden Papers. Components are set up in a full, tight wrap with corner stays by Burt Rigid Box, which also applies a pressure-sensitive label with the Davidoff Cool Water logotype in matching silver and blue. The label is converted by Kroger Packaging and consists of a Fasson S246 bright silver foil with blue custom leaf stamping, embossing and ultraviolet lacquer application.

Manifestly original
The same level of originality is apparent in the gift packages for Isabella Rossellini's Manifesto fragrances.

Remarkably, they're based on stock components from Lombardi Design. The round base, injection-molded of general-purpose polystyrene, is a pearlescent green with textured finish. A transparent friction-fit lid, molded of the same resin, is hot-stamped in two colors with the logo and a seemingly random pattern of silver flecks, resembling diamond chips sprinkled on a glass sheet.

A trick in maintaining an exact fit of the two components, says a Lombardi spokesperson, is control during molding to obtain a straight profile within .004-in. in the beauty gap (the space between the lid and base). The lid's transparency enables the consumer to view the primary packages suspended in round thermoforms. These are 30-mil water-clear vinyl units produced by Plastic Ingenuity.

With both packages, the impact of the floating packages is intensified by a cloth-like drape set into the bases, made with Englehard's Aurora 2311 iridescent mint film in a 0.7-mil gauge with an embossed pattern. The dramatic effect of this touch is enhanced by the play of light reflecting from the packages in the retail setting. Beyond their marketing effectiveness, the round PS containers ?are attractive enough for consumers to want to retain for reuse," Marianelli feels.

All of the packages for both collections are provided with removable labels to promote their gift functions. Kroger converts the p-s labels using a Fasson .060 C1S white stock with removable 195 adhesive and .050 kraft liner. It prints the stock in two colors on a Webtron flexographic press and then keeps them unobtrusive with a matte lacquer.

In the Lancaster gift packaging program, only one concern troubles Sandra Marianelli: "How do we come up with an equally sparkling sequel for 2002?," she asks.