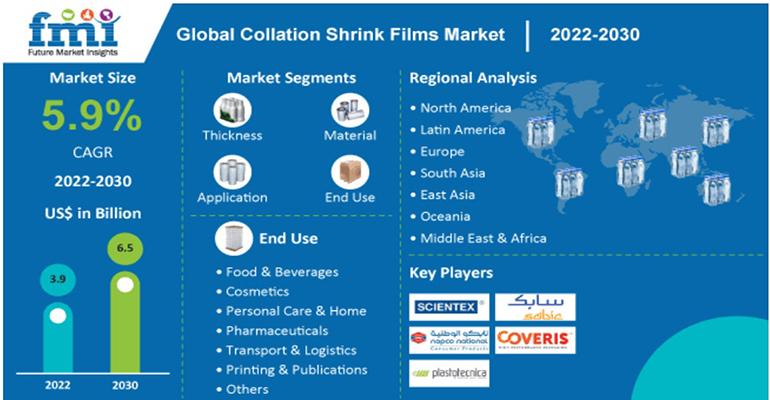 Market research firm FMI predicts the market will expand to $6.5 billion in the next eight years, aided by a COVID-driven shift toward increased food safety.

The global collation shrink-films market is poised for impressive growth, based on data in the recently released Collation Shrink Films Market Outlook study from Future Marketing Insights (FMI). The report estimates the market will grow at a compound annual growth rate (CAGR) of 5.9% between 2022 and 2030, reaching $6.5 billion by 2030.

Applications driving the growth will include ecommerce packaging for products such as personal-care items, food, beverages, cosmetics, and pharmaceuticals.

“Most of the key players are continuously focusing on the development of extra-thin collation shrink films, which will offer maximum impact protection to the stored products during transportation,” said an FMI research analyst in a prepared statement.

“Companies are coming up with the new technologies that will manufacture nearly 10-micron-thin collation shrink films, which are stiff and provide a firm grip to the package,” the analyst added. Collation-shrink films also provide tamper- and moisture-proofing for ecommerce deliveries.

The use of collation shrink films for bottles and cans will drive these applications to a cumulative value of $774 million by 2025.

As for Europe, the report predicts the German collation shrink film market will represent an incremental opportunity of $24 million by the end of 2025. In Mexico, where the number of key players is increasing, the market is expected to grow at a potential CAGR of 7.1% between 2020 and 2030.

Technological drivers include collation shrink films with five or more layers. These multi-layer films are relatively stiff and are available in extra-thin gauges, reducing packaging waste and costs.