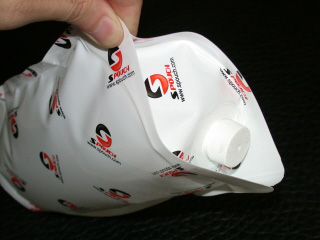 Looking at the many introductions of ‘new’ products in stand-up pouches this packaging format has gained a lot of popularity in the USA, in part because of the requirement to minimize solid waste, in part because of cost, and in part for the possibilities to increase shelf appeal as they allow for excellent billboarding within the retail aisle.

An early stand-up pouch design (US Patent 3,380,646) was devised by the Doyen Brothers in France. That pouch design, including many variants, is still in use today. It is, in fact, the dominant style. The basic Doyen design consists of two flat sheets sealed together along their sides, with a “W” fold running along the bottom. When the pouch is filled, the “W” opens and provides a base on which the pouch can stand. The original Doyen design showed the top being sealed straight across, but subsequent modifications include fitments to allow the pouch to be re-closed after opening. 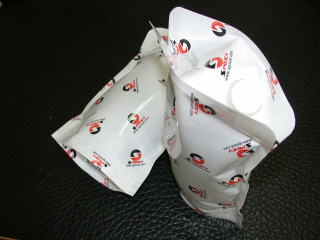 Some years ago I heard somebody, I don’t remember who, characterising a stand-up pouch as a pouttle, being a contraction of the words pouch and bottle. That word is not really correct for the standard stand-up pouch, but certainly characterises this new development from the Taiwanese engineer Wayne Chang.

Making a tube as body and sealing not one but two gussets (one at the bottom and one at the top with the spout) into the tube, the pouch not only looks as a bottle but stands more perfect and stabile and doesn’t tip over when half emptied as most of the tri-angular tapered Doy-packs do. This revolutionary design, called the S-Pouch, has more advantages as it can be filled, according to the designer, up to 90-97% of the pack size or in other words the same content offers a reduction in pouch size of up to 20%, resulting in 15-20% material reduction in comparison to the standard stand-up pouch.

The S-Pouch can be made from any film material while the spout, positioned outside the printed area as it is sealed in the top gusset, is made from PE with a same food grade as the spouts used by Tetra Pak or SIG Combibloc in their paper-based packs. With this positioning of the spout a large diameter of 15mm to 40mm can be used. The pouttles are filled though the spout.
Simply defined this pouch is a flexible bottle. 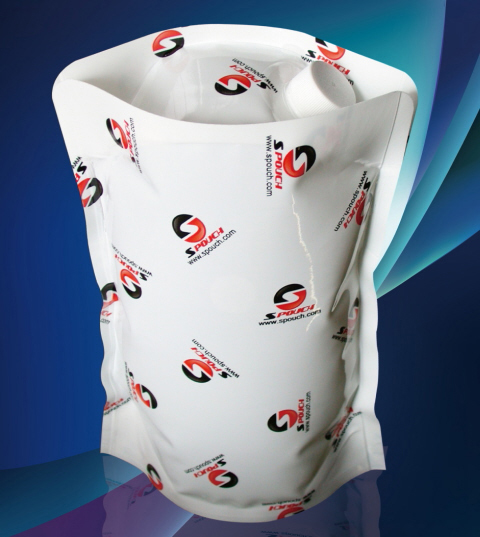 Wayne Chang also designed the pouch-making machine, similar to the Totani or Nishibe machinery, but has changed the flow of the films going into the machine in order to seal the spout at the inside of the gusset material before the gussets are sealed into the pouch. He uses 3 flat films, one for the body, making a tube and two for each gusset.

Certainly a revolutionary stand-up pouch.
*
The Packaging Dictionary has been updated extensively per Sept. 09, 2009. A large number of definitions, particularly for the pharmaceutical and medical branch has been added, as well as various printing definitions. Looking for a packaging related definition?