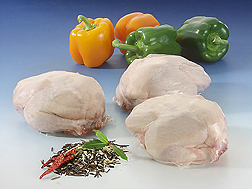 The new ShrinkPak thermoformer and film system has been introduced for applications that include poultry, fresh meat cuts and roasts, cooked ham and cheese, fish and processed-meat consumer packs. According to the co., ShrinkPak thermoformers are hygienic, quick to load and are easy to operate via an interactive, intuitive panel with a large touchscreen and can be customized to suit specific customer needs. The system's ShrinkPak films are based on the co.'s 3D shrink-bag technology and are said to stand out due to their thermoforming properties and 3D shrinkage of more than 40 percent. Food producers can choose to pack product with a shrink film as the bottom, as well as top film, or the co. offers version with a rigid film, a top web and a shrink film as the bottom web using C-base and eXbase(®) rigid films.