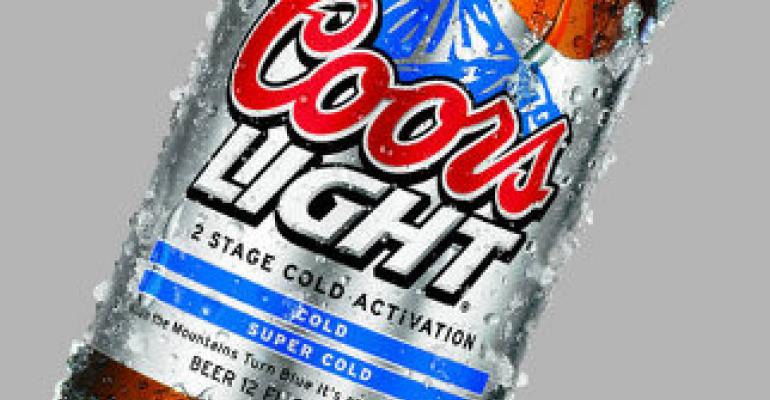 The World's Most Refreshing Beer continues to out-cold itself, as Coors Light packaging now features a new design that tells you when your beer reaches the "peak of refreshment." As part of its upcoming Super Cold Summer, the brand is debuting the latest in cold-activated technology: New Coors Light Two-Stage Activation bottles and cans, which make it easy to see when your Coors Light goes from cold... to Super Cold.

Studies indicate more than 70 percent of legal-drinking-age men have put their beer in the freezer to achieve the desired level of cold. The trick is to know when to take the beer out. Now on Coors Light bottles and cans, the iconic mountains still turn blue when the beer is cold, and in addition, a new Cold Indicator bar will turn blue at the same time. Then, when the Coors Light temperature is at the peak of refreshment, a second Super Cold Indicator bar turns blue.

Starting this month, the launch of Coors Light Two-Stage Cold Activation will be supported in many ways from coast to coast. The brand is amping up its advertising support by rolling out 11 new TV spots touting Two-Stage Super Cold Activation. These include new creative featuring entertainment mogul Ice Cube in two ads, titled "Cold Talk" and "Cold Challenge," that depict a humorous stand-off between Ice Cube -- hip hop star, actor, screenwriter, director and producer -- and Super Cold Activated Coors Light in a battle over who is colder.

Coors Light is celebrating the debut of its newest innovation with an iced-out N.E.R.D. concert May 25 in Atlanta. Tickets to the invitation-only event are being awarded solely through local radio prizing and retail promotions, but for consumers who can't be there, the concert will be simulcast on the brand's Facebook page and on Ustream.tv. This is the first of many ice-clusive special events Coors Light is hosting across the country this summer.

From a digital standpoint, the Coors Light Facebook page will introduce "The Master of Cold," an online champion for Super Cold refreshment. His focus is on upgrading average consumer experiences -- how to go from cold to Super Cold. The Master of Cold will introduce and promote exclusive content and behind-the-scenes access on the Coors Light Facebook page and the brand's YouTube channel.

As an extension of the Two-Stage Cold Activation packaging launch, nearly 3,500 beer retailers who meet certain criteria to ensure Coors Light is Super Cold at the point of purchase will be "Super Cold Certified" this spring. The retailers will display a neon sign as evidence that the Coors Light in their store is Super Cold.