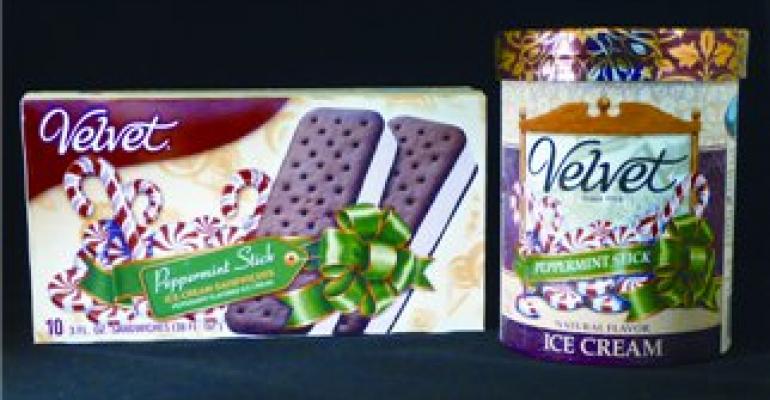 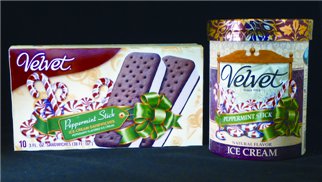 Velvet Ice Cream, Utica, OH, debuts a seasonal ice cream novelty in packaging that encourages gift giving and presentation during holiday celebrations. The ice cream sandwich was inspired by one of the company's seasonal favorites-its Peppermint Stick Ice Cream-and is made with peppermint ice cream that is extruded between two chocolate wafers, wrapped and unitized in packs of 10.

This is a new format for Velvet Ice Cream, which uses 12-pack cartons for its non-seasonal ice cream sandwiches. Moving to this smaller carton required more than just adjusting the number of sandwiches being placed into a carton.

"Our machinery was all geared towards the 12-pack," production manager Ken Harold explains. "A 12-pack box is filled from the end of the box, so the box is very rigid and very stable; 10-pack cartons are filled from the opposite side-the length side of the carton. The box is not as rigid, so it's a more difficult box to fill." 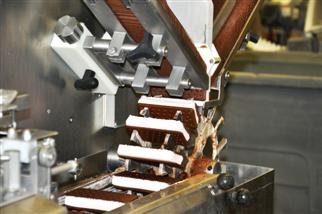 The peppermint ice cream is extruded by the system between two wafers traveling on a wheel. Plain white clay-coated wrappers, supplied by Zimmer Custom-Made Packaging, envelop the just-assembled treats.
The wrapped sandwiches are then conveyed to the cartoning area, where they are placed into 10-pack cartons. Hot-melt adhesive is applied to the carton ends for closure.

Date coding is integrated into the Norse Dairy sandwich manufacture, wrapping and cartoning system, which impresses a code into the paperboard. Velvet places dates of manufacture not expiry dates on the cartons' end flaps.

"We do not put a best-by date code on these items because, under normal condition, which is frozen, and expected turn, there should be little deterioration in the quality of those items," Harold explains. "If we're looking at stuff a couple of years from now, that's a different story. A best-by date on an ice cream product is not the norm. Certain manufacturers do, but the majority of ice cream manufacturers do not."

While the company prefers the simplicity of a manufacture date only on its own products, Velvet will accommodate requests from its private-label customers for a best-by date.

Both its own branded products and its private-label products benefit from the automated system, which eliminates human touch from manufacturing to primary and then secondary packaging.

"There's no human touch from the sandwiches coming out of the filler clear to the end of the production line where they're get put into the corrugated box," Harold remarks. "The benefits are safety, sanitation and also a reduction in labor." The system makes and packages an average of 120 sandwiches/min. 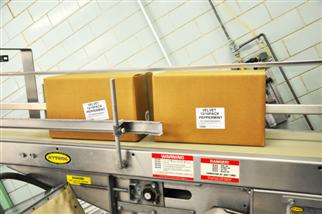 The line is run with only two operators: one filler operator and one to manually pack products into cases.
Case packing is the only manual part of the operation and is something new for Velvet. "Prior to this, we were doing sleeves," Harold remarks. "We are still using sleeves for all of our other ice cream sandwiches." At time of publication, the manual process has a line worker erect cases, supplied by Pro-Pak Industries, who then places cartons of sandwiches into the cases, presses a shipping label on them and inserts the cases into a mechanical case taper. Sealed cases exit onto a Hytrol Conveyor Co. conveyor.

Within a fairly tight deadline, Graphic Packaging was able to convert and print a 10-pack four-color carton with an aqueous coating at its Elk Grove Village, IL plant. The cartons were lithographically printed on a 60-in. KBA N.A. Inc. Rapida press at speeds averaging 12,000 sheets/hr. The printed sheets were cut to size on a Bobst Group N.A. Inc. die cutter, and then glued together using one of 14 different straight-line glue machines at this Graphic Packaging location.

To ensure cost efficiencies and turnaround speed for its clients, Graphic Packaging gangs up jobs from several package printing customers on a single sheet. It uses EskoArtwork ArtPro for prepress and, in the case of Velvet, received Adobe Illustrator files from Velvet marketing coordinator Nathan Arnold. These artwork files were designed by Asen Strategic Advertising & Marketing Inc.

According to Mark Perriguey, Asen senior designer and creative director, the gift idea originated from the fact that the novelty is only available for a limited time.

"Because this isn't available year-round, it needed to appear more as if it were a special gift in the freezer case-whether or not you bought it as a gift," he remarks. Unlike the task for Graphic Packaging, where the package structure was a major consideration, Asen's prime charge was creating a compelling look.

"Changing the size and the count was not the issue for us," Perriguey remarks. "We were really more concerned about making sure that the packaging was bright and would be easily visible in a freezer case." 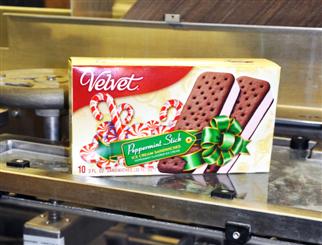 Perriguey had to contend with lighting issues inherent in an upright freezer case display, where most of the lighting is above the products at the top of the case. "So you need bright packaging that's easy to see," he says. "And this was a pretty quick project. From winning the job, initial concept, working on the project and then delivering actual production files, I don't think there was even a three-week delay."

During all phases of the design process, Asen dedicated two staffers to the job. Perriguey says much of the design project's success can be attributed to a one specific Velvet employee who does a lot more than his title of marketing coordinator conveys. "The driving force behind this, on Velvet's end, is Nathan Arnold," he remarks, "and we had three major wins on this project." These wins include:1. The packaging was completed on budget.2. It was turned around quickly.3. The carton design fits in with the look of Velvet's other novelties.

"We have high expectations of this product," says Luconda Dager, president of Velvet Ice Cream. "We're really excited because each year we get dozen of phone calls asking, ‘When is peppermint ice cream coming out?,' The consumers know it's a feature flavor so it's on the shelf for a limited time. I know many consumers will buy four to six packages at one time and just stockpile our packaged ice cream at home. So we're hoping they'd do the same with the ice cream sandwiches."

While awaiting consumer feedback, Velvet is already getting positive feedback from its retail customers. "What we heard from the buyers was that they had not seen anything like this before," Dager says. "So it's something new to the industry. We have seen some mint chocolate chip ice cream sandwiches but nothing seasonal like this peppermint-stick ice cream sandwich."