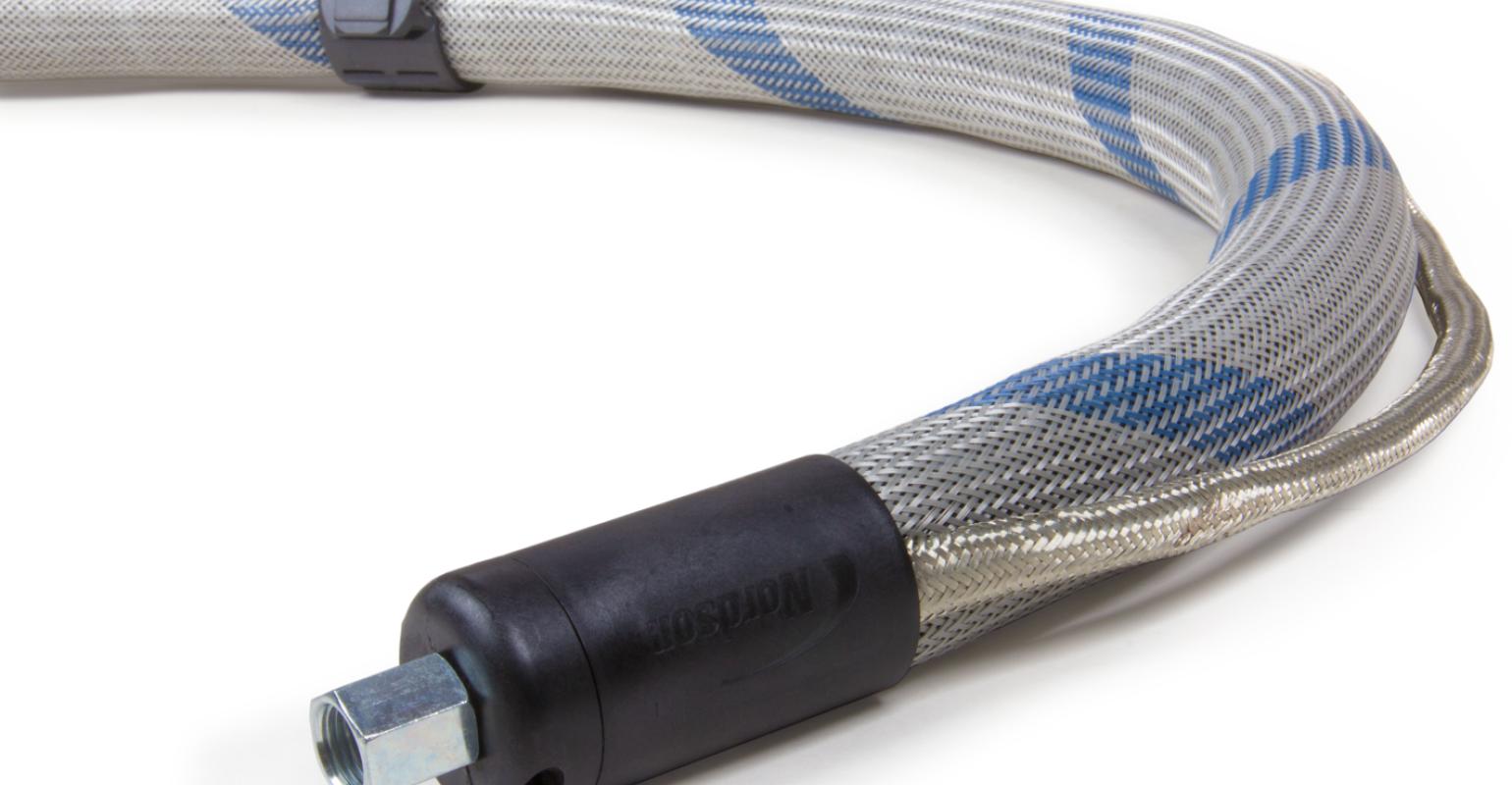 By preventing adhesive degradation, the new PureFlow hose for hot-melt systems prevents unscheduled downtime due to restricted adhesive flow or charred pieces breaking away and blocking the nozzle. It also minimizes preventive maintenance and hose replacement.

Developed by Nordson for its adhesive applicators, the patent-pending PureFlow hose features proprietary construction and technology to keep adhesives “fresh.” According to the company, “Adhesive degradation can lead to nozzle-clogging char, resulting in costly downtime and pop-opens, and can affect the rheology of the adhesive, yielding poor adhesive processing and machine pollution. Polluted and deteriorated adhesive can ultimately interfere with creating strong bonds on a package.”

PureFlow hoses can handle standard and reactive hot-melt adhesives. They also come standard with RediFlex II hangers for easy installation, when integrated into a parent machine, for example. According to the company, “Mounting hoses on a parent machine frame prevents damage, while routing provisions in the hangers provide a space for bundling a solenoid cable and air tubing with the hose.

According to your press release, PureFlow hoses “drastically reduce the effects of adhesive degradation.” Can you put a number (time or percentage of reduction) to that?

Can you put a number (time or percentage) to the improved uptime on an adhesive system with the PureFlow hoses?

Clark: Due to the wide variances in applications, it would be difficult to gather enough data to give a meaningful answer.

What is the added cost of PureFlow hoses on a system or will all future systems use these are standard equipment?

Clark: These hoses are offered as a premium value and performance option. Our systems are not preconfigured with any specific hose, so the customer is free to choose the correct combination of value for their budget and operation.

When/how did you get the idea for this new hose style?

Clark: PureFlow hoses were created as part of Nordson’s ongoing technology development initiative. They are targeted to our customers whose product quality or production uptime is negatively impacted when adhesive degrades. These hoses can provide benefits as a singular upgrade, or be coupled with other Nordson technologies to bring the utmost performance and operational efficiency to the customer.

How often do you have to change typical hoses because reactive PUR adhesives have cured within the hose and restricted the flow?

Clark: This is application-specific, but some customers using PUR change as frequently as every three months. Some of our packaging customers change hoses every year or two when they do routine maintenance on their machine (requiring movement of their hoses) to prevent break away char from contaminating nozzles. There are, of course, some customers who don’t change hoses until there is a true hard failure, which can be decades for a Nordson hose. (Thus, the latter wouldn’t really be a good candidate for a PureFlow hose.)

How often do you have to change a PureFlow hose?

Clark: We expect to at least double the useful life of hoses, relative to the current useful life.

Is a PureFlow hose stiffer or more flexible than the previous hose and why?

Clark: It’s about the same.

Has the new hose been in beta test anywhere? If so, where and what were the results?

Clark: Yes, but our non-disclosure agreements prevent us from discussing the specifics. The results, however, are being used to provide much of the information contained in this conversation and in our press release.

Can PureFlow hoses be retrofit to existing systems? If so, which systems?

Clark: Yes, they fit all systems that can use a Blue Series hose (our basic packaging hose). PureFlow hoses are available in the same lengths as Blue Series hoses as well. [Editor’s note: Standard lengths kept in stock are 4, 6, 8, 10, 12 and 16 feet, but any length can be special ordered.]

Do those systems have to already be equipped with RediFlex II mounts?

Clark: The RediFlex II hangers, which are included with the hoses, are part of a mounting system intended to secure the hose to the parent machine or other structure where the hose is routed. It is not used for connection to the hot melt system itself. Use of the mounting system is not required to connect or make use of the PureFlow hoses, but the customer can add the RediFlex II frame mounts to an existing parent machine if they wish to use the incorporated hangers.

How many hoses are on a typical system?

Clark: The most common number of hoses used with a ProBlue melter is two, but three or four is quite common.