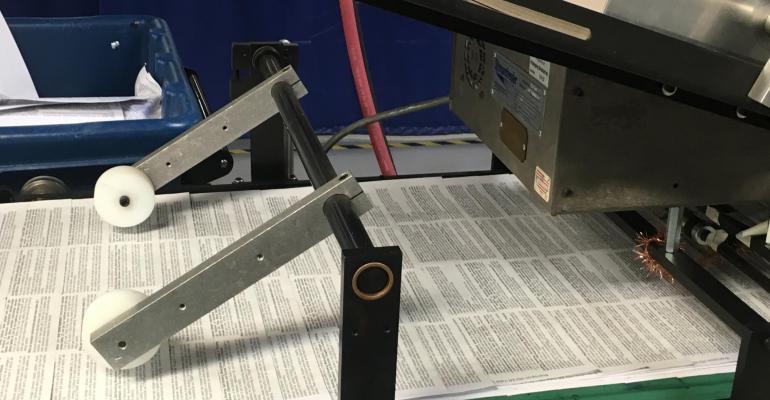 As Platinum Press has grown and established itself in the pharmaceutical industry as a printer of packaging components, Senior VP of Corporate Strategy and Development Andrew Vale realized that a second site was needed to provide the redundancy expected by the industry. To that end, the company recently opened its second printing facility in late 2015 in Oakland, NJ.

The new facility successfully replicates the production and quality procedures of its Grand Prairie, TX, facility, but Vale has even bigger plans in store for the new state-of-the-art operations. “Ultimately, we anticipate it will be a fully digital site,” says Vale. The Oakland site currently produces printed inserts and medication guides on Didi offset presses, and the company is bringing in one insert folder at a time. It will begin printing labels once the company installs a new digital press, which Vale says the company is currently selecting.

Platinum Press had installed a Xeikon digital printing press in Grand Prairie in to complement its flexographic and offset printers. But “now we’re looking to replace our flexo printer with a digital printer for labels and cartons,” says Vale.

The company has been seeing smaller orders in pharma, for instance around 5000 to 20,000 labels. Vale believes it is a deepening trend, which could be driven in part by the growth in generics. “Generics tend to produce a lot of different items—several hundred different products,” he says.

While such short runs have been served by the changeover-friendly digital printing, Vale expects that newer presses can handle much more. He believes that gains in technology could position digital presses to take on some of the more-traditionally sized runs.

“Digital presses have been around, but they have been expensive and slow,” he says. “But run speeds are getting faster and faster. One press we’re looking at can run as fast as a flexo press.”

And with digital, there’s also “less press space required,” he says. “Our Mark Andy P5 flexo is 50 ft long, whereas digital presses can be the size of a dining room table.”

The reason Platinum Press hasn’t moved over sooner has to do with color, says Vale, such as handling spot colors and metallics. “But it is being addressed, as is color consistency. Some systems are even adopting offset inks to produce them digitally—offset is top-notch in quality and better than flexo,” he says. “The key [for us] is to support customers’ colors.”

“Digital will take over the industry,” he predicts.

Platinum Press’s new facility has already had 20 customer audits. “Industry has to approve a site for us to produce out of it,” he explains. “Auditors are looking to ensure our systems and procedures meet expectations at the site.”

The company had originally considered a location in Pine Brook, but determined it was “unsuitable for printing, given its high ceilings and the difficulty in maintaining the relative humidity ideal for printing,” he says. A property in Oakland that had originally been considered was decided upon after the landlord leveled existing offices and gave Platinum Press a “blank slate” on which to build 47,000 sq ft of production space. The building itself is 150,000 sq ft, so there’s room for growth, he adds.

Vale says the company even considered buying competitors to establish a facility in the Northeast, “but we decided to build it from the ground up,” he says. “We didn’t want two separate companies. In fact, we have one phone number for both facilities, and our PA system pages people located at both sites, so it feels like one company.”

Packaging design for safe dosing and other topics will be discussed during the June 16 conference at EastPack, "Ensuring Patient Safety & Product Efficacy Through Successful Packaging," held in New York City.