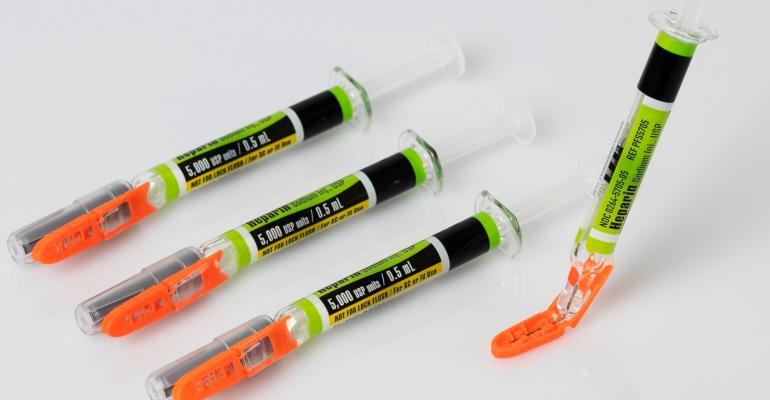 The compact Needle-Trap label safely captures a syringe’s needle after an injection.

A needle-securing label on medical packaging from B. Braun Medical Inc. is protecting healthcare workers and patients from needlestick injuries. The Needle-Trap label system, developed by Schreiner MediPharm, is used on B. Braun’s Heparin Sodium Injection USP prefilled syringes.

Needle-Trap labels incorporate a plastic component that secures the syringe’s needle after an injection. B. Braun believes the package, which launched in the United States in April 2019, is the first prefilled heparin syringe with integrated needle protection to gain U.S. Food and Drug Administration (FDA) approval.

Schreiner MediPharm reports that Needle-Trap also complies with the U.S. National Institute for Occupational Safety and Health (NIOSH) requirements for safe instruments. The labeling system is used outside the United States, as well.

When and where did Needle-Trap launch?

Dul: Needle-Trap was launched in some European Union (EU) countries starting in 2009 and has since then been widely used on an international scale.

What medications is it used for?

Dul: More than 820 million units have been produced since its market launch in 2009. Needle-Trap is used for medications such as heparins, vaccines or biosimilars (such as epoetin).

What benefits does Needle-Trap offer healthcare workers and/or patients, in addition to eliminating needlestick injuries?

Dul: Needle-Trap offers additional benefits to end users, since it is easy and intuitive to use. View of the needle is unobstructed, enabling the user to retain full control of the injection process. The content of the syringe, the graduation or air bubbles can be easily detected. The protection mechanism is activated in a controlled manner, using one hand, and with an irreversible and clearly noticeable effect.

Due to its compact design, Needle-Trap does not need a lot of space when it comes to transport, storage and disposal.

Additional functions may be integrated in the Needle-Trap label to further enhance patient and product safety. For instance, detachable label parts for efficient documentation and tracing of the medication in the medical records, graduation for safe dosing or security features for counterfeiting protection.

Who administers Needle-Trap Heparin Sodium injections to patients? Are they always administered in a healthcare setting?

Dul: Needle-Trap heparin injections are typically administered in a healthcare setting but can also be administered by patients themselves, following instructions from their healthcare provider.

How does the healthcare professional or patient dispose of a used Needle-Trap? Is there language on the Needle-Trap label explaining proper disposal?

Dul: Used prefilled syringes with the activated Needle-Trap should be put in an FDA-cleared sharps-disposal container. Detailed instructions on proper disposal can usually be found on the leaflets that come with the outer packaging, as well as online.

Are filling-line modifications or new equipment required to fill medication into Needle-Trap syringes?

Dul: The normal filling process of the syringes is not affected by Needle-Trap, since it is a label-integrated safety device. The plastic needle catcher is an integral part of the label. After the filling process, the Needle-Trap label is applied to the prefilled syringes on conventional dispensing machines, requiring only minor modifications.