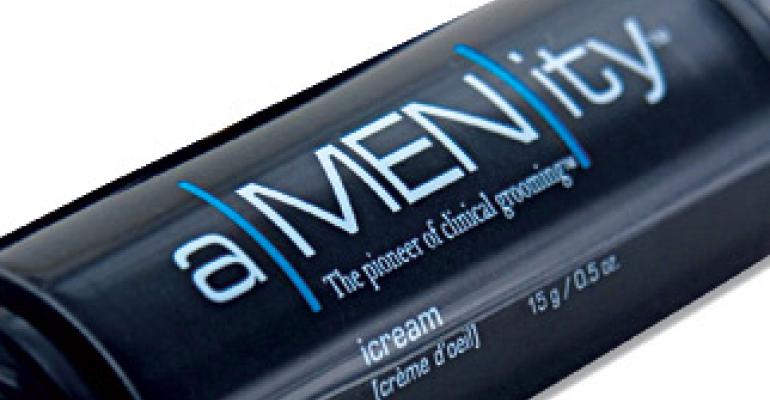 Increasing awareness about personal appearance and healthy lifestyles among modern males is changing attitudes toward the use of skincare products by men. Yet, today's health and beauty marketplace is very much the product of an industry dominated by products marketed to women. Men who want to chuck the traditional bar soap and aftershave routine often are left with few choices or stuck secretly raiding the medicine cabinet for skincare products made for the women in their lives.


Lisa Lehan, Kimberly Pecoraro and Dwight Schultheis, all veterans of the personal care industry, co-founded Amenity to scientifically develop products that specifically address men's needs and preferences. These product formulations are made to address problems specific to men's skin, which Lehan says is generally more oily and tougher than women's skin, and/or offer no-fuss application with immediate results.

Because the eye area is much smaller than the entire face, iCream, one of the company's newest products, targets the dark circle, fine line and wrinkle issues that both men and women have, Lehan explains. While the eye cream's formulation is actually unisex, its packaging is decidedly masculine—a shiny black, 4.5-in.-long airless, metered dose (AMD) pen from packaging development company Lucas Packaging Group [LPG(www.lucaspackaging.com)].


According to Lehan, the oval-shaped pen fit right into the company's no-nonsense approach to skincare. Instead of forcing a man who might not be familiar with eye cream to learn how much cream to use and how to avoid contaminating the product, the pen offers a perfectly metered dose with contamination-free dispensing and storage.

The 15-ml oval pen is the newest addition to LPG's family of AMD pens. Lehan says she consistently goes to LPG president Frank Francavilla first when researching new packaging because she wants “to be the first one out there with a cool, new package.”

Because Lehan leads the packaging discovery process and is one of the primary decision-makers in the company, she is able to get a jump on the competition and the packaging arena. “Frank would come out with these new packages, and he might have interest from the big guys like a [Estée] Lauder, but we could move the fastest,” says Lehan. “For us, it [the situation] was great, because it almost seemed as if we had exclusive, new packaging, because we could move quicker than anybody else.”

Based on Amenity's experience with the airless pen used for its Anti-Breakout Gel, the skincare company suggested that the new pen not have a lock. The anti-breakout gel is in a pen that is locked for shipment. Upon purchasing, a consumer turns a knob until the dispenser “clicks” into the open position. He then removes the pen's end-cap and pushes the knob once to dispense the gel. After the consumer applies the gel to his face, he replaces the cap and turns the knob back to the locked position. While this ensures the portability of the product, it also was a somewhat complicated process that sometimes would confuse customers. “On the [iCream] cap, there are two pieces of plastic on the cap that go into two holes on the side that kind of keep it in place,” Lehan explains. “So when you are pressing the button to push it up, the bezel up, the air's not pushing it out and the cap stays on.”

Another change that Amenity requested was to give the slightly tapered pen strong, straight lines. “Anything to me that's tapered has a feminine feel,” she remarks.

The black, molded plastic tubes are decorated using a hot transfer label process, which enables high-resolution photographic quality decorating on the package without the seam of a shrink-sleeve label.


Typically, the process first involves a high-resolution image being etched onto a printing plate, which then is mounted on a rotogravure press. The web press prints the images at resolutions that can be as high as those used for high-end commercial print applications, such as magazines.

The printed web becomes part of a multilayer film that includes an indexing roll in addition to a print layer and an adhesion layer. Heat is used to remove the ink from the print and adhesion layers. This process adds a protective layer over the packaging decoration thus protecting the decoration from scratch and chemical damage.

“If someone dispenses a product with alcohol or other aggressive ingredients, these ingredients could actually eat other types of decoration,” says Francavilla. “This process provides a protective coating for scratch- or chemical-resistance, yet it's a very high-end process that's somewhat cost-effective.”

He argues that an operator using pad printing to decorate a package with a multicolor image would need to apply the ink to the container several times to get the desired effect. The customer, then, would incur setup charges for multiple runs. The heat-transfer label process requires only one pass to affix the label onto the packaging. The cost savings from the reduction in setup charges can help offset the higher costs associated with heat-transfer's high-end prepress processes. “It kind of balances itself out as far as the cost point of view, so we use it as our standard,” says Francavilla. “For example, a label like Amenity's, I believe it's a 14-cent process. If she had to do the same label in a traditional screen print, they would charge her at least eight to nine cents per pass, so she would be looking at a minimum of 16 or 20 cents just for decoration.”

While Amenity was working with LPG on the container itself, the company also was working with Suite-K Value-Added Services (www.suite-k.com) on the cream's formulation. “We started speaking with Suite-K about developing the iCream for us,” Lehan recalls. To ensure that the product would have the correct viscosity for proper dosing, she gave Suite-K a sample pen as soon as a prototype was made.

After working with Suite-K on iCream's formulation, Amenity eventually decided to have Suite-K also do the product manufacturing and filling. After winning the manufacturing and filling business, Suite-K immediately began research and tweaking its packaging process for use with the pen. “We have mechanics onsite who have years of experience and by having a sample of the packaging beforehand, they were able to figure out the filling strategy,” recalls Millie Donado, director of business development for Suite-K.


After working with the pens, the contract manufacturer/packager decided the risk of damaging the pen caps was too great to use a highly automated filling process. Line workers manually unpack pens onto a Hytrol conveyor (www.hytrol.com). The pen travels to a filling station, where an operator uses a Servo/Fill semi-automatic filler from Oden Corp. (www.odencorp.com) to dispense the cream into the pen.

Because the pens are molded in a shiny black plastic, the standard black ink used by Suite-K when coding with its Excel Series 100 CIJ printer from Videojet Technologies (www.videojet.com) simply didn't show up. According to Donado, it took several tries to find just the right shade of matte black to be visible on the tube.

While Suite-K was perfecting the packaging line, its lab was working with Amenity on the formula. This prevented delays to the product development schedule. In fact, it was only when developing this story did Amenity learn about the steps Suite-K took to ensure flawless filling. “While we were working on the actual formula, they must have been working on this, which is lovely because I didn't have any headaches,” Lehan remarks.

While keeping costs low is important for a skincare company, she says the most important resource is time. “You can sit there and plan and plan and plan,” Lehan explains. “When it comes time to actually putting the product out there, you are always under the gun. Anything you can do to cut time in the end is always helpful.”