Eight O’clock Coffee is celebrating its 150th anniversary with a package redesign. But, they’re taking an interesting approach to the process – they’re letting their customers pick the final design. Making it even better, entrants into the contest can win five grand worth of groceries out of the deal.

Here’s what the company says about it in a press release:

This year marks Eight O’clock Coffee’s 150th anniversary, making them one of the country’s most time-honored brands. To celebrate this occasion, the coffee company is treating their packaging to a facelift — and asking consumers to help pick the new look.

From February 1 through March 15, 2009, consumers can log on to CoffeeMakeover.com to view two new Eight O’Clock Coffee package designs. Vote for the look they like best, and you’ll be entered into a sweepstakes to win a year’s worth of groceries ($5,000)!

Return each day during the promotion period to vote again (earning another entry for a year’s worth of groceries) - and for a chance to win other valuable prizes. (No purchase necessary to enter. Please see complete rules at www.CoffeeMakeover.com.) Eight O’Clock Coffee will announce the winning bag design on March 16, 2009 at www.CoffeeMakeover.com and at www.EightOClock.com.

An interesting approach – nice way for a brand to connect with its customers. And that can surely only add to its authenticity.

The history of the brand is pretty interesting too. It’s not all that common that a house brand successfully gets built into a stand-alone national brand. But that’s the case with Eight O’Clock, which gradually evolved beyond the A&P grocery store chain in the 1970s until finally being spun off into its own brand in 2003.

I have to confess though, based on the two choices I’ll be kind of sad to see the brand’s bold, classic scheme get dilluted this much. But they’re both good designs, and either would probably do well for the product.

And beyond that, I’m glad to see it’s still around. 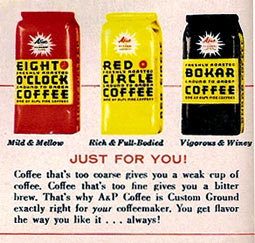 For me, Eight O’Clock has a personal connection that goes back long before I could drink coffee. I have fond memories of my great grandmother going to the A&P in Antioch, Illinois and buying Bokar Coffee, which is now a sub brand of Eight O’Clock. I remember her pouring the bag into the grinder, hearing that pleasingly obnoxious sound of the machine, and then smelling that nice, fresh aroma when it was done. Ahhh. A beautiful memory.

Isn’t that the kind of thing great brands are made of?

Incidentally, my great grandmother lived to be 93 years old. Maybe it was the coffee? I’d better get a pound or two just in case.