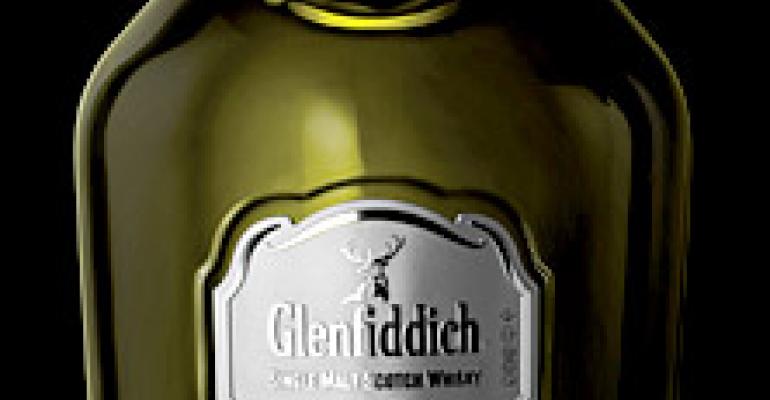 Glenfiddich, the world's most awarded Single Malt Scotch Whisky, announced the U.S. launch of its much-heralded Glenfiddich 50 Year Old expression. One of the rarest and most precious expressions of authentic Single Malt Whisky ever released by Scotland's most distinguished distillery, Glenfiddich 50 Year Old will be available in extremely limited supply, with only a handful of bottles available in the U.S.

Beginning in December, Glenfiddich 50 Year Old will be available exclusively at three U.S. hotels, with one additional bottle scheduled to be sold at a charity auction on December 7, making this one of the most sought-after expressions of Glenfiddich ever released.

For half a century, two casks of whisky have aged gently in Glenfiddich's Warehouse 8, under the watchful eye of the industry's longest-serving and most experienced Malt Master, David Stewart. As a consequence of this care and attention, Glenfiddich 50 Year Old is imbued with a unique preciousness that only time can bring, and remains remarkably light and elegant on the palate. The nose is beautifully harmonious with an uplifting, vibrant and complex aroma. The taste is initially sweet with a zesty orange marmalade and vanilla toffee, which then cascades through a wonderful series of layers: aromatic herbs, floral and soft fruits, silky oak tannin and hints of gentle smoke. The finish is exceptionally long with a touch of dry oak and the merest trace of peat.

"Time and tradition, and a small, significant measure of the unknown have contributed to making every drop of this beautifully-matured fifty year old whisky, some of the most precious Glenfiddich has to offer," said David Stewart. "It is some of our finest whisky, nurtured over many years by generations of dedicated and distinguished long-serving craftsmen using techniques lost to most other distilleries. Only an independent, family-owned distillery can remain true to its founding principles and continually pioneer in its pursuit of excellence." 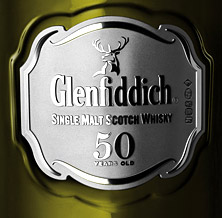 In addition to this, the packaging, rich with authenticity and heritage, also reflects the excellence of the whisky: Design cues have been painstakingly taken from archives that record the distillery's 120 year history; the hand-blown bottles are individually numbered and presented in beautifully hand-stitched, leather-bound cases, which were inspired by William Grant's personal ledgers.

"As the world's most awarded Single Malt Scotch Whisky, Glenfiddich has a long tradition of innovation and setting the benchmark for quality" said Caspar MacRae, Category Director - Scotches, William Grant & Sons USA. "The introduction of Glenfiddich 50 is a testament to the quality and pioneering spirit that has gone into the production of Glenfiddich for more than 120 years."

American buyers will have the opportunity to bid for the sole bottle available for home purchase in the U.S. at a charity auction event, held simultaneously at New York's Mandarin Oriental hotel, Miami's Fontainebleau hotel and the Peninsula hotel in Los Angeles on December 7.

These hotels will also be the only places where the whisky will be available by the glass, until the next batch is released in 2010. Proceeds of the auction, which will be conducted by Christie's Head of North American Wine Sales Charles Curtis MW, will go to Friends of Scotland, the charity founded by Sir Sean Connery, dedicated to advancing contemporary Scottish causes in the United States via educational scholarships, and to benefit veterans of foreign wars. In addition, Sir Sean has agreed to provide the winning bidder with a personal letter. Interested bidders should contact 646-356-8350 for the opportunity to take part in the auction.