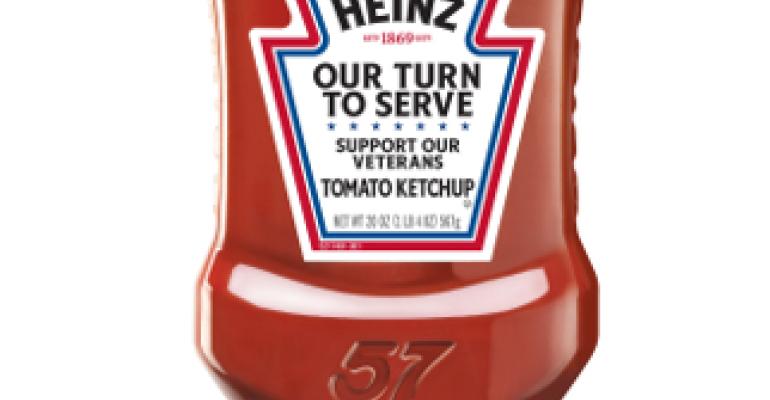 Heinz Our Turn to Serve label 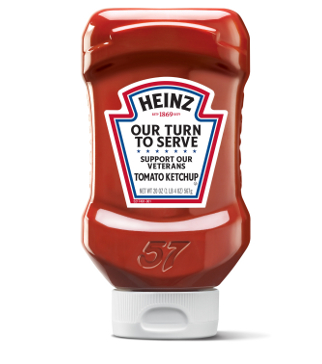 With Veterans Day approaching, Heinz Ketchup is making it easy for Americans to pour on their appreciation for those who have served our country with a charitable campaign that celebrates veterans while also raising awareness and money for Wounded Warrior Project, a nonprofit, nonpartisan organization that honors and empowers wounded warriors.

The patriotic promotion touts the phrase "Our Turn to Serve" on Heinz Ketchup bottles in participating restaurants nationwide and encourages people to scan a quick response (QR) code on the back of 20-ounce bottles with a smart phone to send a personalized thank you to veterans. For each "thank you" sent and each "like" on the Heinz Ketchup Facebook page, Heinz will donate 57 cents, up to $200,000, to Wounded Warrior Project. Together, the H.J. Heinz Co. L.P. and the Heinz Foundation will collectively donate more than $300,000 to Wounded Warrior Project this year alone.

Observed on November 11, Veterans Day honors and thanks the 24.9 million military veterans in the United States for their loyal service. "We are thrilled to partner with Wounded Warrior Project to remind people to appreciate the veterans who have served our country," says Scott Bacco, brand manager for Heinz Ketchup. "As America's Favorite Ketchup, it seems fitting to give back to the men and women who have served and protected our country."

The Ketchup campaign for veterans includes a partnership with the USO. Each custom "thank you" created through the campaign will be sent as a postcard through the USO to a veteran or active military service member with a personal message of appreciation. In addition to sending thanks, the campaign also offers consumers the ability to make their own donations directly to Wounded Warrior Project and to learn more out how to become involved with veterans programs in their local communities.

"We often hear that consumers want to get involved in celebrating Veterans Day, but don't know how," says Adam Silva, chief development officer for Wounded Warrior Project. "Our hope is that this partnership with Heinz Ketchup creates an easy entry point for people to support our veterans."

To further drive awareness and recognize veterans, Heinz is extending part of the campaign to bottles in grocery stores, with special-edition bottles that feature "Thank You Veterans" on the front label.

Heinz has a long history of supporting veterans and giving to soldiers. In fact, the company even converted one of its plants to manufacture parts for planes in World War II. During this time, almost half of Heinz's total food production went to the Allied armed forces. In addition to sending ketchup and pickles, the company made special rations for soldiers. For more information on Heinz Ketchup's cause campaign to support veterans, visit a participating restaurant that carries the Heinz 20-ounce Heinz Ketchup bottle.