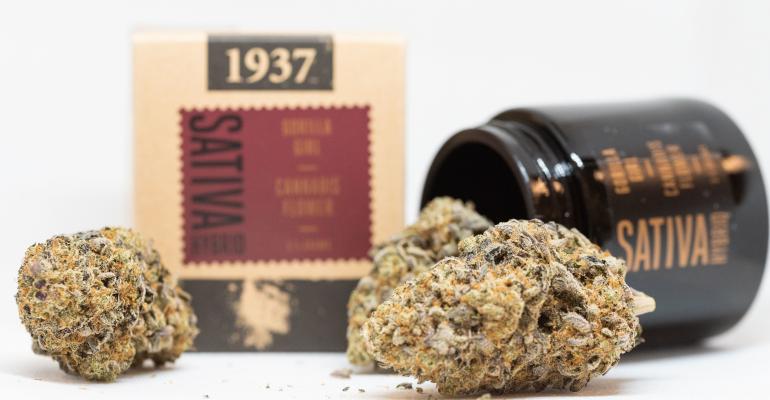 Protecting the flavor of cannabis flower throughout distribution starts with preserving the terpenes in the flower. Vireo Health International, a Minneapolis-based cannabis company, has developed a packaging design that does exactly that.

The company’s patent-pending TerpSafe packaging curbs the gradual loss of terpenes and other compounds after harvest, protecting the flavor of retail cannabis flower. Terpenes are organic compounds that give distinctive aromas to various types of cannabis.

Closure design is the key element in Vireo’s new packaging: The lid features an aeration compartment that contains a tablet infused with terpenes (see image in slideshow). Over time, those terpenes infuse the cannabis flower. Vireo has signed an exclusive licensing agreement with eBottles420 to manufacture and distribute the terpene-preserving packaging system.

Using lab testing and real-world analyses, Vireo determined that cannabis flower in conventional packaging lost almost half its native terpenes within four weeks of storage in the package. In contrast, terpene content increased over the same period when the flower was packed in TerpSafe packaging.

Eric Greenbaum, Vireo’s chief science officer, invented the terpene-preserving packaging concept after conversations with the company’s internal cultivation team and other cannabis cultivators revealed that one of their biggest concerns was the loss of terpenes from their cannabis.

“Terpenes are the volatile compounds in cannabis and other plants responsible for their characteristic taste and aroma profiles. Terpenes may also be responsible for various pharmacological properties of cannabis, in particular the differing effects of different strains. Due to their volatile nature, they tend to evaporate rapidly,” Greenbaum explains.

In addition to helping cannabis cultivators and consumers, Vireo’s terpene-preserving packaging could provide benefits for packagers of food, beverages, and health/beauty products that contain their own terpenes. Greenbaum answers questions from Packaging Digest about the packaging concept’s development, commercialization, and potential applications.

Greenbaum: Vireo’s scientific director, Justin Bueno, Ph.D., set up a series of controlled experiments to assess the function of the TerpSafe technology. The analytical terpene-quantification testing was performed by a state-licensed, third-party lab blind to the conditions of the experiment. The terpene analysis was completed using gas chromatography, the standard industry method for terpene assessment. This work is pending publication (accepted manuscript) in a peer-reviewed scientific journal.

Does the terpene-preserving benefit continue after the container has been purchased and opened by the consumer?

Greenbaum: This is what sets TerpSafe apart from conventional terpene-preserving packaging. The TerpSafe package will continue to reinfuse the product after multiple openings. Dr. Bueno’s experiments were designed to test this exact question. His experimental design included conditions where the bottles were opened periodically over a period of weeks and conclusively showed that the terpene-preservation capabilities of our system are not adversely affected by multiple openings over time.

Is Vireo working on licensing this terpene-preserving packaging technology to companies in industries beyond cannabis?

Greenbaum: Vireo assessed non-cannabinoid terpenes and other volatiles during the development phase. This packaging system would be applicable for any product for which a long-lasting scent profile is desirable.

We are currently working with eBottles, which provides packaging solutions to multiple industries, including pharma, nutraceutical, and cannabis. Another interesting application would be with spices. The ability to preserve an intense flavor/scent profile with dried basil or rosemary, for example, would likely find immediate utility in that market.

How is the closure assembled?

Greenbaum: The closure assembly process is pretty straightforward and easy. In fact, we worked with eBottles to ensure that the TerpSafe line of packaging will assemble just like standard cannabis packaging. The system is being rolled out such that it will be compatible with manual or automated assembly. It will be up to the end users and dependent on what equipment they have.

How does the cost of the TerpSafe closure compare with the cost of a standard closure for this type of package?

Greenbaum: The system is marginally more expensive — less than 25 cents per package. We are confident that this slight increase in cost will provide meaningful ROI [return on investment] to cultivators insofar as it will result in longer functional shelf life and higher-quality cannabis for the end user.

What are the cannabis jars made of?

Greenbaum: The current iteration of our TerpSafe product is a closure system that incorporates the preservation elements into the cap. This enables the implementation of the system in a variety of eBottles jars — plastic, glass, large, and small.

Is the terpene-preserving packaging child-resistant?

Greenbaum: The packaging is child-resistant to the same ASTM standard used in the cannabis industry. The child-resistance mechanism is the same press lock seen on 53-mm containers sold by eBottles.

Did Vireo develop the terpene-saving packaging technology in-house or in partnership with eBottles420?

Greenbaum: Initial development work and technical proof-of-concept work was done by Vireo’s internal R&D team. Nik Goran, Vireo’s engineering director, led the collaboration with the eBottles team to finalize a go-to-market strategy and the initial products. We can’t say enough great things about the eBottles team — Robert Lerman and Mike Scudder. They’ve been amazing partners, and we would not have been able to come to market so rapidly without their collaboration.