Or are they insane like a rockstar? Not sure.

I love soda pop, especially the richer, sugar-instead-of-corn syrup variety like they used to make (and still do in Mexico). So it’s with open arms that I greet the new Pepsi Natural, which is hitting stores right about now. Made from supposedly all-natural ingredients and sweetened with real sugar rather than the usual high-fructose corn syrup, this looks like a delish little throwback to soda’s golden age.

But from a branding standpoint, I dunno. Around the Packaging Digest office, when I’d mention “Pepsi Natural,” I kept getting the doggie-tilting-its-head look accompanied by, “Pepsi … NATURAL?”

Seems the idea of America’s second favorite cola actually being Natural seems to bring about a certain dissonance in the branding. It’s apparently kind of like McDonalds trying to be ultra healthy – if we wanted that we’d go to Panera, or better yet brown-bag a salad.

So, it’ll be interesting to see what consumers’ take on this new drink will be.

Could it serve more than anything else to just muddy up a product line that’s already pretty heavily extended? Or are there maybe enough real soda connoisseurs out there who are willing to pay the extra to get a better version of Pepsi? 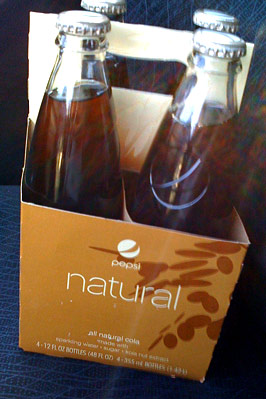 I guess once the research is done and the checks are written, there’s only one way to find out – put it out there and see what happens.

It’s a nice looking bottle, if nothing else. Kinda’ reminds a bit of the cool glass bottle that paradoxically used to contain that awful Diet Rite Cola back in the day. But maybe I’m the only fossil that noticed that. Also looks a bit like the Michelob beer bottle.

But again, that ain’t a bad look either.

All-in-all I’m looking forward to trying Pepsi Natural. I’d better get some quickly though. With the corporation’s bad record with branding lately, Pepsi Natural might be just another fleeting moment in soda-pop history.