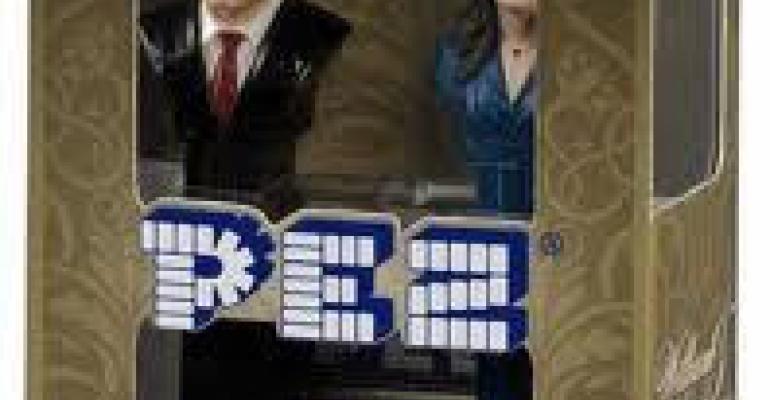 PEZ collectors are gathering this weekend in Stamford, CN, just in time

for some royal chatter: The iconic candy company with its U.S. headquarters in
Orange has created Prince William and Kate PEZ dispensers for an online charity
auction.

It's a one-of-a-kind pair and it won't be mass produced, the company said -- so
the set commemorating the Wedding of the Century could well break the all-time
record for a PEZ dispenser.

PEZ is auctioning the set on eBay's British website and will donate the proceeds
to a charity supported by the royal couple, Starlight, for seriously and
terminally ill children. Bids are open through April 17, in plenty of time for
the buyer to bring the plastic prize to the April 29 nuptials.

PEZ collectors are holding their 13th annual convention, kwhere they will trade and admire some of the
rarer examples of the candy dispensers, which PEZ cranks out at a rate of about
80 million a year.

For the collectors, news of the royal couple dispenser is bittersweet.

"Any publicity about PEZ is good because it brings more people into the hobby,"
said Richard Belyski of Myrtle Beach, S.C., editor of PEZ Collectors News and
organizer of the convention.

But, he said, "I had people come to the convention and say, 'When are they going
to sell more of them?' People would like to have a set and they're upset that
they can't buy one, but PEZ people are very giving people, and they understand
that the money is going to a good cause."

The company produces about 65 models a year of the dispenser, in plants in China
and Hungary, said Keith Whitaker, vice president of marketing for PEZ Candy Inc.
USA. The plant in Orange makes the candy itself for the U.S. market -- but the
royal set will have candy made in Europe.

PEZ, with between 200 and 225 employees in Connecticut, is building a visitor
center in Orange, which is scheduled to oepn in September, Whitaker said.

It's rare for PEZ to produce one-of-a-kind dispensers, and of course the set
could go to a royals collector, not a PEZ collector -- so the likely selling
price is anyone's guess.

PEZ says the highest price ever fetched was $32,000 for the "Astronaut B"
dispenser in 2006, but Belyski doesn't believe that sale ever closed. A verified
sale was a space gun model for more than $6,000, he said, and the royal couple
could go higher than that, especially since it's a charity sale.

"This wholly original item will symbolise appreciation for our extensive
community of collectors as well as serving a charitable purpose. The 'eBay for
Charity' auction enables us to achieve both these aims," said PEZ marketing
chief Gabriele Hofinger, in a release.

It is "rumoured," PEZ allows in its best British deadpan, "that the eBay idea
originated from eBay founder Pierre Omidyar for his girlfriend: She is a keen
PEZ collector, and wanted to set up an online platform for exchanging the PEZ
figurines."