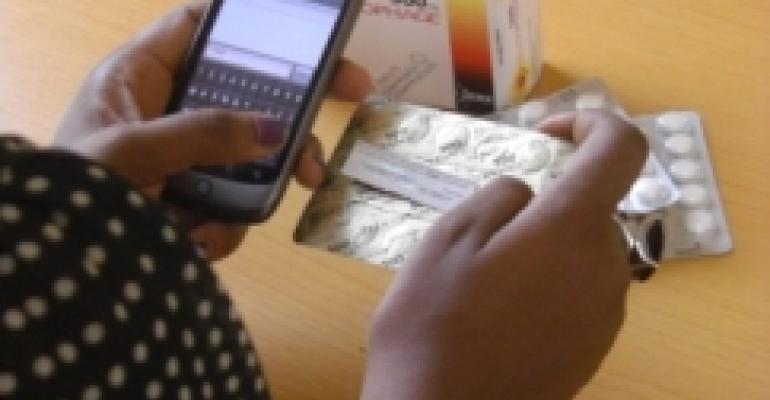 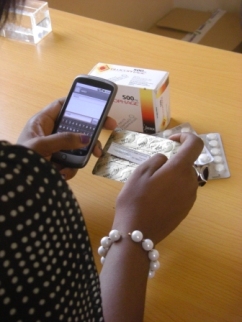 In Africa, drug counterfeiting is a huge concern. According to the World Health Organization, up to 30 percent of all drugs taken by patients in the developing world aren't authentic. This illegal activity drains approximately $75 billion from the pockets of legitimate pharmaceutical companies. More importantly, fake drugs threaten the lives of the patients who believe the medications they're taking are real; in 2008, more than 80 Nigerian children died after taking counterfeit cold medication that contained antifreeze.

Mobile Product Authentication (MPA) technology from Sproxil is designed to combat the problem. The technology allows consumers to verify a product's authentication at the time of purchase or use, using unique identifiers or codes on each package. Response to the technology has been significant; in January, the protection service received its millionth request for drug authenticity verification.

According to Alden Zecha, Sproxil CFO and chief strategist, the product succeeds by offering a unique and necessary service to pharmaceuticals in the region.

"This is the first solution that addresses the consumer-level verification that is really necessary in emerging markets," he says.

In the U.S., pharmacists are likely to fill a prescription bottle for patients at the time of purchase, but in countries like Nigeria and Kenya, most pharmaceuticals are sold pre-packaged. For the consumer to be confident that the drug is real, Zecha states, authentication needs to be put in his or her hands; retailers, clerks or distribution warehouses could be a source of tampering.

Dr. Paul Orhii, director general of Nigeria's National Agency for Food and Drug Administration and Control, says, "This technology puts the power of detection of counterfeits in the hands of millions of Nigerian consumers, thereby enlisting them in the war against counterfeiting." 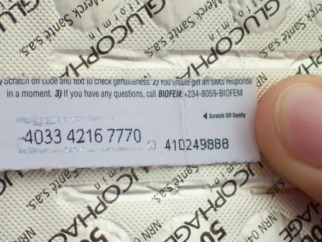 Sproxil works with drug manufacturers and their packaging partners on mass serialization. The product gets unique identifiers on each package; this can be performed at the factory in the manufacturing line, or in a controlled environment post-manufacturing but prior to distribution in the supply chain. Having the manufacturer handle the process in the factory or a secure location before distribution ensures the package isn't messed with by an unethical distributor looking to make a quick buck.

Next, the products move through the standard retail distribution chain; because the technology is on the pack and verified by consumers, no change in distribution practices or behaviors is necessary. At the time of purchase, the consumer does three
things:
• They expose or reveal the coating on the package. While Zecha relates that nearly all clients to date have used tamper-evident protection over the code on the pack via a scratch-off code, the unique code also can be overt.
• The consumer sends the code to Sproxil's system via text message, phone call to the company's call center or via the web; because in Africa there's a relatively low market penetration of data- and web-capable smartphones, text is the prevalent method of messaging.
• The Sproxil system processes the code to verify if the product is safe and authentic. Depending on what Sproxil finds out about the product when decoding, the message back to the consumer can be different. If the product is authentic and safe, the user gets a code back telling them it's real and okay to use. Because literacy rates are low in the markets served by Sproxil, the message is usually simple-the word "OK" and then information about the product (name, dosage and other formulary info). If the manufacturer chooses, the basic information can be supplemented with targeted messages specific to the drug-if it's a diabetes treatment, for example, the user could be advised to watch his sugar intake. A phone number is provided for additional follow-up. 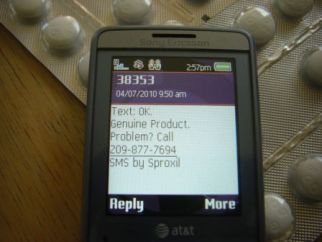 The product also could be determined to be authentic, but the code might have been used. The most common reason is user or phone error: the user might accidentally have sent the code twice, or transposed numbers when typing. In this case, the consumer receives a message advising them as such, and encourages him to try again. Or, the drug could be found to be authentic, but the package has passed its expiration date; in that case, the user receives a message indicating its use-by date has passed.

Putting it in place

According to Zacha, the MPA technology requires only minor modifications to a manufacturing operation.

"We can make it so simple that the manufacturer doesn't have to change anything at their factory if they don't want to," he says. "There is no requirement to purchase or lease equipment, and no capital equipment required. The ability for a pharmaceutical company to put it in play can be made simple." He adds that the system on the manufacturing end requires no specialized software; if the user chooses, they can opt for a system that uses a web interface.

However, if a manufacturer wants to implement a high-end MPA system, they can opt for high-speed automated production, printing and label application equipment. The user has a high degree of flexibility in choosing equipment to use with the Sproxil technology. 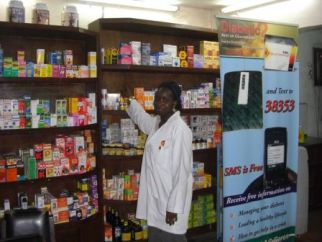 BIOFEM Pharmaceuticals is a large pharmaceutical distribution firm in Nigeria, importing and distributing more than 20 namebrand and generic drugs. Its offerings include Glucophage, a popular diabetes drug manufactured by Merck Sante s.a.s. in France. In 2009, BIOFEM discovered its products were plagued by counterfeiting. Crooks were leveraging the company's brand name and reputation to sell false products, and sales of the company's legitimate products had fallen 75 percent over the previous year.

After implementing the Sproxil system, the company saw dramatic results after just three months. Sales of Glucophage bounced back more than 10 percent and, according to a BIOFEM representative, the company received a return of 10 times what it invested in MPA.

Additionally, according to BIOFEM CEO Femi Soremekum, patients have come to rely on the technology: "No one will buy it now without the Sproxil label," he says.

While other technologies exist to verify product authenticity, Zecha says, Sproxil's MPA technology is different because unlike RFID, bar codes and other methodologies, it doesn't take the power to verify out of consumers' hands, or require specialized equipment.

"Sproxil stands out because it is a consumer-friendly solution," he says.

Further, the codes and labels containing them cannot be copied to defeat the system, unlike holograms.

In addition to providing consumers with peace of mind, Sproxil can be used to track down thieves and bring them to justice. One customer suspected they had had a batch of drugs stolen from them but could not determine exactly where in the supply chain the loss had occurred. Zecha says Sproxil representatives worked with the company to determine the product had in fact been stolen, and they set up a custom message for the product. When patients entered their code, they received additional messaging asking them to contact the call center.

By partnering with Sproxil, the manufacturer narrowed the point of theft to a single source-a legitimate wholesaler that unfortunately had "gone rogue," and arrests were made.

Sproxil's technology is designed to be easily adjustable, so that changes can be made in response to changing patient behavior or customer needs. For example, in recent months the company has made adjustments for wording messages in markets where literacy is an issue. Other adjustments leave greater room for patient error, and addition of a web portal where customers can review. This feature lets pharmaceutical companies monitor data beyond product authentification, such as how their products are being tested, checked and sold, how much time it takes the product to get from the factory to customers, and (through Google Maps) how far a product physically travels to get to users. After finding out consumers were contacting the call center with medical questions (such as dosing, interaction with other drugs and a host of doctor-specific queries), the company added the capability to pass a call onto the company or a physician.