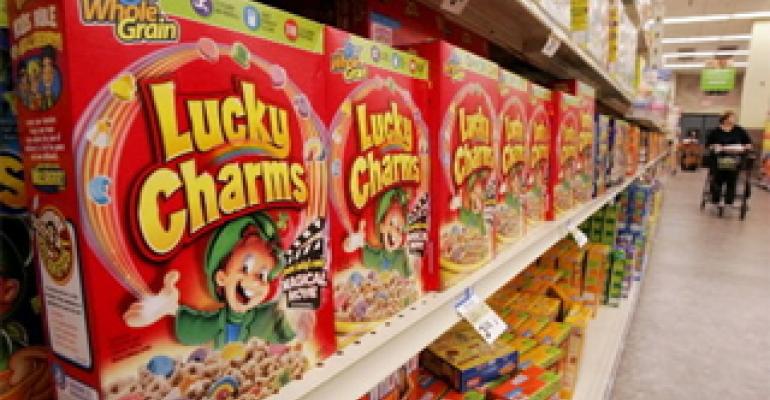 But the plan, not surprisingly, is less stringent than sweeping children's advertising recommendations that federal regulators recently issued, and that the industry fiercely opposes.

The new industry standards, which go into effect at the start of 2014, will force food companies to reduce sugar, salt and calories in some of their offerings -- if they still want to advertise them to kids.

Such product reformulations can be costly and time-consuming. And the industry acknowledges that about a third of products currently advertised to kids do not meet its new standards, meaning they'll probably require reformulation.
The industry's new ad playbook would also create a more level playing field. Many companies base their youth marketing efforts on their own criteria, but the agreement would apply the same standards to all participating foodmakers.

The new plan is "really a groundbreaking agreement with the leading food and beverage companies," said Elaine Kolish of the Children's Food and Beverage Advertising Initiative, a group the industry formed in 2006 to address marketing issues.

The industry's advertising initiative, run by the Council of Better Business Bureaus, currently has 17 members, including packaged-food behemoths Kraft Foods and Nestle.

"It's great news that at long last, the industry realizes that the current patchwork of inconsistent company pledges is not working, and that industry-wide nutrition guidelines are needed," said Margo Wootan, nutrition policy director at the Center for Science in the Public Interest (CSPI), a watchdog group.

With the industry's proposed standards, young children would continue to be bombarded with ads for junk food, according to CSPI.

The Federal Trade Commission (FTC) and several other government agencies were directed by Congress to come up with voluntary guidelines for marketing junk food to children, and those were issued earlier this year. The government guidelines are broad, discouraging ads for unhealthy food not only in the media, but also on packaging.
The industry's proposal would not include packaging.

The government also calls for broad limits on fats, sugars and sodium that would apply to marketing of all foods. The industry has suggested different guidelines for different foods -- a more practical approach, it says.
The cereal business, a big area for youth-oriented ads, offers an example of the differences between the government's approach and the industry's.

Such a difference could have a large impact on Golden Valley-based General Mills and Michigan's Kellogg, the nation's two cereal giants.

General Mills has been gradually cutting sugar levels in its kid-oriented cereals over the past three to four years, shifting from 12 to 15 grams per serving to 10 grams. Under the industry's guidelines, that would be good enough.
"In cereal, we are in excellent shape," said Tom Forsythe, a General Mills spokesman. For Kellogg to be in concert with the industry plan, it would have to shave 2 grams of sugar from hot-selling Froot Loops and Apple Jacks cereals.

And General Mills wouldn't be completely in the clear. Even under the industry's own ad guidelines, it would have to reduce sugar in its Go-Gurt kids' yogurt, as well as in some of its fruit snacks.

FTC Chairman Jon Leibowitz said Thursday that the government will consider the food companies' initiative as it continues to develop its own standards.

"The industry's uniform standards are a significant advance," Leibowitz said, "and are exactly the type of initiative the commission had in mind when we started pushing for self-regulation more than five years ago."