What are collaborative robots and why should you care? 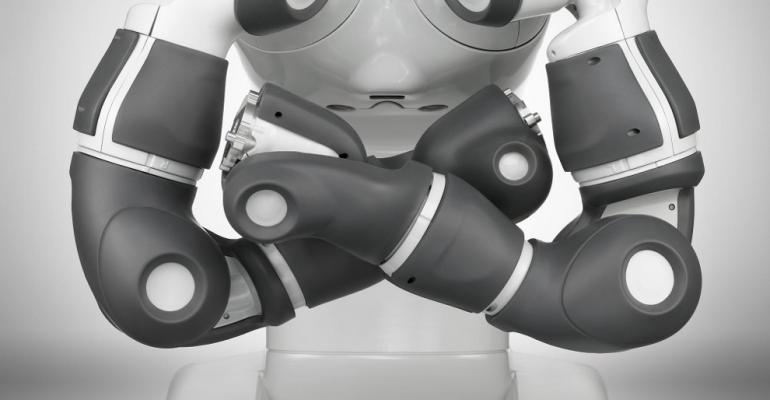 Like tigers at the zoo, and potentially as unpredictable and dangerous, robots have traditionally been kept in cages. For protection, workers were kept on the outside looking in.

In the past couple of years, a new kind of robot has done away with some of the cages. Collaborative robots, or cobots as they are known to the cognoscenti, are robots that are designed to operate collaboratively with humans. Packaging applications are limited mainly by imagination. Currently they are in use for lightweight operations (like placing products in trays or cases) to heavy duty applications (such as depalletizing and palletizing). This article will try to take some of the mystery out of them.

The first thing to know about collaborative robots is what they are not. As Pat Davison, director of standards for the Robotic Industry Assn. (RIA) told me: "Collaborative Robot is a verb, not a noun. The collaboration is dependent on what the robot is doing, not the robot itself."

Having said that, collaborative robots and applications generally combine some or all of the following characteristics:

• They are designed to be safe around people, either by force limiting to avoid injury if they touch, by sensors that prevent touching or by a combination of both.

• They are often relatively light weight and can be moved from task to task as needed.

• They do not require skill to program. Most cobots are simple enough that anyone who can use a smartphone or tablet can teach or program them.

• Collaborative robots are generally simpler than more traditional robots, which makes them cheaper to buy, operate and maintain.

Some cobots such as Rethink Robotics' Baxter, ABB’s YuMi or the URS robotic arms from Universal Robots are designed to work side by side with people with no guarding at all. That doesn't always mean that they should be. It is the application, not the robot, that determines safety requirements. Even an inherently safe cobot will require caging if it is working with dangerous loads like sharp knives. Others, such as palletizing/depalletizing robots designed to carry heavier loads, will still require cages. Modern sensors can allow these cages to be smaller, freeing up valuable floor space and allowing people to work more closely with them.

There are two basic approaches to making cobots safe. One approach, taken by Universal, Rethink and others, is to make the robot inherently safe. If it makes contact with a human co-worker, it immediately stops so that the worker feels no more than a gentle nudge. Rounded surfaces help make that nudge even gentler. This approach limits the maximum load that the robot can handle as well as the speed. A robot moving a 50-lb part at high speed is going to hurt no matter how quickly it can stop upon making contact.

A sensor-based approach allows collaborative use in faster and heavier applications. Traditionally, physical barriers such as cages or light curtains have been used to stop the robot when a person enters the perimeter. Modern sensors can be more discriminating, sensing not only the presence of a person but their location as well. This allows the robot to slow down, work around the person or stop as the situation demands to maintain safety. When the person moves away, the robot can automatically resume normal operation.

No discussion of robot safety can ignore the end-of-arm tooling (EOAT). If the robot and operator are handing parts back and forth, the tooling needs to be designed so that, if the person gets their fingers caught, they can't be hurt. There are several styles of grippers that, while capable of firmly gripping a part, are incapable of hurting flesh and bone. Grabit's static electricity fingers, Empire Robotics’ Versaball Gripper and Festo's soft fingers fill that bill, as do quick-acting suction cup grippers from companies like Piab and others.

Robots have come a long way in just the past 10 to 15 years. They used to be expensive, complicated machines that could be a bit scary to work with and required highly skilled technicians. Now they have become almost just another member of the team, working side by side and taking care of the ergonomically hazardous scut work nobody enjoys doing.

Interested in packaging and packaging automation? You’ll find that and a whole lot more during WestPack in Anaheim, CA, February 6-8, 2018. For more information, visit WestPack.