Tripping with crafted coffee can 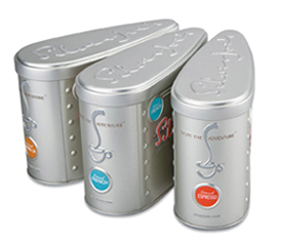 What a long, strange trip it has been. To traveling coffee lovers, at the rainbow's end, the pot of gold is really a sleek, silvery can, and they probably will prefer it that way.

Connecting visually, emotionally and viscerally, the departure from the common round can could help Silver Joe's Coffee Company of Everett, WA, make new inroads on the marketing map with a can that also forges a new link as the official coffee of DNR Airstream, Jackson Center, OH, marketer of the Airstream™ Series of travel trailers and touring coaches.

And all this before the first completed trade package of Silver Joe's® coffee is shipped. That's supposed to have happened late in November, when this issue of PD went to press.

For Silver Joe's, the slogan, “taste the adventure” is more than a theme. Since its agreement with DNR Airstream, it has been selling its line of premium coffees in traditional gusseted bags, while traveling to events where outfitters and related businesses and some consumers who take their overland travel seriously have been given samples of the coffees.

Meanwhile, the new can has also been traveling to those events since the summer, creating an instant icon aimed at setting Silver Joe's on the path to growth. It's working: But more on that further along.

The can itself, seen from above, seems like an exclamation point that lost its dot and went off its diet. It's a “streamlined teardrop” from the perspective of its designer Cameron Clement, brand development director of C3 Brandworks (www.c3brandworks.com) and a partner in Silver Joe's.

The start of can shipments appears to be simply the next phase in a conceptual continuum that began several years ago, Clement indicates to PD. In preparing for what's happening now, his identity system was starting to evolve.

Its first appearance is on the 12-oz bag from Pacific Bag, Inc. (www.pacificbag.com) for whole beans resulting from the agreement with DNR Airstream. Its key elements are a logotype containing the Silver Joe's signature script, an idealized travel trailer and the suggestion of a coffee cup with a plume of smoke rising from it, all elements delicately intertwined. These graphics are framed in studded, satin-silver finish that recalls riveted seams in a travel trailer. Then there's the script, selling line “Taste the Adventure.”

“When I first started on this system,” Clement recalls, “I knew Silver Joe's was using premium, 100-percent Arabica beans, and after the bag introduction, the need would be for a can that had a premium look and built-in expectations for quality.” So from several perspectives, the two packages evolved with ideas bouncing back and forth between them.

Early on, too, Clement's sketches for the can tend toward the teardrop configuration, becoming malleable as the 3D possibilities of the sidewalls eliminated some materials from consideration for performance, cost and other reasons.

“The teardrop shape came as the idealization of the travel trailer body captured me,” he says. “When my son, Fischer, and I began cutting, forming and gluing the shape out of paperboard, I felt the possibilities in my hands.”

The one direction that changes during this phase is the identification graphics factor. “Originally, I was thinking in terms of paper or film labels, which would simplify everything,” he explains. “Then I asked myself: What about metal? Why not direct printing?” 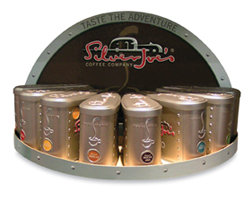 With the dawning of 2007 came the first pieces of the can from Planet Canit (www.planetcanit.com), which also produces the conforming friction-fit lid. From the beginning, the streaming structure worked.

The silvery material is not the anticipated aluminum. It is 25-ga tinplate steel. It is satin-finished and deeply embossed with the intertwined elements of the logotype. The Silver Joe's component is printed in red, the coffee cup in a café latte color and the idealized travel trailer shows through as a bright silver. Planet Canit prints the can via four-color-process lithography plus one tan tone and an overall varnish post-printing.

On the line, it feeds smoothly for automated filling with 11-oz quantities of ground coffee. Every other can nestles neatly, head-to-toe, for efficient casing and projected retail display.

How about identification for the projected initial eight varieties (these are house, organic decaf, Kona, mocha Java, espresso, French, hazelnut and vanilla)? Simple; Clement designs a circle emboss with two speed lines appearing on two sides and the wide end of each can.

The spot labels from WS Packaging Group (www.wspackaging.com) are color-coded. They're produced on a 2.6-mil white polypropylene pressure-sensitive stock, flexographically printed in one color, with the coffee variety printed in reverse. When applied to the can, the labels are recessed for protection from scuffing.

At the can's wide curved end, the embossed graphics are limited to the cup and smoke plume, the selling line, the label circle and the Silver Joe's web address.

Behind the Silver Joe's red signature, the can's narrow, curved end imparts copy: “Be relentless. Be unstoppable. Be good to your body and the environment. And don't forget the coffee, because for every victory big or small, when it's just you and your moment of personal adventure, it's nice to toast it with something pure, unjaded, uncarbonated [sic], something decidedly Joe.”

At the can's base, required copy regarding the company and its location, a brewing suggestion, the coffees' Fair Trade origins and the Airstream connection and website featuring Silver Joe's coffees, is something rather unusual. It's a credit for Planet Canit, run together with the can's design patent number.

“The folks at Silver Joe's and I felt Planet Canit did such an excellent job of producing and decorating this can, that it fully earned the credit,” Clement acknowledges.

There's one other component of his design system that especially delights him when turned into the tangible reality of a three-dimensional package: The embossed rivets on debossed vertical seams (one is real) on both sides of the can at its wide arc. They add so much to the package's tactile quality.

Completing that presentation is the stackable friction-fit lid, replete with Silver's Joe's signature graphic, printed with the café latte shade that stands out prominently against the satin silver finish. 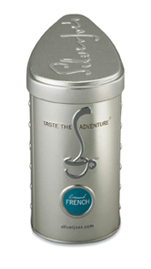 This package will travel far beyond the internet, which also has tremendous potential.

The ability to hold, turn over and carefully scrutinize the can, even when it isn't yet a trade package, adds immeasurably to its mystique at travel events involving DNR Airstream and Silver Joe's, Clement says. That's unsurprising. “During the initial design phase,” he says, “a prototype can was tested among several groups and ninety-nine percent of those tested stated they would buy the product at least once just to own the can.”

Silver Joe's president Terry Smith is pleased to provide consumers with that opportunity. “While we were showing the can at Airstream events and to premium-quality outfitters, outdoor retailers, bicycle shops and some catalog firms,” he informs PD, “we also started to talk with top-level grocers and specialty shops.

“Once their representatives held the cans, we realized that this package will travel far beyond the Internet, which also has tremendous potential. We learned this when we started selling the bags.

“So all of these people were just waiting for the first cases of trade packages to ship.”

And that's another surprise. Rather than a conduction-sealed outer tamper-evident band, Silver Joe's is sealing the can's flange with a film structure. The custom membrane material, produced by Selig Sealing Products (www.seligsealing.com), is (from the outside) .005-in polyethylene terephthalate/.001-in. foil/.005-in. paper/.0015-in. heat-seal layer. Selig regional account manager Jay Kelley explains that the paper layer facilitates the coffee's off gassing. Adds Enercon regional sales manager Al Szukalski, “It was our job to come up with a custom sealing head that would seal a container shaped like an Airstream trailer. We developed the capless induction sealer that would automatically instill tamper-evidence without cumbersome conduction sealing equipment.”

Enercon's induction cap sealer with a special tunnel directs the induction field across the film structure for in-line output. Thus, it avoids the traditional problem of induction sealing eddy currents that move in a circular path.

The solution is ingenious enough for Enercon to include it in its Induction Sealing Hall of Fame, with literature distributed at PACK EXPO Las Vegas 2007 (see PD, Oct. '07, p. 107 or at www.packagingdigest.com/newProductsAll/Equipment/2007-10-01.html).

Now, Silver Joe's can answer the question: Is coffee a recreational vehicle?