Earth Friendly Biodegradable Displays Have Arrived but Will Wary Consumers Pay the Price? 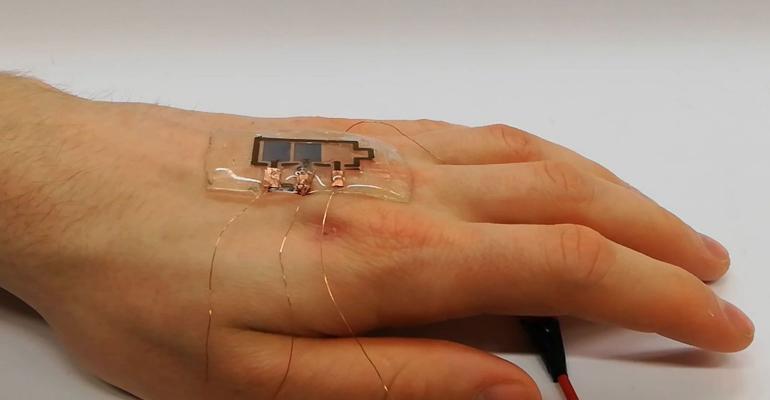 The electrochromic effect is used to create disposable display technology that can be composted after use.

Given the ubiquity of devices in our lives and the waste that they create, researchers have been seeking various solutions to create more environmentally friendly electronics and display technologies.

To this end, scientists in Germany have developed a new technology and technique for producing more sustainable displays for devices that can biodegrade and thus be discarded without producing pollution, they said.

A team from the Karlsruhe Institute of Technology (KIT) developed new display technology based on the so-called electrochromic effect of the organic material used in the display, which uses light absorption to change colors, researchers said. They produced the technology using inkjet printing.

“For the first time, we have demonstrated that it is possible to produce sustainable displays that are largely based on natural materials with the help of industrially relevant production methods,” said Manuel Pietsch, a researcher at  KIT’s Light Technology Institute (LTI) who works at the Heidelberg InnovationLab, in a press statement. “After use, these displays are no longer electronic scrap but can be composted.”

By using such sustainable technologies in combination with recycling and reuse, scientists hope their research “might help minimize or completely prevent some of the environmental impacts of electronic scrap,” he said.

Electrochromic display technology is created using electricity. When a voltage is applied, it modifies the light absorption of the material with which the display is made, which changes its color for visual display.

There are a number of benefits to using this technology in addition to its sustainability, researchers said. Electrochromic displays consume low amounts of energy and have a simple component architecture compared to commercially available displays, such as LED, LCD, and E-paper, researchers said.

Using print fabrication also makes them customizable, inexpensive, and material efficient, researchers said. Indeed, digital printing allows the displays to be tailored for use or created in complex shapes without any expensive modification of the process that reduces resource consumption, they said.

Moreover, materials used in the process are typically either organic or biocompatible. This creates a process that has a low overall impact on the environment, researchers noted.

Researchers published a report on their work in the journal Materials Chemistry.

The team envisions a number of short-lifecycle applications for their sustainable displays.

One is to develop wearable technologies in a user-friendly way, as the displays’ gelatine sealing makes them adhesive and able to be worn directly on the skin, researchers said. This creates viability for use in medical diagnostics to create disposable devices that can be discarded without creating electronic scrap.

The displays also can be used to create disposable sensors for quality monitoring in food packagings, which already is a single-use application, researchers added.