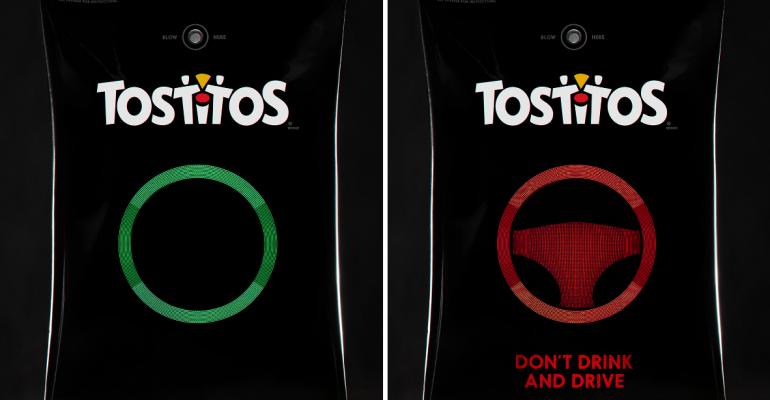 The limited-edition Tostitos Party Safe bag goes high tech with an alcohol sensor, LED lights and an NFC-enabled tag that calls Uber for a ride.

Some bags of Tostitos, the tortilla-chip snack from Frito-Lay, to be consumed at select Super Bowl parties on Feb. 5 will be able to tell partygoers what else they’ve been consuming.

Frito-Lay will distribute Tostitos bags with built-in alcohol sensors at selected Super Bowl LI events and parties on the day of the big game. The smart packaging, dubbed the Party Safe bag, will also enable football fans who have imbibed to summon an Uber ride with the tap of a smartphone, thanks to near-field communication (NFC) technology also incorporated into the bag.

The Party Safe bags are not being sold at retail, but are being furnished to selected venues as a way to raise awareness about the dangers of driving after drinking. Frito-Lay is doing the promotion in conjunction with Mothers Against Drunk Driving (MADD), and is targeting the Super Bowl, which is typically one of the worst days of the year for impaired driving. The Party Safe bags were introduced to a limited number of fans during the NFL’s conference championship games on Jan. 22, followed by a general announcement two days later.

The Party Safe bags feature LED lights and a sensor located on the front center of the bag, powered by an internal power strip. The user turns the bag on by pressing a button at the top left, then waits for the LED ring below the logo to go from spinning to a solid blue circle, indicating that the sensor is ready for a reading. The user then blows on the sensor from a couple of inches away. If the sensor detects no alcohol, a green circle appears; if alcohol is present, the circle will turn into a flashing red steering wheel, along with the words “Don’t Drink and Drive.”  (The sensor can only detect the presence or absence of alcohol on a user’s breath; it can’t measure the amount.)

The alcohol sensor can be used multiple times; how many depends on whether people turn it off or leave it on between uses, says Roger Baran, a creative director with Goodby Silverstein & Partners, the Party Safe bag’s designer. That’s one reason the sensor was designed to be no-contact, so users wouldn’t have to put their mouths where someone else’s had been.

GS&P designed the Party Safe bag in conjunction with converter Colorbar, which developed the printing and technology and integrated it into the bag, says GS&P partner Sam Luchini.

“We had to figure out an entire different printing and assembling process for this design to work,” Luchini says. “From the thickness of the material, to the number of paint layers applied or the material used to seal the bags and the integration of the tech in the bag in a seamless way, we wanted to make sure that the bag looked like an ordinary bag of chips that turns into a somewhat magical experience when it’s on.”

They found that there were only a few printing machines capable of executing the project with the desired level of quality, and none were on the West Coast: “We had to travel to Wisconsin during a snowstorm to work with the printer to make sure the artwork printed properly. A big part of the learning curve was figuring out how to hide the message on the bag so that it would become visible only when the LEDs come on.” 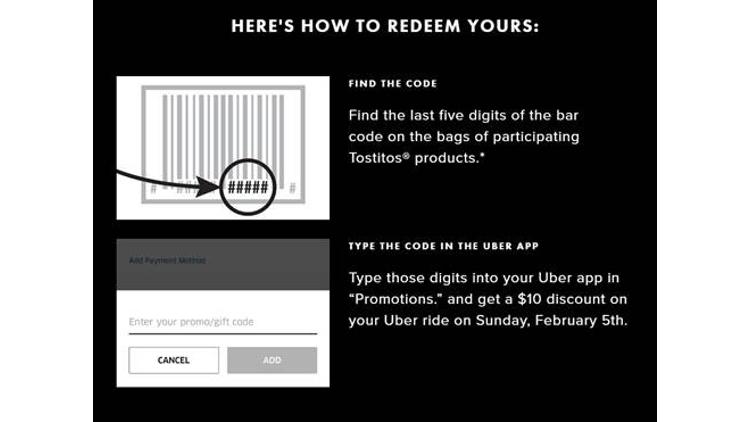 Regular retail bags of Tostitos will also contribute to the effort against drunken driving. On Feb. 5, the day of the game, the first 25,000 consumers who enter the UPC symbol on any Tostitos bag into the Uber app on their phones will receive a $10 discount on a ride.

Pan Demetrakakes began his trade publishing career in 1992 by covering packaging, which he has done for several publications over the years. Other areas of coverage in his career include the food supply chain from production through retailing, as well as specialty coffee retailing, gift and housewares retailing, and industrial coatings.