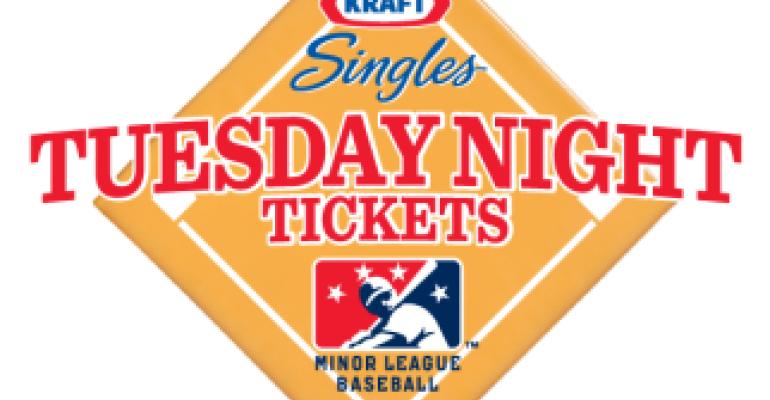 In Kraft Singles&#039; "Tuesday Night Tickets" promotion, available at most Minor League Baseball parks nationwide, fans who bring any Kraft Singles package wrapper to the ballpark box office on Tuesday nights and buy one ticket will get another 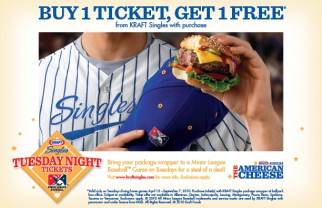 As part of Kraft Singles' ongoing commitment to providing value to consumers, families will enjoy huge savings on a classic summertime outing. To enjoy the savings and the fun, fans simply bring any Kraft Singles package wrapper to the ballpark box office on Tuesday nights, buy one ticket and get another ticket free courtesy of Kraft Singles.

The Tuesday Night Tickets deal is back by popular demand for its third season. Last year, the number of participating teams grew to 150 with a 43 percent increase in wrapper redemptions over the previous season.

"Thousands of families look forward to celebrating a baseball outing together where they can cheer on their local team and enjoy their favorite ballpark fare hot off the grill," says Marisa Zimmerman, senior associate brand manager for Kraft Singles. "The Tuesday Night Tickets deal is a homerun, bringing savings and smiles to Minor League Baseball fans and families across the country this season."

Wrappers redeemed through the Tuesday Night Tickets program will be upcycled as part of Kraft Foods' partnership with eco-innovator TerraCycle. TerraCycle works to turn donated wrappers into functional lifestyle products while furnishing a donation for each wrapper collected to charitable organizations.

The Tuesday Night Tickets promotion is being supported with a print advertisement in Food & Family Magazine, digital advertisements across multiple online channels, retail support in-store with specially-marked packages, as well as through in-stadium activities and giveaways for fans before, during and after the game.