As entrepreneurial ice-cream company turned national guilty pleasure Ben & Jerry's says regarding its stance on sustainability, “from cow to cone,” business decisions are based on a consideration of their environmental, social and economic impact. “We started years ago—before sustainability really even had a name—to establish a baseline for environmental programs,” relates Rob Michalak, director of social mission and “public elations ” for Waterbury, VT-based Ben & Jerry's. “Using this baseline, we looked at waste reduction and energy efficiencies, and we evaluated our company in terms of the supply chain and the materials we purchased—especially how those materials were handled and how we recycled, reused or otherwise disposed of them.”

It was not a hard sell, then, in the early 1990s, for startup business Rebox Corp. (www.rebox.com) to convince the environmentally conscious ice-cream company to sell its used corrugated cases to Rebox—a buyer and seller of used corrugated packaging materials located in Saint Laurent, QC. Recalls Michalak, “With the advent of Rebox, it was really and truly one of those win-win-win situations. For us, we were able to take a resource that, at that time we were recycling, and reuse it, and it also had a fiscal upside for us. For Rebox, it created a resource from which they could build a business.”

After establishing a steady source of corrugated from companies such as Ben & Jerry's, Rebox built a client base of companies eager to buy second-hand cases due to the financial savings they allowed. One such customer, bedding manufacturer Beco Industries of Anjou, QC, estimates that it currently saves from 15 to 40 percent in cost per case, depending upon the container size, by purchasing used corrugated from Rebox. “First of all,” says Karim Khoury, Beco's domestic purchase manager, “it's a cost savings. Second, Rebox is known for its reliability and for the quality of its cases.”

Rebox operates in Canada from a 100,000-sq-ft facility (90 percent of which is warehouse space), where it receives anywhere from five to 10 trailer loads per day of recycled and job-lot corrugated in hundreds of sizes for sorting and palletizing. Space, explains Jeffrey Zemel, vp of Rebox, is a big component of the business. “We keep a very large inventory of recycled corrugated cases so that we always have what the client wants,” he says. 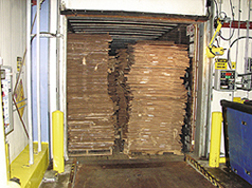 At Ben & Jerry’s, used, flattened cases are stacked on pallets, are stretch-wrapped and are moved into a trailer supplied by Rebox.

Still a major supplier to Rebox, Ben & Jerry's sells recycled corrugated to the company from its Waterbury facility, as well as from a newer manufacturing site in St. Albans, VT, which opened in 1995. According to Michalak, in 2006, the former plant provided Rebox with 225 tons of recycled corrugated, while the latter sold 468 tons. The cases are originally used to ship ice-cream ingredients, such as brownies, chocolate and walnuts, and Ben & Jerry's trademark pint packages and lids to its facilities.

While cases bearing ingredients arrive at Ben & Jerry's with some graphics and/or printing on them, the company negotiated a system some years back with its proprietary packaging supplier, whereby the cases that hold the pints and lids arrive blank. “That was actually another one of these scenarios that ended up benefiting all parties,” relates Michalak, “because the packaging supplier is able to save ink and labor on their cases, and Rebox is able to get clean cases at their end, which makes them easier to sell.”

Before it sold its corrugated cases to Rebox, Ben & Jerry's used to bale the used material, which was then purchased for a nominal price by a recycler. Rebox' Zemel relates that this is typical of the way in which many manufacturing companies dispose of their corrugated, but that it is a tedious and time-consuming process that is not free, either. Baling requires an operator to load the machine with corrugated and to remove the bales when finished. “We figure that the cost to bale is about thirty dollars per ton, if it is being done by a union operator,” he says. For plants that bale, selling their used cases to Rebox is a lucrative option: Rebox pays up to two times what recyclers do for the used material.

The process of preparing the corrugated for Rebox is simple, too, notes Michalak. After being unloaded, the cases are broken down, and any tape that had been used to seal them is removed. The flattened cases are then stacked on pallets until the stack reaches 3 to 5 ft high, at which time the pallet is stretch-wrapped and moved into a trailer supplied by Rebox. When the trailer is full Rebox removes the trailer, replacing it with an empty one.

At the Rebox plant, pallets are unloaded, and the contents are sorted according to size and weight. Zemel says that Rebox receives used cases from more than 100 suppliers in around 300 different sizes, ranging from 18312312 in. to 36324324 in. Rebox also purchases new cases that are obsolete or job lots from corrugate suppliers, in up to 1,000 different sizes, from 63636 in. to 48340340 in.

All of the cases are made from corrugated materials, in a range of strengths. And many times, notes Zemel, because the cases are originally specified to hold expensive packaging materials, they are stronger cases than his customers would usually buy if they purchased new.

While some corrugated arrives at Rebox blank, much of the material is printed with manufacturers' names and other information, but Zemel says that this is not usually an issue for customers buying used. “It's a niche market,” he says. “You have to find the right customer, the right situation and the right size case. It's really a bit of a juggling act. But, once we match the case to the client, it becomes easy. ordered a new case.”

Beco has been buying a majority of its corrugated containers from Rebox for the past 15 years. According to Khoury, Beco switched to recycled boxes when the U.S. and Canadian retailers it was supplying began demanding that they pack their range of bedding products in higher-quality and more expensive shipping cases. “Wal-Mart, for example, has very specific demands, and we couldn't afford to buy the cases they specified new,” he explains. “So we switched to used cases, and now we are saving a ton of money.” He adds that Beco's retail customers are satisfied with the bedding company's use of recycled cases, as long as they meet their size and strength requirements within a ±1-percent to 5-percent tolerance range. 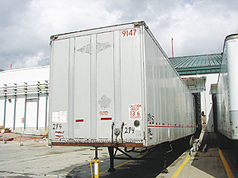 Rebox keeps a large inventory of hundreds of case sizes so that they are available when needed by the customer.

Rebox' reliability has also been a key benefit for Beco. Khoury says that before promising a retailer that he can supply them with a certain size and strength of case, he researches the availability of the case with Rebox to ensure there is a steady supply. “Rebox knows the case sizes that we need, and these are the sizes they look for,” he says. “They don't sell them to anyone else but us, and that is perfect. We can deal with small variants in case size, but we have to have a company that is steady and can guarantee us the supply of cases that we need.”

Khoury estimates that Beco spends between $2 million to $2.5 million per year on used corrugated from Rebox at a savings of 15 percent to 40 percent per case over new containers. And, he adds, the larger the case, the greater the savings, since more goods can be shipped per case.

While Zemel observes that many of the companies with which Rebox does business may be more attracted to the financial benefits of selling or buying recycled cases, he notes that there are significant environmental advantages to the program, as well. “Each ton of reusable corrugated containers eliminates the need to cut down and process seventeen trees,” he says. “Last year alone, Rebox was responsible for saving more than 500,000 trees.”