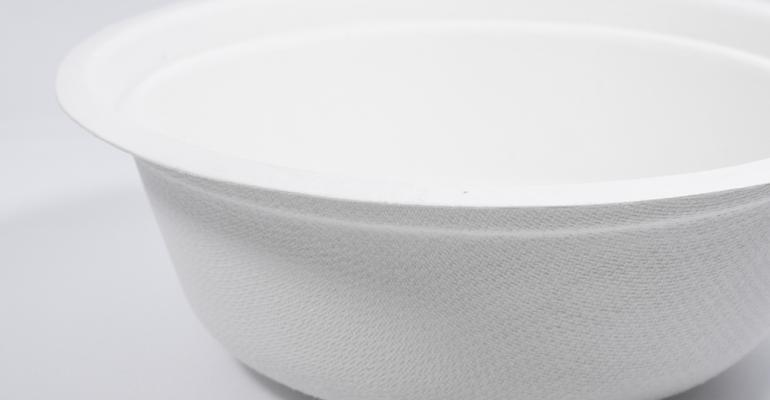 Activity in France around compostable packaging should help the industry grow globally.

Through a mandate for compostable serviceware and diversion goals for food waste, France has provided an important incubator for compostable packaging innovation and a captive audience to purchase the product.

France entered into a tier of green legislation all its own this September. The country outlawed all conventional plastic cups, cutlery and plates, mandating the use of home compostable alternatives. President François Hollande explains that the ban on disposable plastic serviceware is part of a larger strategy to frame France as “an exemplary nation in terms of reducing greenhouse gas emissions, diversifying its energy model and increasing the deployment of renewable energy resources.”

Indeed, the ban arrives in the wake of the progressive Energy Transition for Green Growth Act passed last year. With 215 sweeping articles touching most areas of energy and resource use, the omnibus package poises the plastic serviceware ban as one of France’s many “future-fitting” efforts for a post-petroleum world.

Hollande’s administration has an understandable desire to make significant and visible changes to its packaging waste management strategies. In 2015, the French consumer watchdog group UFC-Que Choisir reported that only 23% of French municipal waste is recycled. This is a far cry from the European Union’s goal of 50% of waste being recycled by 2020 and 70% by 2030. UFC-Que Choisir president Alain Bazot laments that the situation cannot get any worse, and that, while consumers need to step up to the plate, “the tools are notoriously insufficient.”

Bazot’s critique expertly reflects the problem of consumer comprehension of recycling, or lack thereof, both in France and abroad. Ambitious waste reduction goals like the EU’s will require forceful efforts to drive consumer action to improve recycling rates.

A survey conducted by the French firms Eco-Emballage and OpinionWay illuminates that one of the largest opportunities to impact change lies in a standardized labeling system and improved consumer communication on package. The survey results underscored confusion between France’s recycling symbol and the EU’s Green Dot symbol, which conveys that a manufacturer has financially contributed to recycling and recovery: 59% of individuals misidentified the symbols.

Potential for continued or increased confusion once compostables are introduced broadly in 2020 is all but assured unless steps are taken to better inform consumers on correct recycling or composting action.

How2Recycle and its new twin How2Compost may provide the needed clarity to catalyze correct recycling action from the current 23% to include composting and meet the EU goal of 50% by 2020, especially once more diverse packaging is ubiquitous. In fact, How2Recycle has recently launched French language labels now on shelves in Canada. Expanding to France and other francophone countries would be a natural extension.

Moving forward, the requirement of single-use serviceware to be home compostable will alter the packaging waste landscape in a way yet to be examined on a national scale. Not only will the serviceware transition remove a significant amount of product from the traditional plastics recycling stream, but it will necessitate exponential growth in France’s composting infrastructure to avoid the compostable serviceware being landfilled.

Likewise, compostable packaging manufacturers will be tasked with meeting dramatically increased demand. France uses 4.73 billion single-use plastic cups alone, of which only 1% is currently recycled. During this transition period, many consumers and retailers may switch to reusables in lieu of compostable disposables. However, even in aggressive scenarios of reusable serviceware adoption, the home compostable serviceware market will have demand for many billions more units than today.

Compostable resin demand as a whole has already began to increase. With France’s mandate for home compostable produce bags going into effect soon on Jan. 1, 2017, innovation and growth around bioplastics has been stoked.

For one, the Italian firm Novamont has already revitalized five decommissioned plants and has partnered with the Barbier Group, France’s largest plastic film manufacturer, to develop improved home-compostable film. Novamont’s Mater-Bi material stands with cohorts like BASF’s Ecovio, Metabolix’s Mirel and FKuR’s Bio-Flex that are already OK Compost certified as home compostable and may be ready to accommodate the increasing demand as we near 2020.

Speaking on behalf of many in this space, European Bioplastics chairman François de Bie has stated that, “We fully support the clear commitment to plastics which are biobased and biodegradable.”

Despite the ban on plastic disposable serviceware receiving a warm welcome from many, the upheaval has not been free of critics. Industry association Pack2Go Europe has certainly been the most vocal opponent of Hollande’s recent legislation. Pack2Go president Mike Turner has claimed that, “France is flying in the face of the EU’s free movement of goods rules,” and the “action is totally out of proportion to the environmental risk that disposable plastics tableware represents in reality.” The group’s cecretary general Eammon Bates has underscored that Pack2Go is, “urging the European Commission to do the right thing and to take legal action against France for infringing European law,” and that, “If they don’t, we will.”

Others don’t question the plastic serviceware ban for free trade concerns, but due to the worry that it would affect financially insecure families that rely on single-use plastic tableware more often than other demographics. Ségolène Royal herself, minister of Ecology, Sustainable Development and Energy in France, initially opposed the disposable serviceware ban for this reason, causing the delay of the legislation’s start date until 2020 instead of 2017. Rest assured, Royal has since come around.

Together, Royal and Hollande have forged a clearer path to sustainable materials management than have most administrations. After hosting COP21 in Paris last year, the environmental leaders have arguably facilitated the most decisive changes towards meeting resource-related United Nations Sustainable Development Goals of any member nation. And the disposable packaging mandate is no small piece of meeting the Sustainable Development Goals for Responsible Consumption and Production or Climate Action.

Decidedly, Hollande’s administration has highlighted that “Preventing the production of waste, and more precisely waste from products manufactured from non-renewable materials, is one of the French government’s priorities.” Moreover, “the legislator’s decision…is entirely compatible with development of the circular economy,” which remains a keystone of France’s broader energy and environmental strategies.

In much the same way, France has made bold commitments to foster food waste diversion and organics recycling independent of packaging. Regarding upstream food waste diversion, in February 2016, France unanimously passed a mandate for large grocery stores to donate all unexpired food.

In terms of downstream diversion, a 2015 bill establishes the goal of providing a pay-by-weight organics disposal system for 15 million residents by 2020 and a universal system of separate residential and commercial organics collection by 2025. With food waste as a primary generator of methane—a greenhouse gas 21 times as potent as carbon dioxide—this is an excellent tactic to meet France’s 2030 greenhouse gas reduction goal of 40% from its 1990 baseline.

Given the rapid adoption of plastic bag bans in recent years, only time will tell whether bans on plastic serviceware will follow the same trajectory. But whether or not France’s mandate diffuses across Europe and beyond, France alone has provided an important incubator for compostable packaging innovation to take place and a captive audience to purchase the product.

In its wake, one can hope that this will be a model for how localities and countries can stimulate composting infrastructure to expand access for the composting of organics, uncoated paper and packaging alike. 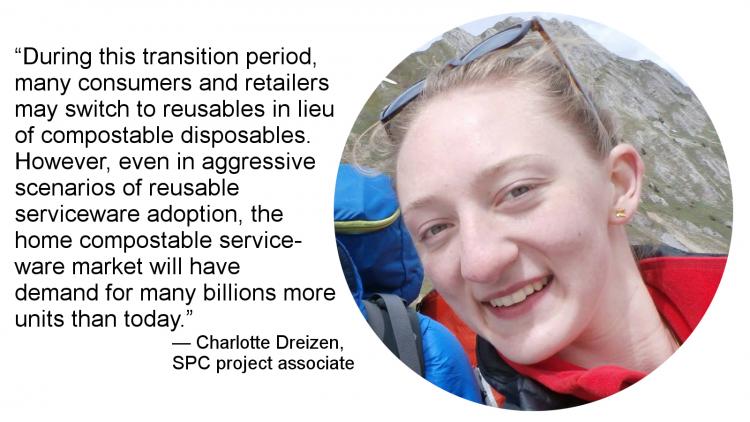 Charlotte Dreizen, now a project associate for the Sustainable Packaging Coalition, joined GreenBlue as an intern in March 2016, focusing on the development of compost-related programs. Assisting with the creation of the Sustainable Composting Collaborative and research efforts to quantify the value of compostable packaging, she contributes experience from leading food waste research efforts, as well as supporting residential and higher-ed composting programs.