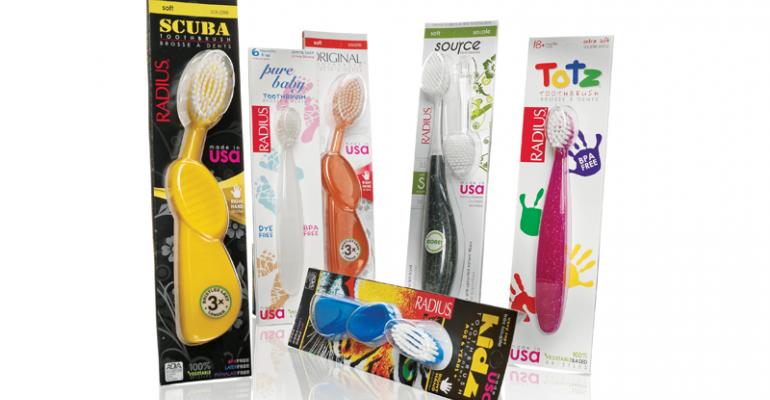 The idea came about on the beaches of the Caribbean island of Tortola by architects Kevin Foley and James O’Halloran. Why not reinvent a personal care tool used every day by billions of people around the world—the toothbrush! Hence the inception of Radius, a family-owned, women-run and operated company manufacturing in a 20,000-sq-ft restored feed mill built in the early 1800’s in Pennsylvania Amish country. O’Halloran has since retired and Saskia Foley, Kevin’s daughter took over the reins at Radius in 2011, but she had long been involved in the company where she spent summers in assembly and spent several years as vp of sales and marketing. Her father remains with Radius as president and a research and design consultant.

The company designs and manufactures its products in-house on energy-sufficient, solar-powered machines in Kutztown, PA, where each product is inspected by hand, designed to last and unconditionally guaranteed.

Its revolutionary ergonomic toothbrush construction has a resounding 5,500 thin nylon bristles (about two-thirds the thickness of an Oral B 40 and four times more bristles) and is offered in right- and left-handed styles. The body of the toothbrush is made of cellulose, and the head is a large oval shape to lower pressure on the gums. The concept of actually developing a handle that responds to the right and left orientation was atypical to the dental community, according to the company, and its design didn’t fit into the little slots toothbrushes that are sold from or are inserted in at home. Despite being the new kid on the block, the design took off and, even though other toothbrush brands tried to replicate the concept, they haven’t come close.

Packaging evolution
Radius started in 1983 with a simple paperboard folding carton, but soon learned that customers ripped open the box to see the color and shape of the toothbrush inside. They quickly progressed to clear plastic folding boxes—no opened boxes—but the carton became plastic trash, once opened.

In 1992, the company started making plastic cartons that served as packaging to sell and ship in, and doubled as a container to house the toothbrush on trips or protect it in the bathroom. These containers had a long and useful life before being recycled. However, many customers complained about having multiple Radius travel cases, picked up over the years. The plastic box, although recyclable, was also heavy and consumed a lot of fuel in shipping.

In 2005, Radius started exploring lighter packaging alternatives and the prospect of plant-based plastics. The amount of freight used in distribution of its products represents a major part of its energy use profile. This led to the decision to change to a new type of package—a mock clamshell. The clear plastic front is lightweight and the card can be made from recycled materials.

Previously, Radius implemented a transparent thermoforming film as the blister portion of a carded blister-pack that was made from 50% recycled PET bottles. This was the packaging for everything from the kids’ toothbrush line to the adult toothbrushes: Original, Scuba and Source. At the time the company didn’t have the Baby and the Totz line, the latter of which is now its biggest seller.

“While this was fine, we sell largely to the natural products industry. So it was just too much plastic,” says Saskia Foley, CEO. “We loved the idea behind the packaging but we needed the eco-plastic, kind of the mixed recycled plastic from soda bottles. We were looking for a vendor that would offer us recycled PET blisters but without having to have this custom mold and have this overly plastic look.”

Foley adds, “This caused us to reinvent the wheel. Kevin ended up starting the search on how to make it less plastic for our specific shape. Most people have such a standard-shaped toothbrush that it wasn’t hard [for them]. But we really wanted to call out our shape without so much plastic. What we ended up with was what you call a boxed blister.”

A “boxed” blister is a variation on a trapped blister. Instead of trapping the blister between two separate heat-sealed cards, a boxed blister is where the filled blister slides into a paperboard sleeve. Tabs on the back of the sleeve are then pressed down and hold the blister in place.

With a recent switch to a new supplier for the sleeves—its existing blister supplier Transparent Container—Radius was able to automate this closing/sealing step. The tabs are now pressed and sealed on a rotary heat sealing system. See a video of the operation at pdlinks.com/Radius.

The change in suppliers solved a couple issues. The way the package is designed creates a third dimension on both sides, just at the edges (see the photo of the back of the blister on the oppositive page at the bottom left). This helps the packages stand up in the company’s merchandising cassette for retail display. It also adds another “side” for more marketing messages. The company prints its website address, tag line “the natural choice for the natural smile” and the type of toothbrush (“original right” for example) on the package’s side.

The previous supplier was not able to pre-break the sleeves, so Radius had to hand break them when they arrived, an extra operation that was laborious since there are three folds on each side for a total of six per package. Switching to Transparent Container eliminated this for Radius.

“That was really the crux of everything—to go out and find someone who could actually make the process easier and not have this three-fold process,” Foley says.

‘Single’ solution
“Most vendors can only offer one [piece] and then you have to go to a separate vendor for the other,” Foley explains. “What ends up happening is you’re constantly having different cycle times and ordering quantities at different times, trying to match them. Transparent Container was a really great partner because they allowed us to do both in one house.  They were able to be our card manufacturer as well as our existing blister manufacturer.”

The benefits of a single supplier extend through the supply chain. “The more we can streamline and have consistency in vendors—and one vendor that supplies as much as possible—the better it is for us,” Foley explains. “Because we know we have a trusted relationship. And that’s going to always create consistency at the shelf so the consumer is seeing a beautifully made, sealed, consistent product that looks quality...the colors always matching.”

The company’s product line has expanded from its original sleekly designed toothbrush with interchangeable heads and now includes floss and travel cases.

Also, this summer, Martha Stewart Living selected Radius as a 2014 finalist in the style, beauty category in its 2014 Made in America competition. More than 900 companies were named in four categories.