The purpose of a distribution or transportation simulation test is to evaluate the performance of the complete packaging system. However, such testing is a conditioning element, as there is no specific or variable result derived from these tests. It simply subjects the test specimen to dynamic hazards (e.g., shock, vibration, or compression) inherent to the transport and distribution of products to the end-user.

The testing performed on the interior packaging after the ‘conditioning’ identifies whether the package system passes or fails. The pass-fail criterion (e.g., package leakage, loss of sterility, product breakage, etc.) for the package system design performance validation must be established prior to testing.

Many medical device manufacturers (MDMs) struggle with the development of a packaging system design qualification test plan for compliance to ISO 11607:2006, Part 1. One challenge is to determine which procedure to specify for performance testing. There are several distribution simulation test methods that can be used for package performance testing.

Recent revisions in the standards have created challenges for MDMs in determining the best approach for complying with package testing regulations. ISO 11607:2006, Part 1, requires that sterile medical device package systems be capable of withstanding the transportation and distribution environment. This is typically accomplished by performing a package performance test protocol consisting of a series of laboratory tests that simulate the dynamic and environmental hazards associated with the distribution of products to their end use.

Annex B of Part 1 in the ISO 11607:2006 standard recommends the use of the ASTM and ISTA standards for simulating these hazards in the laboratory. There are a couple of issues to consider when determining which standard to use for compliance purposes. The first is whether the test method is recognized as a consensus standard by FDA. The second is whether the test intensity of the procedures simulating the environment in which the packages will be transported is realistic.

ASTM standards are consensus standards because a large group of experts develop and democratically approve the documents for publication. A strict voting regimen is imposed on the standard. All issues, concerns, and comments must be addressed before final approval as an ASTM standard.

The internationally recognized ASTM D4169 standard has gone through this process. Conversely, the ISTA standards are developed by a private association and are not considered consensus standards by FDA, as they are developed by a small group of technical members. This is important from a regulatory compliance standpoint because FDA reviews consensus standards and periodically adds standards to the approved list of recognized standards. The recognized standards are cataloged in the “Recognition and Use of Consensus Standards,” which is an FDA guidance for industry and staff. These are test standards that can be used to provide evidence of product efficacy as well as compliance to vertical standards such as ISO 11607 in the case of package systems.

Information submitted regarding conformance with such standards should have a direct bearing on safety and effectiveness determinations made during the review of IDEs, HDEs, PMAs, and PDPs. The guidance further indicates that “if any premarket submission contains a declaration of conformity to the recognized consensus standards, this declaration should, in many cases, eliminate the need to review the actual test data for those aspects of the device addressed by the standard.”

There is discussion within the medical device industry regarding distribution simulation standards for compliance with the ISO 11607:2006 standard. There are four distribution simulation test methods available for use in complying with the ISO 11607:2006 standard. Other tests could be used at the MDM’s discretion, but rationale and justification may be required to satisfy the FDA requirements for applicability of the methods used. The four tests are listed below: 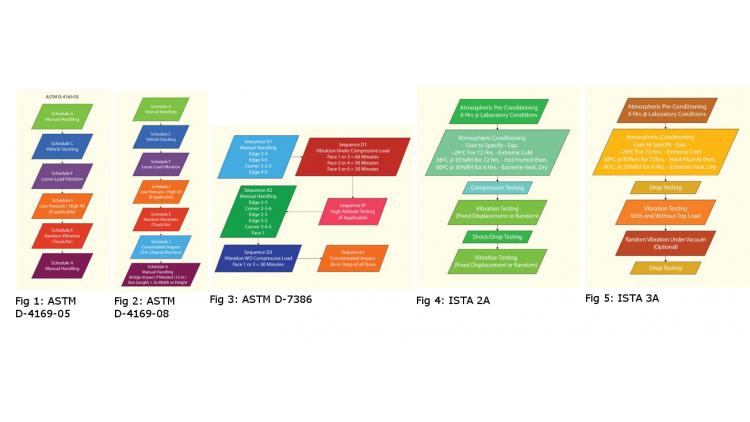 ASTM D4169-05 is currently an FDA-recognized standard. The typical test protocol for medical device package testing is the distribution cycle 13 (i.e., DC 13). The test intensity level most commonly performed is assurance level 1 because terminally sterilized medical devices are high-value products for invasive and minimally invasive human use. These products must reach the end-user safely and reliably to ensure patient safety and device efficacy. The risk of a breach in package integrity or a product that presents an unsafe condition to the user or patient is a high-level risk to be eliminated or mitigated.

The final risk level is determined by the MDM. The determination of the risk level could result in the MDM’s performing a test at a lower assurance level of 2. Risk level is the responsibility of the MDM to justify and rationalize.

The ASTM D4169 standard has been used extensively in the medical device industry for FDA compliance. The deployment of ASTM D4169-05 as a representative laboratory simulation for the distribution environment has a solid history of releasing high-performing package designs into commerce, as well as identifying potential failures and hazards. Laboratory simulation tests should be evaluated and modified periodically to incorporate best demonstrated practices as well as reflect the latest environmental data that a team of technical experts agrees is appropriate. This results in continuous improvement for testing standards. The method consists of the test procedures shown in the flow chart above.

It should be mentioned here that the newly revised D4169-08 standard has not been recognized by FDA as of this writing. ASTM D4169-08 may eventually be approved by FDA as a recognized consensus standard. The difference in this standard from the D4169-05 versions is that several changes in the DC 13 test regimen were incorporated as follows:

• The bridge impact test has been added to the test sequence for long packages.

• The concentrated impact test has been added for shipping containers of 275 # test and lower.

These changes do not significantly impact the outcome of a test on medical devices.

When using the ASTM distribution cycles, there are limited options to choose from that will alter the test protocol from lab to lab. This results in relative test protocol standardization, which may reduce interlaboratory variation.

This method is comparable to ASTM D4169-05; however, it is the authors’ opinions that there is wide latitude in the selection of test procedure options for shock, vibration, and compression test procedures. The result is a test method that is not really a standard, potentially resulting in interlaboratory differences when performing ISTA 2A.

The ISTA 3A is a general simulation performance test method and is significantly more severe for medical device packages than the D4169 standards.

The increased severity to packages is mostly a function of the simultaneous top loading of the test package while it is undergoing vibration testing. This contrasts with the ASTM D4169 standards, which do not require the simultaneous inputs of top-load compression and dynamic vibration. The compression load calculated from the equations in the standard results in top loads that may cause uncharacteristically severe crushing damage during vibration tests. Our anecdotal evidence from our medical device testing clients is that this compressive damage is not experienced with their commercial shipments.

ASTM has published a new test standard that includes a package top-loading requirement, ASTM D7386-08. Generally speaking, some level of top loading may be a realistic phenomenon for most packages moving through the single parcel environment. Product and package design can mitigate top-loading failures experienced in the test laboratory and real-world distribution and storage environments. It is recommended that an initial evaluation of the sterile barrier system package design be made for an assessment of top-loading failure.

The package design’s robustness may be improved with simple design changes, such as reorientation of the internal components or the addition of support inserts or pads or a central special slotted container (CSSC) or a full overlap (FOL) corrugated shipper. To be noted, if a manufacturer has no history with their sterile barrier system package design relative to top loading failure, then this phenomenon can be rationalized as a low-risk level and conclude that no risk mitigation is required.

When selecting a distribution simulation test method for compliance to ISO 11607:2006, Part 1, for package design  performance testing, the following salient points should be considered:

1. A review of the currently active and approved distribution simulation test methods should be made by the responsible individuals for determination of the most appropriate representation of your actual distribution and storage environment.

2. Based on the risk level assigned to general packaging system failure, select the most appropriate assurance level and hazards to be performed.

3. Based on the risk level assigned to top-load compressive failure of the shipper, select the representative test method for performance of this hazard.

4. The manufacturer should evaluate the benefits of deploying an FDA consensus standard for the purpose of regulatory compliance.

1. FDA, Guidance for Industry and Staff, Recognition and Use of Consensus Standards, September 17, 2007, www.fda.gov/cdrh/osel/guidance/321.pdf