For information on form/fill/seal equipment, there may be no better source than the package engineering staff at W. E. Bassett Co., in Shelton, CT. With a battery of these machines in their plant, the staffers found themselves faced with an exploding demand for the 1,200-some stockkeeping units of personal care implements that earn the 63-year-old company a 47-percent share of its market.

With one of the older machines displaying severe transfer and feed problems, staff members traveled to Pack Expo 2000, seriously seeking a replacement. The machine they found, now customized and integrated into a smoothly running packaging line fully operational for the last eight months, not only allowed mothballing of the previous unit but also boosts per-shift output from 38,000 to 55,000 blister-cards, with 60,000 a definite possibility, PD learned during a visit several weeks ago. 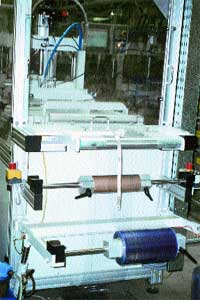 "We had a fairly clear idea of what we needed when we went to Chicago," recalls Bassett plant manager Richard M. van Fleet, who scoured the exhibits together with production supervisor Dave Molnar. "We just didn't realize it already existed and could be modified to meet or exceed our criteria."

The exhibitor they visited was Action Packaging Automation; the machine is the Koch KBS-PL in-line linear f/f/s blister packager. It proves to be a simple, tough machine with the capacity for high output for the required two-shift day in what are often six-day weeks.

Fully integrated
The machine is fully integrated into a semi-dedicated line that blends human and mechanical capabilities to provide unit carded blisters containing fingernail and toenail clippers marketed under the Trim® tradename. The line is also packaged to sell by Target, Wal-Mart, CVS, Rite Aid, Walgreens, Kroger and other chains. During the PD stay, fingernail clippers were packaged for sale under Bassett's Trim name.

Working from a single 10.3-in.-W roll of transparent 7-mil vinyl sheet made by Klöckner Pentaplast, infeed rollers of the Koch machine guide the film into the positive-forming die station. Teaming heat with 8-cavity molds, the machine forms the blisters,immediately slits them in the linear direction and then cross-cuts them. The molds for the Bassett machine are made by Koch using 3-D design software, which generates an exact model which the customer approves prior to the molds being made. The molds are then made in Germany where the machine is manufactured, and the customer does an onsite production test using the molds in the factory in Germany.

The trays then move down to conveyor pallet trays, each nested in matching cavities for correct positioning. Next, gripping fingers index the trays onto a powered conveyor for manual loading of the fingernail clippers, each identified by a pressure-sensitive label printed with a bar code. Three workers load in the clippers from wooden trays.

Assuring the trays remain in perfect orientation during filling are sets of control pins, while the variable-speed conveyor is realistically timed to the workers' optimal pace. Similarly, control pins position the magazine-loaded cards into the sealing station. What is fascinating is the transfer technique. "The vacuum pick-and-place pulls cards from the bottom of the vertical magazine, which is far more efficient than the forty-five-degree angle movement of competing machines," PD is informed by Action Packaging sales manager John Wojnicki.

This is the critical juncture in the packaging process, where often incorrect positioning harms the sealing form. With the Koch machine, the hydraulic sealing system presses the heated die against the back of the C1S card, effecting the seal. The precisely aligned seal is made metal-to-card-to-metal, so it doesn't require glass cloth or silicone pads, reducing maintenance costs and obviating quality control problems.

The card being used for the Trim fingernail clipper package is produced by Jay Packaging Group using a .020 C1S SBS, offset-printed in four colors on a 40-in. Heidelberg press and die-cut with a butterfly cutout for hanging display. It measures approximately 25/16 x 61/2 in. The card's rear, printed in one color, highlights the clipper features, followed by a satisfaction guarantee and bar code. Product packaged during PD's visit is sold two for $1, communicated by a front-panel spoiler.

A major advantage of the machine/materials design innovation is the frugal use of the vinyl. There is absolutely no trim waste, as the machine cycles eight-across at its 18/min rate, with each blister measuring about 11/4 x 51/2 in. Richard van Fleet is especially pleased with this. He says, "The extra effort and time needed to collect and dispose of this material can add up quickly when you consider the sheer volume we use in our operation."

Following sealing, the machine's discharge system gently picks up the finished packages and deposits them at the next station. The Bassett-built equipment starts with a powered conveyor from Endura-veyor running off a variable-speed stepper motor from KB Electronics. At this station, two workers accumulate 12-card groupings and place them into side-loading cartons produced by Curtis Packaging of .020 full-bending chipboard.

Getting an identity
The cartons are placed on end and fed into a powered Smart Move Series 4000 flat-chain belt conveyor, acquired through Indoff, for phasing under the MaxRes printhead of the Eagle jet coder from Leader Co., acquired through Hill Packaging. This is run off an Allen-Bradley programmable logic controller. The coded cartons move less than two feet downstream for sensing by Banner photoelectric eyes, which activate a Bimba thruster that nudges them onto a Bassett-made accumulating conveyor moving four-carton groupings practically into the hands of a worker who loads them into master shippers.

These are RSC cases produced of 29 ECT C-flute by K&H Container, part of Unicorn Packaging Group. The cases are manually closed and taped, and placed on pallets set at a comfortable height by jacks. They're identified with p-s labels generated by a DataSouth CodeWriter Model 5106.

Even with the new equipment, van Fleet acknowledges the high level of manual involvement. "With the old machine, we needed six people to keep it going at an acceptable rate," he recalls. "Now we have seven. That is no problem, since we want them to inspect for any problems that might arise and correct them before they reach our customers."

Satisfaction with the line's current status is echoed by Molnar. He tells PD, "We're now able to run a seven-hour-and-fifty-eight-minute shift twice a day. The only downtime comes with a change in the cards, or when we switch to toenail clippers. That's the single factor that stands in the way of the 60,000-package-a-shift level."

Adds van Fleet, "We project a payback on the new machine at eighteen months, even with the additional person needed on the line. And we're also evaluating with Action Packaging Automation a second machine to handle some additional products."

Significant candidates now packaged on other equipment include a large variety of Trim tweezers, emery and salon boards, nail files and cuticle pushers/removers. Meanwhile, odd-shaped and lower-volume products such as callus removers, nail brushes, pumice stones and eyelash curlers are packaged by a pair of Alloyd rotary blister machines and a larger f/f/s machine of a type no longer made.

"That's the one the second Koch machine would replace," van Fleet predicts, "and that should take us into the future efficiently and securely."