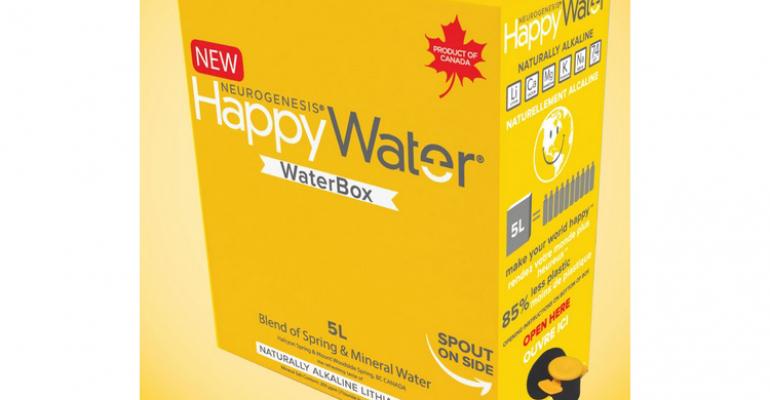 Value-priced WaterBox BIB packaging is expanding into the U.S.

The bag-in-box WaterBox that makes packaged water affordable in a sustainable format in two sizes is poised for bigger things, including entry into the U.S.

Leading Brands, Inc., Vancouver, Canada, has filed patent applications in both the United States and Canada to protect its new WaterBox that uses 85% less plastic than conventional bottled water.

The company launched the WaterBox in Canada in September 2014 in 5- and 10-liter bag-in-box packaging under the brand Neurogenesis HappyWater, a formulation of naturally alkaline Canadian lithia water. It is available in major grocery retailers across Canada for $7.99 for 5L and $11.99 for 10L.

McRae says it is particularly targeted toward consumers interested in convenience and protecting the environment.

The introduction presented several challenges, including developing a recyclable “cardboard box” that  would survive in all environmental conditions, according to McRae. That includes making the WaterBox freezable to keep water cold over a weekend for camping, boating and other occasions.

He also notes that wasn’t the biggest challenge.

“As with any revolutionary new packaging, that’s having consumers understand what they’re seeing at first glance,” McRae reponds. That’s done through the packaging, which feature bright yellow graphics. The design was done in-house with the intent to quickly convey the benefits of the packaging format from both a convenience and environmental perspective, he says. Side panel copy makes a visual case for the fact that the 5L size replaces 10 bottles of water. The water is dispensed through a pour spout on the side.

McRae credits Smurfit Kappa for the bag and pour-spout fitment—in a yellow color—and Alliance Packaging for the  box.

The water is packaged for a two-year shelf life using what McRae describes as “a specific machine located in a joint-venture bottling facility.” 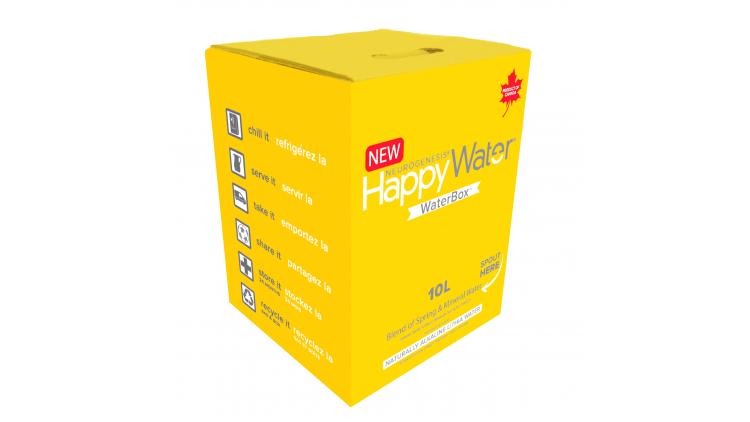 The larger 10-L WaterBox will be joined by a 15-L version that targets home and office delivery.

There’s more challenges in the works, though they are also ones the company embraces.

“We will shortly launch an even larger sized WaterBox to directly compete against home and office water delivery,” says McRae, telling Packaging Digest that’s looking to be a 15L size introduced in both HappyWater and a “more simple” spring water version, he adds.

In another development, the WaterBox will make its U.S. debut this fall with what McRae describes as “a major, high-end retailer.”