Captain Morgan bottle is a blast 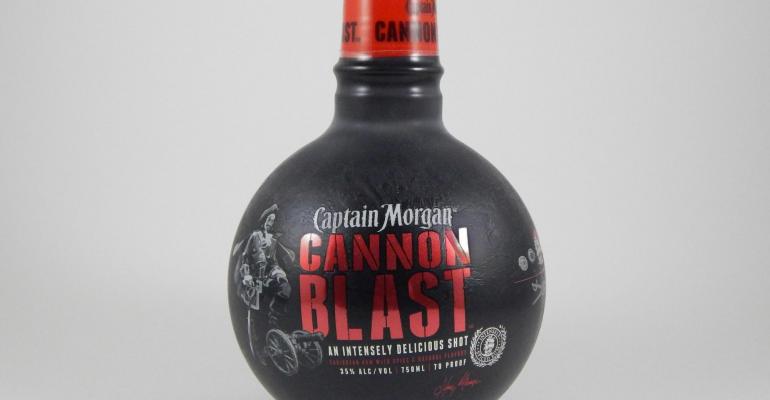 Taking the Cannon Blast bottle for a spin reveals a treasure chest of packaging details.

The Cannon Blast specialty rum bottle packs a powerful packaging punch at retail with an impressive list of “how did they do that?” attention to detail. We take it for a 360 degree spin that reveals its treasures.

A round bottle in a liquor store is startlingly different, which explains my reaction to seeing Captain Morgan’s Cannon Blast bottle in a retail display for the first time: It literally stopped me in my tracks.

And it took all of a second to get what this packaging was about: The 750mL bottle is a sphere that is decorated to resemble an authentic cannonball to the nth degree.

I’m probably not alone in taking a long look at bottled packaging that breaks through a sea of different-but-same cylindrical bottles in assorted shapes, sizes and colors.

I purchased the bottle and later reached out to the brand owner, Diageo, for official input, but the response was “While we appreciate your interest in our product, it is our policy not to provide proprietary information to external parties for private or commercial purposes.”

It seems the brand owner guards its secrets well so we must rely on that old reliable standby, personal examination.

It starts with the spheroid glass bottle, which is wrapped in a shrink film. Ironically, I will refer to this loosely as a shrink film only because I don’t know how they did it: The printed film adheres very tightly around the bottle with nary a wrinkle. Most of us in packaging can appreciate what went into getting that skin-tight fit on a sphere, which alone is pretty amazing.

But there’s more easy-found treasure in store: The jet-black shrink film has a matte finish and is textured to give it the rough surface of an authentic period cannon ball.

The bottle “front” has red Cannon Blast lettering that’s mirror shiny, and I mean that literally: I can see myself and some details of my surrounding reflected in the lettering. Beneath that is the playful tagline, “an intensely delicious shot.”

To the left is the familiar captain, with a leg up on a small cannon instead of the usual rum keg. This captain wears a shiny coat, so to speak, but that’s due to something I’ll reveal as a final surprise at the end of the article. 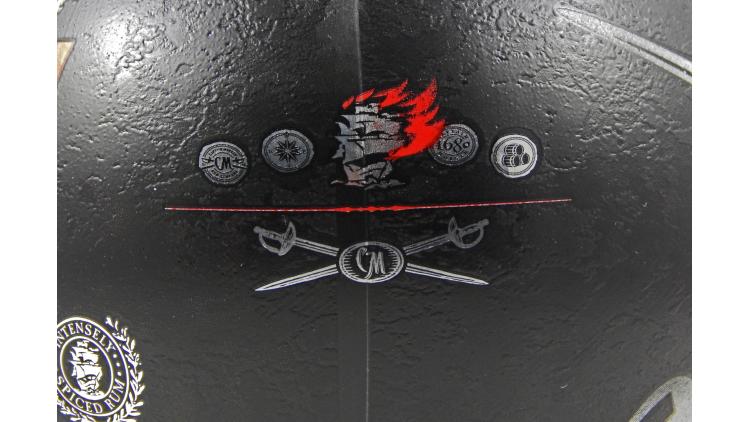 As we take the bottle for a literal and figurative spin clockwise we come across a small smattering of four reflective silver emblems grouped on either side of a burning ship. Below the fiery ship are a pair of crossed swords with the CM (Captain Morgan) logo at the center.

With another partial turn we come across a large, hatted, grinning-pirate-skull with crossed swords. The hat also has the omnipresent CM lettering. 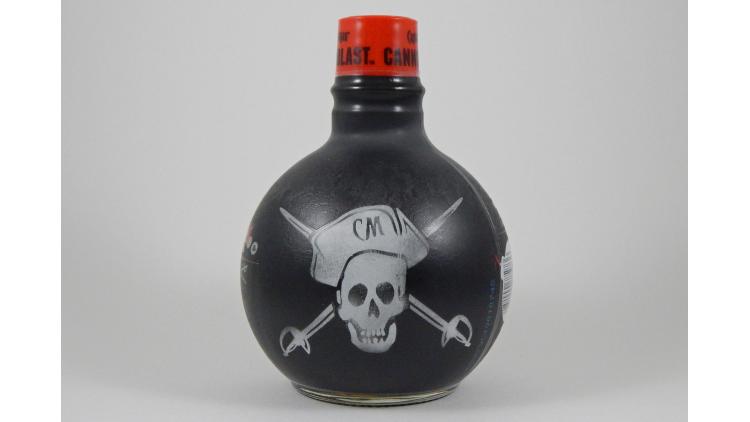 Next: A UPC bombshell and 2 final surprises 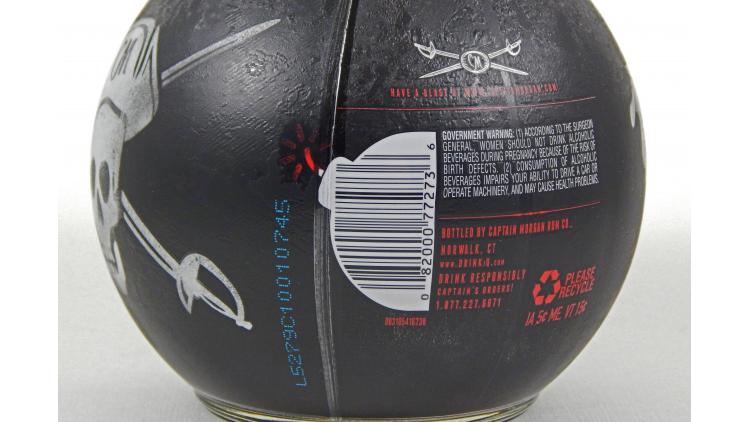 Next clockwise is the required legal and branding information printed in either white, red or black in the case of the UPC. The UPC code is not only positioned vertically, but it’s in the shape of cannon ball and has a red-printed lit fuse. How cool is that?

Another detail is that the UPC “bomb” portion is a gloss white to improve scannability.

Also, the vertical seam in the shrink film falls in that same area, in fact it lands right across the top of the “bomb.” However, there’s absolutely no gap or overlap of the printed bomb or the shrink film at that point. That is some remarkably tight kind of registration.

Guarding the top of the bottle is a tamper-evident polypropylene closure that is, fittingly, red in color to mimic a blast cap. The closure from Berry Plastics is embossed with the CM logo on the top and has black-ink-printed branding around the circumference.

The bottle has a wide stable base. Would it surprise anyone if I note that the glass bottle vendor appropriately molded on the bottom is Anchor Glass? Whether that choice was intentional or sheer happenstance, it is just so yo-ho-ho amusing to me.

I promised a grand finale and here it is as the bottle gives up one final secret: A web search uncovered this added bonus—that I would not have discovered on my own—from the blog of the Rum Howler: “The Captain Morgan image changes if you place it under a black light. Under the influence of the ultra-violet light the Captain sheds his skin so to speak, and we see his skeleton grinning wickedly at us.” 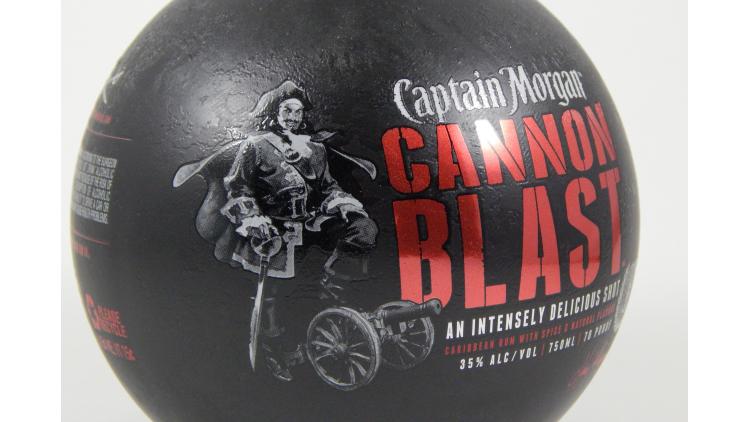 Another wow—and with it the captain gets the final laugh. We’ve now come literally full circle with one of the most impressive bottles I’ve ever seen.

If you come across a package you feel is also a remarkable one, let us know! We’ll credit you for the find if you don’t mind, just email me a few bits of information at [email protected] with the subject line of Cool Packaging.