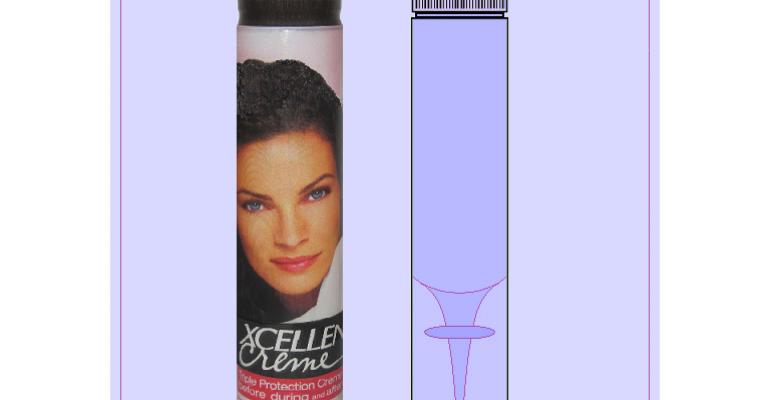 No-mess tube concept for haircolor and other products.

Do-it-yourself hair coloring gets a packaging makeover that makes it a whole lot less messy and a whole lot more safe and convenient. The concept is also applicable to two-part mixes for oxygen-sensitive components.

For those of us not in the know, hair coloring is a mysterious, rather inconvenient and potentially inexact process that involves strong smelly chemicals.

It turns out that even to those in the know it’s all of that and more.

To designer-inventor Aron James Clarkson, CEO of StarOne Group, it also represents an opportunity to revolutionize the DIY hair-care market through packaging-driven ingenuity.

As with many ideas, it starts with a problem.

“The problem is with hair coloring is that the actual hair colorant paste is very sensitive to oxygen, which is why it’s packaged in aluminum tubes,” explains Aron James.  “The other part of it is an activator that has to be kept separate until the point of use that’s usually contained in a plastic bottle.”

Aron James points out that less expensive brands use peroxide as the activator, which can burn the scalp if not mixed and applied properly. Also, the fact many users don’t use the whole bottle and so their on-the-fly mixing proportions and amounts can be inaccurate to further compound that unfortunate potential side effect, according to Aron.

Those two components are typically sold together in a single paperboard carton. He proposes a patentable package design that can fix all that inconvenience by using a 2-compartment system —one compartment in an aluminum tube for the hair colorant paste and the other for the activator—that’s contained inside an injection molded, squeezable plastic tube.

How it works is that the base is rotated 360 degrees several times, causing a nozzle in the base to pierce through the compartment wall and inject the hair color paste into the liquid activator. The two components continue to mix as the base is turned.

The container is shaken before use to finalize the mixing. The precisely predosed product can then be applied directly to the hair by squeezing the flexible container forcing the colorant out through the nozzle.

“It’s so easy to do and absolutely fail-proof,” claims Aron James.

The proposed retail package is an integrated, carton-free tube in the shape of a cylinder decorated with a shrink-wrapped sleeve printed with branding and instructions,which reduces the overall packaging required and provides package differentiation. The primary, squeezable outer tube is made of injection-molded polyethylene; Aron James says high-density PE is preferred because it’s softer and therefore more squeezable. Besides the aluminum and HDPE tubes, the other components consist of  a polypropylene mechanism forming the base of the container and an overcap containing a pair of protective plastic gloves and a small sachet of hair conditioner.

“Brand owners can switch from a large carton at retail to a much smaller tube standing upright. It saves retail shelf space and all the paperboard packaging and, in total, cuts out about one-third of the waste,” Aron James says.

Another advantage of this design is that manufacturers can use existing filling lines with adjustments and modifications.

Besides hair coloring, Aron James says the two-part mixing-optimized packaging concept is also applicable for medical and dental liquids and pastes, industrial silicone, chemical cleaners and epoxy glue's or other types of resins as it can be made in any size.

“Really anything that’s unstable and cannot be mixed together until the time of use or is oxygen-sensitive and needs to be stored for any length of time without activation,” he adds.

The patent has been filed, by Aron James and is interested in finding suitable manufacturers to produce and serve their customers. He acknowledges that two major brand owners already have an interest in testing the concept. He informs Packaging Digest that a best-case scenario is for a prototype to be test-marketed by the fall.

StarOne Group’s concept aligns neatly with on-going trending in this segment. In a video report on Major TrendsDriving the Beauty and Personal Care Industry for 2014 posted in March, Euromonitor beauty and personal care analyst Shannon Romanowski says one important area is on increased emotive experience s attached to these products. “A lot of brands are experimenting with novel packaging and application formats to accompany novel retail concepts to engage and excite the consumer,” she notes.

For more previous innovations from the StarOne Group, see The Drop-Top Dispensing closure from April 2013 and the Smart-Seal Closure Technology from December 2013.

For more information on this innovation, please contact StarOne Group at [email protected]