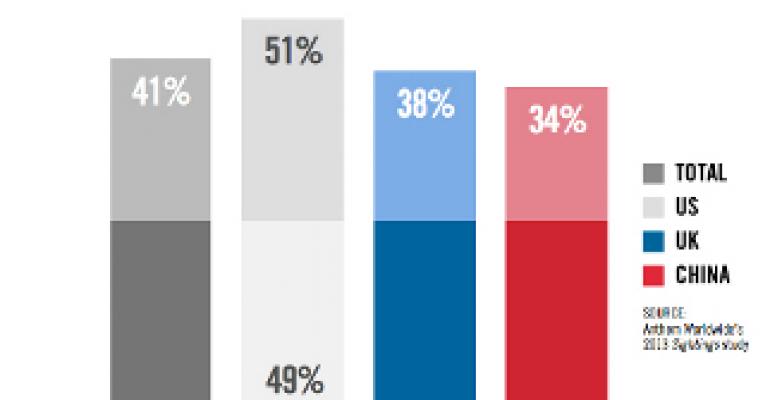 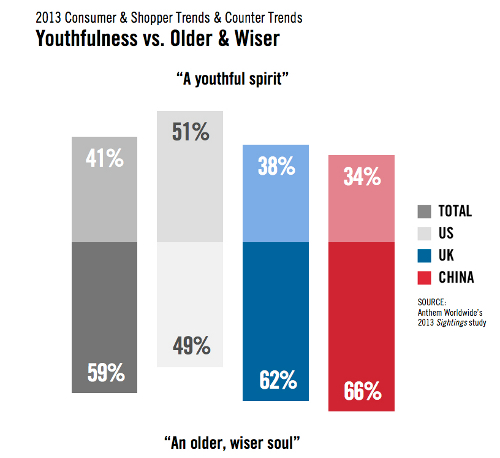 Anthem Worldwide, the brand development practice of Schawk, Inc., announced that its most recent consumer insights study has revealed that Older and Wiser trumps Youthfulness as a trend in 2013.

Anthem Worldwide identified 10 consumer and shopper trends and counter-trends and fielded a study to get a pulse on these sentiments in the U.S., U.K. and China. One of these, Youthfulness vs. Older and Wiser, related to who consumers are. Consumers were asked which they believed would be more prominent in 2013: "a youthful spirit" or "an older, wiser soul." The study conducted by Ipsos from December 17 to 25, 2012, included an international sample of 1,500 people (500 from the U.S., U.K., and China, respectively) from Ipsos' online panel.

The results of the study support the conclusion that in aggregate, across all three countries, more than half of respondents, 59 percent, believe that Older and Wiser will be a more prominent trend than Youthfulness in 2013.

While U.S. consumers were split more evenly between Older and Wiser and Youthfulness (49 percent vs. 51 percent, respectively), consumers in the U.K. and China weighted the results more towards Older and Wiser. Sixty-two percent of U.K. consumers and 66 percent of Chinese consumers believed that "an older, wiser soul" would be a more prominent sentiment.

Kathy Oneto, vice president, brand strategy, of Anthem Worldwide, notes, "In China, this is likely due to the deep-rooted family tradition of having respect for one's elders, along with the forecasted fast rate of growth of its elderly population given the country's one-child policy and improved life expectancy. In the U.K., the high unemployment rate of youth, at about 20 percent, and older people staying and having more presence in the workforce longer may be influencing this sentiment.

"Boomers around the globe still have great influence," adds Oneto. "Older age isn't what it once was, especially for women who find their next act and really come into their own in this stage of life. Vibrancy and energy are still critical and possible with people in this age group not weighed down by expectations and judgment. The lightheartedness that supposedly is present in youth is actually practiced at an older age, with boomers having more presence to shrug off the unimportant."

Oneto concluded, "While not considered to be as prominent, youthfulness will still be in force to some degree, as the youth movement has been impacting elections, creating movements, and stopping businesses over the last couple of years. And while youth around the globe are more challenged and stressed than in generations past, they are also more entrepreneurial and motivated to make a difference in the world. The youthful spirit shouldn't be underestimated; in truth, we all want a piece of it."