Oxygen-scavenging containers made from nanoparticle blends 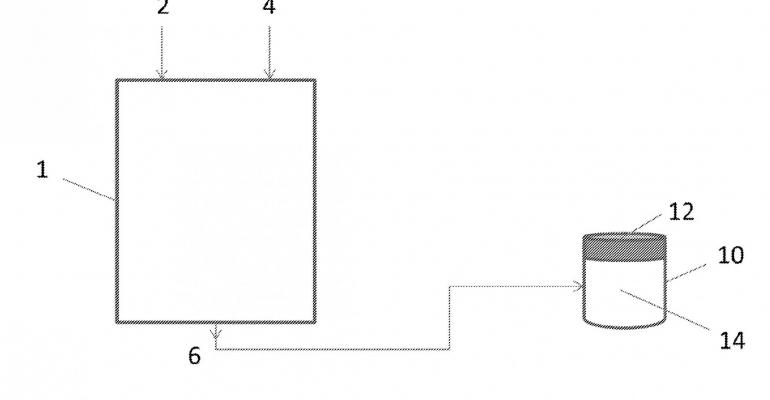 Flow chart showing where a platinum group metal solution is introduced into a reaction vessel with standard mono­mers.

Graham Packaging’s patent published in early February relates to making a polymer composition having dispersed nanoparticles (e.g., average diameter of 5 nm or less) of the platinum group metal (palladium is singled out) that act as an oxygen-scavenging catalyst.  The technology is aimed at preserving the shelf life for oxygen-sensitive packaged foods.

This caught my attention for three personal reasons: these past months nano-anything is fascinating  to me, oxygen scavengers have always been of interest and some years back I visited Graham’s impressive bottle production facility in York, PA, for a story.

In any event, the food or beverage containers made from such polymer compositions exhibit high clarity and high oxygen-scavenging properties. In a large section that has many of the aspects of a lengthy chemistry lecture, something I’m vaguely familiar with from my college days, one aspect shows the complexity of this technology:  “In order to optimize the oxygen scavenging reaction where hydrogen and oxygen react in the presence of the oxygen scavenging catalyst, it is preferable to include a hydrogen-generating material in the container or as part of the container.”

Controlling the scavenging rate via the specialized closure

As explained following the oft-used phrase found in these patents, “in an exemplary embodiment,” is that a closure may comprise the needed hydrogen-generating material that can be selected from among a smorgasbord of materials such as sodium, potassium, zinc or aluminum. It is noted that providing this in the closure allows this rate to be better controlled than if in the container wall.

The main section also identifies the container sizes ranging from 1 mL to 100 L (~26 gallons), which is an astonishingly large range, especially the maximum, to the point it almost seems a typo, which we can presume it is not.

As a possible point of interest to this particular filing is that it is unusually scarce of drawings—just two—which is as few as any I can recall over the past 18 months that I’ve been monitoring packaging-related patents. Although drawings are a crucial part of patent filings, it may be that nanoparticles--or their manufacture as shown in the above image--simply don’t lend themselves to substantive artistic depiction.

During some web-sufing research, I found that Graham is a patent-prolific bottle manufacturer:  The company holds or has applications pending for more than 1,015 design and utility patents. It also claims that 80 percent of its products utilize proprietary technology.

That’s an impressive amount. If your company operates in the packaging market and has more than 500 patents, simply post your comment below or let me know via [email protected]