Bottle with integrated cap remover (shown at right)
A patent filing for inventor Steven Carley relates to an apparatus for removing the twist-off caps of beverage bottles. The invention is a beverage bottle with a bottle-cap-shaped indent on the bottom surface of the bottle, for placing on the cap of a closed bottle and twisting to open the bottle. The design is intended to offset the discomfort experienced by consumers opening bottles with twist-off caps.
www.packagingdigest.com/capremover 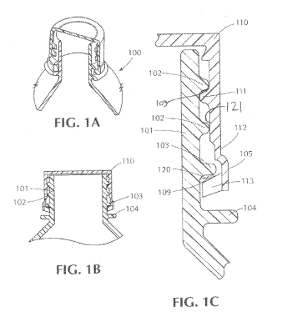 PepsiCo's releasable, encapsulated aroma (shown at left)
This filing from PepsiCo is for gelatin capsules that encapsulate a material that includes at least one aroma compound. The capsule is applied to product packaging, such as food packaging, that has a secondary protective coating at the interface of a container and closure. The gelatin capsules are ruptured when the container is opened, thereby releasing the aroma compound and causing a favorable aroma for the consumer. The secondary protective coating reduces or prevents degradation of the gelatin capsules during product packaging, transport and storage, thereby enhancing their performance.
www.packagingdigest.com/PepsiAroma