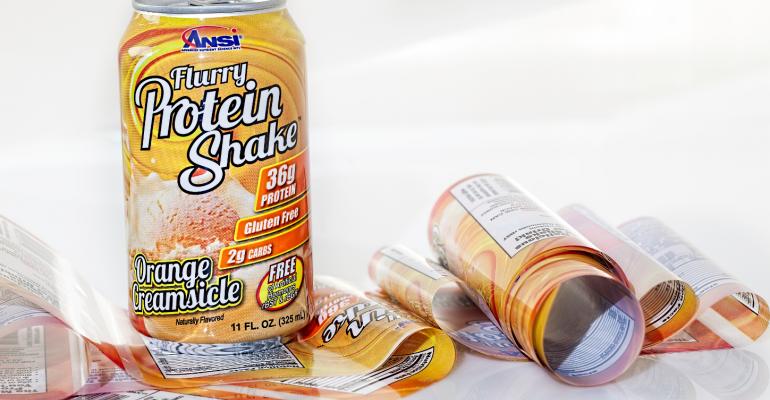 “This is the best-tasting protein shake on the planet,” says Dave McCabe, founder and CEO of Advanced Nutrient Science Intl. (ANSI), located in Largo, FL. Granted, he may be slightly biased. He’s talking about his company’s Flurry Protein Shake, which comes in an 11-oz aluminum “bright” can.

Bright and lightweight aluminum cans are also called “naked” in the labeling industry, explains Sean Keeney, president/CEO of Walle Corp. The company is a leading label supplier to the beverage, food and household-goods industries—including ANSI. “We recommended a roll-applied shrink label for ANSI’s Flurry Protein Shake as an alternative to a pre-printed can,” Keeney says. “The cost is justified because there is likely to be less surplus inventory of obsolete preprinted cans with label messages constantly changing or becoming irrelevant.”

And who would know better than McCabe how quickly the sport-nutrition industry moves on to new trends? It was he who, in 1995, pioneered the first high-protein, low-carbohydrate protein bar, the No.1-selling Pure Protein Bar—for which he became known as the “bar man.” (This was when McCabe owned Worldwide Sport Nutrition, which he sold before buying ANSI in 1999.)

This was the only low-carb, high-protein bar available back then (though hard to imagine now). And McCabe has kept up the No.1-hit pace. “Just one sip will blow you away and leave you wanting more,” says his website of the Flurry Protein Shake. New on the shelves since October 2013, these shakes are low glycemic, gluten free and naturally flavored. They’re also free of rBST and rBGH hormones, and contain only 2g carbs per can.

When it came to decorating the can, ANSI chose leading shrink-film supplier Klöckner Pentaplast and its Pentalabel PETG 50-micron film for a roll-sleeve shrink label. The label provides 360-degree “billboard” display and attracts consumers’ attention.

Dave Kater, business manager, specialty films, at Klöckner Pentaplast (kp), points out a key benefit: “This is a machine-direction-oriented (MDO) shrink film that’s designed for high-volume applications. It shrinks early and quickly— providing uniform shrinkage up to 65%. Our film form-fits on ANSI’s bright can and has heightened appeal to customers.”

Adds Keeney at Walle, “This ANSI aluminum can required more shrink, and for that, kp’s roll-sleeve film is unique because it’s oriented, or stretched, in the opposite direction—in the direction of the label roll. It rotates 90 degrees, yet doesn’t shrink in width. This gives it more tensile strength, so it’s tougher.”

“Just look at our Flurry cans,” McCabe invites. “The colors really pop on the crowded shelves of GNC, Vitamin Shoppe, Walmart, CVS, gyms, health food stores. We sell all over, not just to sport-nutrition places.”

He adds, “I’m the guy with so many No. 1 hits in the industry. Our motto is ‘Cutting Edge Sport Nutrition,’ and that goes for the whole package, label too.”

On the subject of labels, Walle’s Keeney says, “Labeling bright aluminum cans is not new. But with the ANSI can, we needed a greater shrink percentage than is feasible with polypropylene shrink film. We had to use roll-sleeve film from Klöckner Pentaplast,” he stresses. “They are the leading provider of PETG roll-sleeve shrink film; they have the best quality and shrinkage properties. It ends up being less costly, both materially and in its application.”

According to Kater, “Roll-sleeve film eliminates the seaming step. There is no seaming machine. The seam can be made right on the can.”

The seaming is performed on a small rotary labeling machine at ANSI’s contract packager (McCabe declined to identify the company). Strips of hot-melt adhesive are used only to tack the label’s leading edge, and a solvent is applied to the trailing edge to form a secure overlap. Strong enough to resist the forces present during shrinking, quick-setting adhesives appear clean looking and smooth on roll-applied shrink labels.

Kater says, “You can apply roll-sleeve labels simply by modifying existing wraparound label machinery. That means you can take advantage of the high-visibility and superior graphics of shrink labels without making a major capital investment. This technology may be added to many new wraparound labelers as well. Whether this capability is added to an existing line or a new labeler is added, the same line will be able to do shrink labels, as well as the standard roll applied labels.”

“We wanted customers to pick up our can and not tell it’s aluminum,” says ANSI’s McCabe. “We’re looking for a different kind of visibility than that. The aluminum look is old school—today’s cutting-edge graphic labels pop off the shelves.”

In other words, a higher shrinkage percentage allows for greater design possibilities on containers of varying dimensions and contours—while still having the label conform to that shape. And as widely acknowledged by many brand owners these days, shape sells.

But roll-sleeve shrink technology has yet another large benefit: Production flexibility to do high-speed short runs of customized labels for special promotions or tweaked messaging. So McCabe gets his shelf-pop and target marketing.

“Four years ago, we were the first label converter in North America certified by Esko to use its HD Flexo technology. Esko trademarked HD Flexo, which has become industry terminology for a pre-press technology now pretty much standard,” says Keeney. “HD Flexo is a digital plate-imaging technology, making it possible to compete with gravure and offset printing in quality, but with better efficiency and economics.”

Within one hour, computer-to-plate, Walle can image the label graphic and get it printed on one of its 50-inch-wide, roll-fed, 10-color, servo-driven flexo presses (as well as running narrow webs less than 24-inches in width).

Derived from dairy cows, the milk protein in the Flurry Protein Shake is processed using retort technology to produce a shelf-stable product that has an 18-month shelf life. Cans are labeled after retorting.

McCabe is pleased with the Flurry Protein Shake label, saying, “Walle can turn our labels around with really short lead times—with low prepress costs and, as I understand, relatively low energy and CO2 emissions. The detail and contrast on the labels are great. Like I say, the colors really pop.”

Kater wraps up, saying, “The roll-sleeve shrink film offers crystal-clear transparency with low haze, which broadens the capabilities for label printers such as Walle. The visual aesthetic of Pentalabel film after shrinkage is among the best, bar none.”

And in the sport-nutrition industry, aesthetics, or looking good, is part of the package.