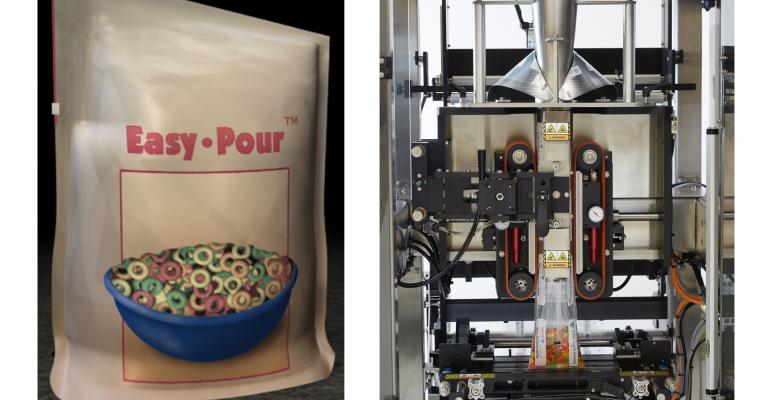 Our story on the Easy Pour Bag from inventor Alan Olin, A 90-degree twist on reclosable packaging, mentioned the inventor’s findings into the machinability of the patented packaging that were based on input from several suppliers of bag-making systems used by converters.

We wanted to dive a little deeper into that aspect in considering the viability of producing the bags in-line on form/fill/seal machinery common to many brand owners’ production operations.

Olin encouraged our effort as he, too, wanted to broaden his contacts and gain useful information for the machinery that could potentially be producing Easy Pour Bags inline at these operations.

We solicited about a half dozen f/f/s vendors—one of which, Matrix, was willing to go on the record—as well as Ray Kondracki, owner of The Kondracki Group, LLC, a consultancy for trade show exhibitors. Ray is a former marketing manager at vf/f/s machinery builder Triangle Package Machinery and has also worked at Yamato Corp., a supplier of computerized multihead weighers that are often used with f/f/s systems. Because he was the first to respond and his input was so thorough, we lead off with his assessment.

In short, Kondracki sees some difficulty in running this package style on a vertical f/f/s system. He also shared the following details to which we have added Olin’s responses in bold:

Replacing standard bag-in-box cereal packaging: If you walk through any grocery store, you’ll notice the box is still king in this market. One of the few cereals that are already using flexible packaging to replace BIB is from MOM (Malt-O-Meal). The bags use a pour-spout-type zipper—basically a half zipper—in the top left corner of the bag top.

“There would be significant investment in consumer education such as through focus groups to get them to see the benefits of this new package,” opines Kondracki.

Olin: I disagree—I think the advantages of my Easy Pour Bag designs will be obvious to consumers and they will like the greater functionality because it will pour better with more control.

Headspace:  In evaluating the video demo from the article link, Kondracki says it appears that there is a lot of head space in the bag. “That seems like wasted space and extra bag material,” he points out. “That’s not being sustainable from a ‘use-less-material’ mindset.”

Olin: The bag on my website video was for demonstration purposes only. In reality, the bag could be filled closer to the top. Also, if one were to stand up any pillow bag, such as Malt-O-Meal's, there would be a large "head space" too. The sustainability of my Easy Pour Bag, as compared to conventional bag-in-box cereal packaging, comes from reducing overall packaging material and food waste.

“Yet headspace is crucial on a VFFS to permit having a good seal on the bag,” says Kondracki. “A taller bag could result in using a taller VFFS machine, which many end-users (food manufacturers) will have issue with in their facilities. It's not an easy swap out current machines because of all the up/downstream equipment. Costs to a consumer packaged goods manufacturer could be significant.”

Olin: The bag could be made with a vf/f/s machine that makes wider bags by using pre-applied zipper material and running the printing/artwork/zipper at a 90-degree angle compared to a typical production. So, in a sense, the bag would be made sideways and filled/sealed from above, like all other bags, into the long side of the bag as it goes through the machine. When the bag is finished and rotated, the filled side would actually be on the opposite side of the bag from the zipper. This should decrease the amount of time to fill each bag.

Angled top seal: “It also appears on the website that some package renderings had angled top seals. I do not see a VFFS being able to do those. I also do not see how a VFFS machine could create the handles, as depicted in the video.”

Olin: I agree, these Easy Pour Bag variations might not apply to vf/f/s operations.

Filling: “If you think about a typical cereal application—or any vertical f/f/s application for that matter—there is usually a multihead scale or weigher above the bagger. The scale deposits product down a tube and into the top of the bag. I am not seeing a 'top' opening on this bag in the video; it’s hard to tell if the top is sealed or if it's just folded.

“I'm not saying the package style doesn't have validity, because it could. But again, there will need to be both consumer research and education to truly understand its validity. That’s before a food manufacturer even decides to adopt the new format. And only then would an OEM typically invest time and costs in determining how to create the package – once a customer says this is the bag style they are interested in.

“There are certainly vertical baggers that produce bags with some of the features (zippers and gussets, but not die-cut handles) shown in this particular package. Doing several of these features on the same package, in the manner they are shown in the video, could take some engineering. Some OEMs will have more engineering capabilities than others. Speed could be an issue as well. The more features you add, the slower speeds you have to run.

“In the end, I see this more as a premade bag style package to run on a horizontal f/f/s machine.”

Olin: While the vf/f/s version of the Easy Pour Bag would probably not include handles or angled tops, the main features, such as the reclosable opening along the side of the bag and the self-supporting capability, are achievable.

Kondracki’s evaluation is based on his experience—the thoughts are his, not of his former employers. He can be reached at [email protected]; his LinkedIn profile is www.linkedin.com/in/raykondracki 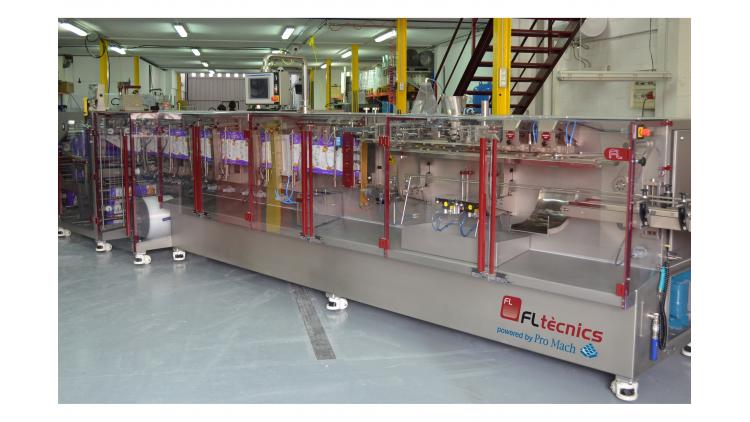 With modifications and using a preapplied zipper film, this horizontal f/f/s machine is capable of running the Easy Pour Bag. Photo: FLtecnics via Pro Mach

A second responder was also willing to go on the record: Troy Snader, senior vice president, Pro Mach Flexible Packaging Group.  “I think it’s a very interesting idea, and I agree that the cereal industry will probably be most interested as we are seeing them look pretty hard at stand up pouches now,” he says.  “At first glance, producing the side resealable pour spout bag on FFS equipment appears feasible. A couple options might include:

“It would also be interesting to make bags on a FLtecnics machine and then run them on a TYJ,” says Snader. 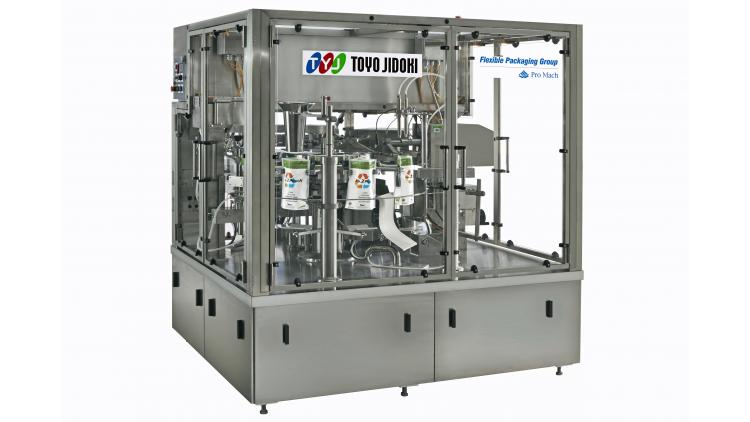 For operations with many changeovers, a proposed hybrid setup pairs the FLtecnics machine (top of page) with this pouching system. Photo: Toyo Jidoki via Pro Mach

Our third and final contributor, a major supplier of vertical f/f/s systems that wished to remain anonymous, also responded with a technical assessment along with Olin’s responses in bold:

One of the main issues that we can see with these type of bags is that zippers and other resealable closures have a rigidity to them that holds the opening closed. As a result, the zippers will need to be relatively long—approximately 4-6 inches—so that that they can be deformed enough to make a suitably large opening for product to exit.

This has two consequences. Firstly, the need for a long zipper means the opening will be relatively large so product will exit over a wide distance, which could potentially cause spillage.

Olin: The opening will need to be around 5 to 6 inches and, because it is located along the side of the bag, there will more control and less spillage compared to bags that pour out of the top. The video on the website shows how easy it is to pour from this type of bag.

Secondly, if the bag itself is only about 15-inches tall then it could only be filled to about 50% as the filling of the bag cannot exceed the height of the bottom of the zipper to prevent contents from spilling out once the zipper is opened.

Olin: A 15-inch tall bag with a 5-inch-long opening will allow the bag to be about two-third's filled. Most current stand-up bags and pouches are not filled up much higher than this.

Depending on the weight of the product, this could also have a consequence on whether the bag will be able to support itself. For example, while the bag might be able to support itself if it contains a heavy product like pet food, a half full bag filled with a light substance may not be able to stand up without the support of a box. In addition, while self-supporting bags may have some environmental benefits over bags in boxes, they are less stackable and will take up more space on a shelf as the contents expand the bag towards the base.

Olin: I agree that a very light product weight will make the Easy Pour Bag, as well as all the other current standup bags/pouches, less stable. In regards to stand-up bags vs. the bag-in-the-box, I feel that the sustainable features of reducing packaging and food waste outweigh the stacking disadvantage.

There are also a number of considerations when it comes to the practicability of the bags and their use on vertical form-fill-seal machines. One of the main issues here is that longitudinal seals on VFFS machines require jaw widths of the same length to seal the zippers, should they require a post-seal process. However, our high-speed vf/f/s systems are typically fitted with jaws that are one inch or less, so supplying jaws that are six inches or thicker would not be in line with our commitment to providing our customers with the best levels of performance. As a result, manufacturers would probably need to source premade film with the zipper already applied to run these types of bags on high performance vf/f/s machines, which it’s likely going to increase their overall production costs.

Olin: I agree that pre-applied zipper film would be the best way to make the Easy Pour Bag on vf/f/s equipment and this could add some cost; however, it would probably save a lot of time.

In addition, manufacturers will also need to consider the type of film that is being used. With this type of format, it seems that the top of the bag needs to be pushed towards the base of the bag to deform the zipper to make the opening. While this may work well on bags made of a relatively thick, rigid film, it could be impractical for bags made of thinner, more flexible films.

Olin: On a vertical f/f/s machine the bag would be filled from the side of the bag as explained previously in this article. Also, larger stand-up bags typically require stronger or thicker film regardless of where the reclosable feature is located.