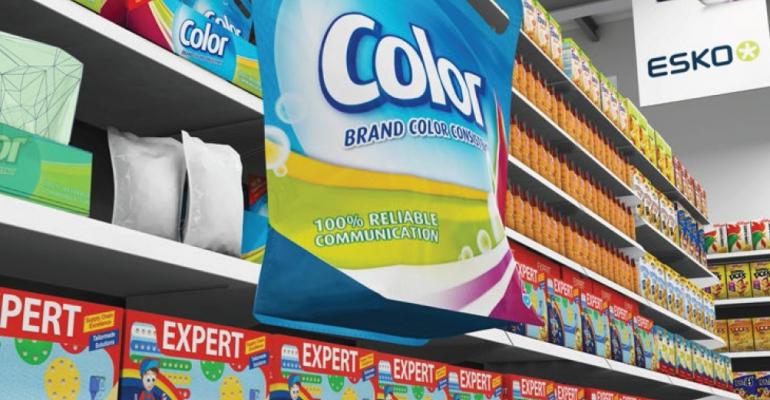 Studio allows users to visualize packages in 3D--and overlayed onto store shelves if they wish.

Esko’s Studio suite that centers on packaging design projects for boxes, flexible packaging, labels and shrink sleeves offers up some fresh improvements that push the capability of tools used for packaging design.

While perusing some of the tabletop exhibits at Packaging Digest’s Global Food & Beverage Packaging Summit in July, I came across a demonstration from Esko that can virtually place packaging mockups into real-world environments such as onto store shelves. In addition to the wow factor of this particular application, it turns out that the Studio suite of applications offers up many additional options that are enhanced in a just-released version.

Michael Naughton, Esko’s pre-sales solution architect - brand owners, responds to our questions about how the software can be leveraged by brands and packaging designers.

What’s the background to this software?

Naughton: Originally introduced in 2008, Studio is a suite of solutions centered on packaging design. It incorporates intelligent dielines and 3d modeling to help facilitate package design and create virtual mock-ups.

Studio is tied into Adobe Illustrator. It is comprised of a set of plugins to help designers and prepress operators become more successful. Studio enhances the Illustrator offering.

What industry drivers does it tap?

Naughton: Brand owners are driving most of this. It addresses the ability to create designs and receive instantaneous feedback from the brand owner. It also allows brands to use this virtual packaging on ecommerce sites. It's even starting to replace some photography. Most important, it reduces the time that was traditionally used to create on physical mockups. It accelerates the design process and provides a simple packaging concept approval tool. Instead of sending physical mockups to a number of locations via overnight delivery, the designs are simply attached to an email message.

What’s involved and how is it used?

Naughton: Studio is a series of Adobe Illustrator plugins and standalone packaging creation tools for boxes, flexible packaging, labels and shrink sleeves. It is used within Illustrator, in the creative sense, to help designers, prepress agencies, ad agencies and internal resources within brand owners to move a product from the conceptual stage all the way up to pre-physical mock up approval.

Designers and operators import a structural design file into Illustrator and add artwork from graphics files. They can design from either a two-dimensional flat or from a three-dimensional view. The 2D flat shows up instantly on a 3D model. The resulting artwork can be exported into an Esko workflow or to an external workflow or file format for viewing.

How have customers used it?

Naughton: Studio is used for all types of packaging. Beyond 3D packaging like flexible packaging, folded cartons and corrugated, it also works with labels. Studio works very nicely with non-Esko modeling programs that export the Collada file format—which is just like a PDF of the 3D world.

Users can move bottles back and forth between Esko and non-Esko solutions. For example, while labels are 2D, they are placed in 3D products. In fact, one of the Studio modules allows prepress shops to determine the distortion of shrink sleeves when placed around unusually shaped bottles.

Studio is also used for conceptualizing. It can turn around digital product simulations very quickly before a company goes to more expensive and some consuming physical mock-ups and print runs. Studio can easily show a wide range of material special effects like embossing, foils, and holographic art.

With Studio there are also ways users can create and stack products inside a pallet. This means that Studio will not only create individual packaging prototypes, but stand-up displays like end caps, as well. Store Visualizer will let the user test the visual impact of a design in the environment where it all happens: the store. They can create virtual retail environments with Studio Store Visualizer, and see the new designs on the shelf next to the competition, or present a complete product launch in 3D, including retail-ready packaging, displays and other branded items. With the ability to build a virtual store to emulate a real store environment, a user can now extend Studio's use from showing a few products on a shelf to an entire end-aisle display.

What value does it bring to users, especially for brand owners?

Naughton: There is a much quicker design approval process, resulting in faster time to market. This solution is very visual. What you see is the rendered final product before it even exists.

Brand owners are able to see much quicker 3D representations. They are also no longer limited to specific angle shots. The can spin the product around, look at the barcode, the Nutrition Facts panel, see how panels match and come together—basically everything as if they were holding a product physically in their hands. Esko even offers a free iPad/iPhone app to spin around or place the product in any environment with Augment Reality.

A good example of this is IKEA. Although IKEA does not use our technology, it uses a similar app for their furniture so that people can see how a couch, for example, might look in their living room. 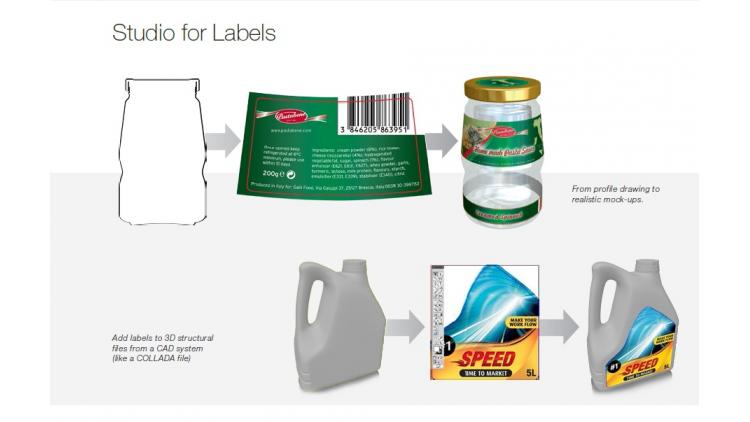 Another app within the suite allows users to create labels and apply them to virtual containers.

And what kind of interest have you seen?

Naughton: There has been lots of interest, particularly over the past 18 months. Using a virtual 3D view is becoming standard procedure and an expected way to use the technology by a lot of brands. The word has gotten out because of shows and presentations Esko has done. It is becoming a common step in the process, and people are asking for that use of technology. It's almost becoming expected by mainstream brands.

Even brand management is asking, "Can you send a 3D PDF viewing file?"

While there are many recognizable brands that refer to this technology, Esko cannot divulge their names.

Please comment on the key features in the new version.

Naughton: Esko Suite 14.1, an upgrade of most of its software, was announced July 17. One of the major new features in Studio is an enhancement to the visualization of special effects in the 3D model. There are now lighting controls in the virtual store. There is lighting and shadows on the shelf. Those features that were announced include: