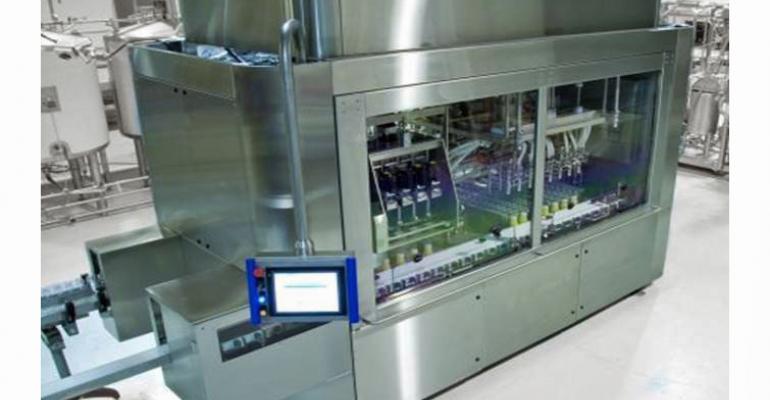 This aseptic bottling system fills a huge gap between benchtop and production.

Move over Games of the XXXI Olympiad, there were at least one world’s first (and another U.S. first) seen at the IFT16 event held in July at the annual tradeshow of the Institute of Food Technologists. Here, in Chicago's McCormick Place, packaging was to be found scattered among the hundreds of ingredients-laden booths.

Not just packaging, but truly innovative packaging centering on a common theme that connected four of the booths: Aseptic packaging.

Examples stretched across production, R&D and material/container branches of packaging, including the first aseptic laboratory fillers in the world for R&D, introduced at the show by MicroThermics.

The fillers are available in two models, the X250 and X500, for 250 and 500 bottles per hour respectively; both are for high-acid products that fill 250mL or 500mL bottles and offer options such as semi-automatic or automated capping.

“These fill a huge gap between benchtop and production,” says vp David Miles. “It’s an aseptic packaging machine for R&D that doesn’t rely on an operator.” 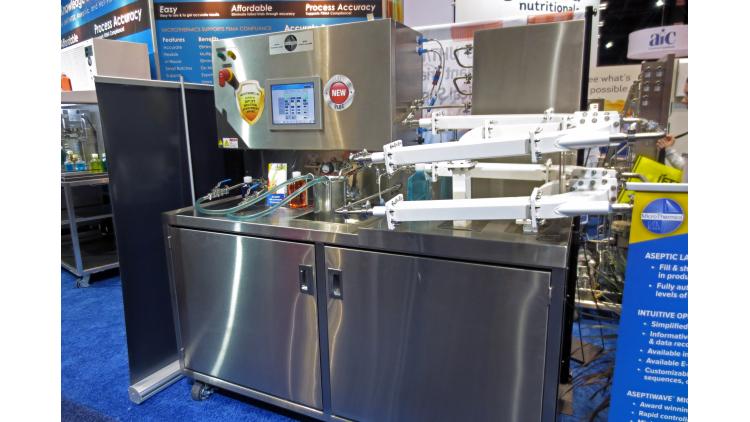 Read more about AseptiWave and the breakthrough BioPods next.

Explore cutting-edge packaging, manufacturing and automation solutions from hundreds of exhibitors at MinnPack (Sept. 21-22; Minneapolis). Use discount code PDigest16 to get 20% off your conference registration. 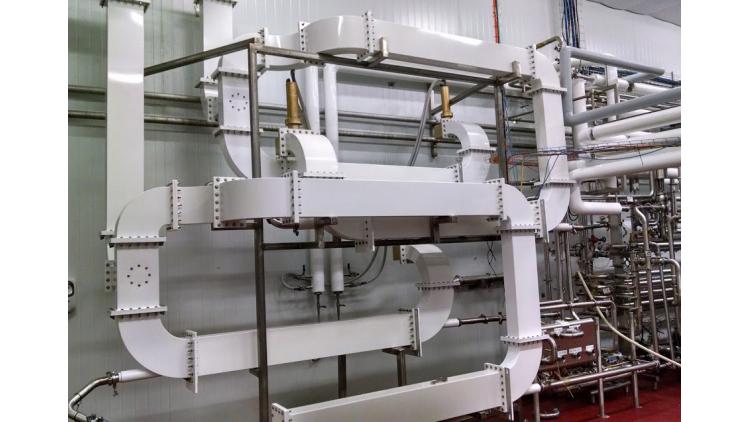 At Aseptia’s booth, which was focused on aseptic processing using microwave energy, I spoke with cofounder and science advisor Josip Simunovic and Samir Masri, manager of R&D. Commercial for five years, AseptiWave is available in three configurations from 1L per minute to 40 gallons per minute for benchtop, pilot or commercial operations.

Some of the atypical foods being tested include mashed potatoes and hummus, Simunovic disclosed. AseptiWave systems have been particularly optimized and validated for processing of complex particulate aseptic products like fruit pieces in juice, salsas, stews and chunky soups.

Simunovic said there is tremendous interest in aseptic flexible packaging by brand owners and others in the wake of continuing concerns related to bisphenol-A (BPA) linings found in cans. 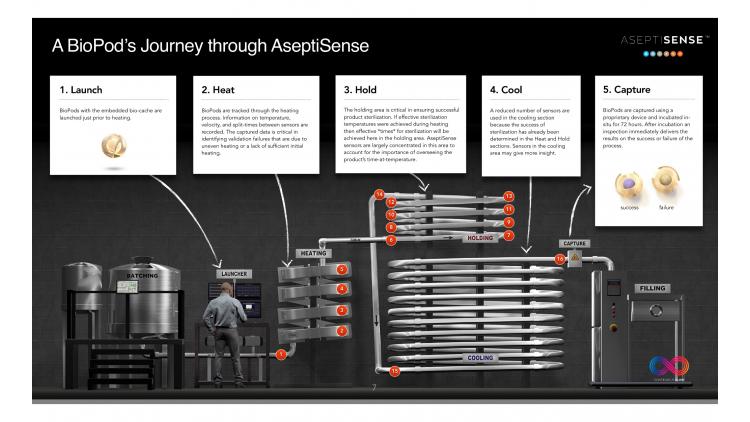 The above graphic is part of Aseptia rebranding and design done by borderlandllc.com

Besides AseptiWave, Aseptia also promoted AseptiSense technology that uses pea-sized or other shape of BioPod sensors to simplify validation of customers’ aseptic processes. These “bio-implant carriers” contain a sealed bacterial spore suspension within a customized and calibrated enclosure that mimics any particulate. BioPods are designed to match the sizes, weights,thermal characteristics, and densities of the particles they are simulating. Aseptia maintains a BioPod “library” to match various shapes, sizes and densities of simulated particles. 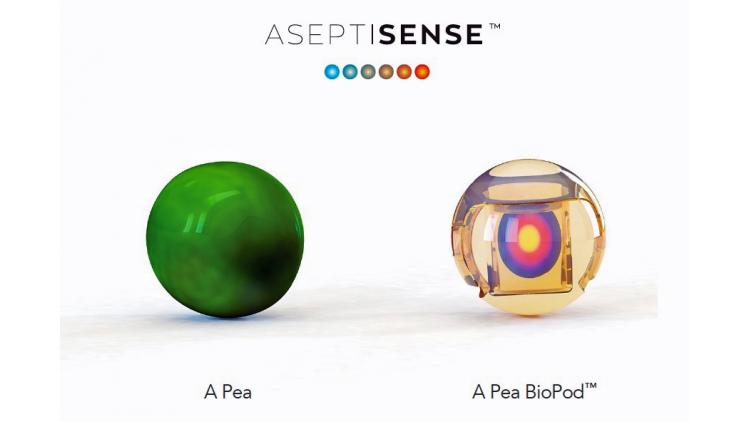 Once individually tagged and released into the test or customer aseptic processing system, they are monitored and captured just prior to filling for incubation and analysis. During their journey, the BioPods reveal real-time data that permit researchers and engineers to “see” what’s happening thermally at any point within the brand owner’s processing system.

“The BioPods are applicable for direct, tube, ohmic or microwave processing,” explained Simunovic, “and were FDA validated to a 5/8-inch particle size in late 2015. Our customers for AseptiSense include several of the top five global food companies with more testing currently under way.”

Next: A new development in e-beam technology 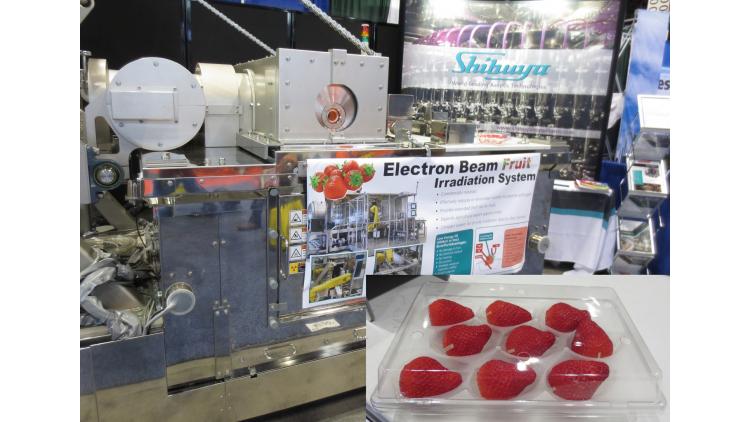 On a related note, a new machine from Shibuya Hoppmann, a packaging machinery vendor primarily known for its aseptic systems that rely on electron-beam (EB) sterilization, showed for the first time in the U.S. the EB Fruit Irradiation System. It effectively reduces and/or eliminates harmful food-borne pathogens, such as E. coli and Salmonella, on the surface of fruit. The nonchemical process can extend the shelf life of fruit such as strawberries or fresh vegetables from 5-7 days to up to 14 days or more. The retail unit of PET trays are processed by the system at rates of 180 trays per hour.

System program manager Chad Ellis says the company has a test system operating in Japan. You can read more about the new EB system in this white paper PDF.

Shibuya has supplied a total of six Aseptic EB Filling Systems to two prominent major beverage brand owners in Japan—three systems each—that run up to 600 bottles per minute. All are PET bottles, with the newest product being PET bottles for tea launched in early 2016, Ellis noted.

Next: A very large aseptic container 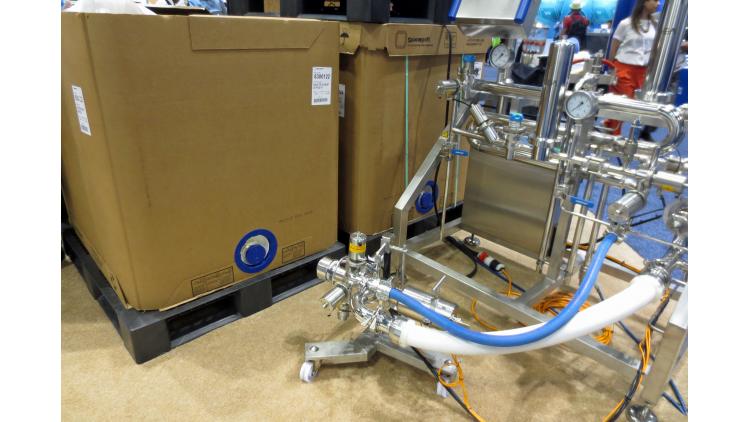 The one-way system eliminates the need, cleaning and tracking/return of stainless steel IBCs.

It is compatible with existing filling systems, includes an EVOH high-barrier irradiated liner and is said to be 100% recyclable. 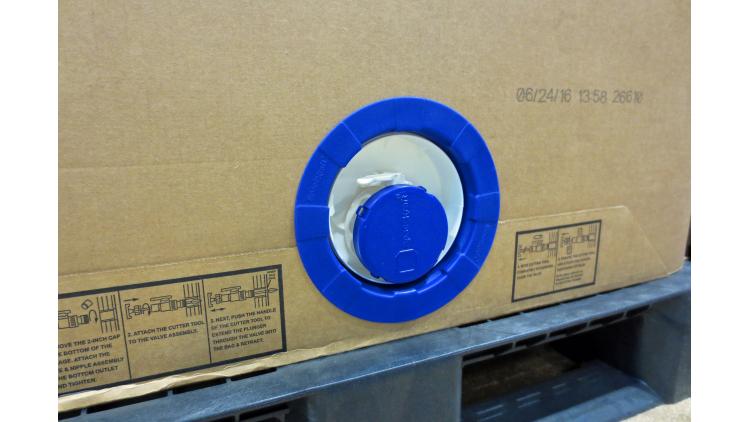 One of the keys to the container is a custom, tamper-evident DN50 size valve that maintains asepsis; the demo filling system in the booth was from GEA. Sanitary threads permit steam sterilization to 145 deg C/293 deg F.

A PDF of the SpaceKraft Aseptic IBC can be found here.