Promising Packaging Patents: A leak-proof closure with a 3D seal 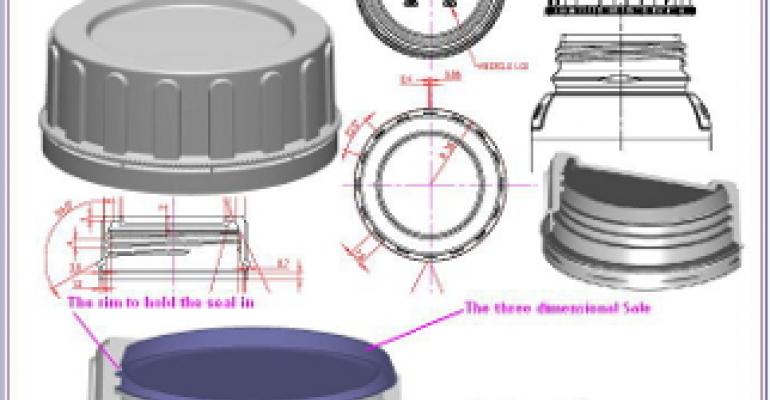 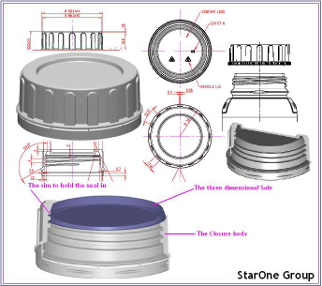 Necessity is the mother of invention, which is as true for package development professionals as for garage tinkerers. We spoke recently with Aron James Clarkson, designer-inventor and CEO of StarOne Group, who says he's in business to "invent, design, and develop new technologies. We make sure that the patents are worthy and have meaning because there's no point in owning patents if they don't really work."

The search for a new concept resulted after his firm began working on problematic containers for crop control products for a multinational chemical company.

The 1-, 5-, and 10-L containers usually molded of HDPE were notoriously leaky, not good for chemicals and certainly not welcome around humans and especially children.

The top lip of these containers are sealed with a plastic closure supplied with a flexible disc made of polyethylene polymer comprising of micro air-cells extruded into flat sheets which are punched into round disks that become the wad or inner liner of the closure.

Aron describes the existing method of sealing these type of containers using closures with wads only comprising of a two-dimensional flat wad that only engages and seals with the narrow top rim face of the container edge. He goes on to say that this out-of-date method of one dimensional sealing that is widely used throughout the packaging industry for many different products, does not work in the way it should. Many times result in faulty leaking closures on containers that are filled with dangerous chemicals being transported to market and many times when tested do not comply with the UN charter safety guidelines, he adds.

According to Aron the problem is that the extrusion blow molded containers vary in thickness including across the critical top portion of the container including the threads. This is exacerbated by on-going light-weighting/thinwalling of the containers and closures to cut costs and because of this the closure has little chance of sealing these very light-weight blow molded containers in the way they need to be sealed especially if you are needing to rely on them to store or transport harmful chemical products in them.

"There's just no way you can get a proper seal," observes Aron James.

Tightening the closure down more using higher torque (12 to 14 Newton meters force) ends up cracking the closure and simply makes the situation much worse, he adds.

StarOne Group was called in to not only solve the problem, but to do so realistically and without increasing costs, Aron emphasizes. His idea was Smart-Seal Closure Technology.

"That means the closure uses all three container sealing edges, the outside edge of the container, across the top edge, and down on the inside edge of the container," Aron explains. "The actual surface of sealing becomes three to four times greater than a normal closure on such containers. So instead of sealing it only a one and a half millimeter across the top lip edge we're also sealing about two to three millimeters around the circumference of the container. We've basically increased the surface of the seal area around 60 to 70 percent more, which is a substantial increase on the old traditional sealing methods currently used and certainly has not before been possible to do with other types of closures."

Aron has also developed a new way to produce the sealing wads which inserts into the matching three-dimensional closure body to obtain the optimized result and maximizing all the sealing wad properties.

"We take that same PE material foam sheeting and then laminate it with a PA or EVOH protective film and then re-mold it into a three-dimensional shape using pressure," he explains. "However, it was certainly not easy and took a lot of development as we had to make a compression molding machine by modifying an existing machine used in another industry to high pressure-mold the three-dimensional wads in a very inventive way to perfect the specialized sealing wad in high volume."

The development has taken three years. At this point, Aron has developed the total closure Smart-Seal system and is currently negotiating with sealing wad manufactures for the production and supply of the wads to closure and container manufacturers throughout the world; depending on diameter, each machinewill be able to produce around 300 to 400 million wads yearly.

Aron reports they have many companies who are very interested in being part of this new Smart-Seal Closure technology supply-chain and are starting to talk to customers to implement this for dangerous chemicals and other products. "This 3D sealing technology can be utilized to seal containers in many different industries not only in dangerous chemicals but very high-volume arenas like food, beverages, personal care, pharmaceuticals and is a very flexible sealing system and has a wide span of use," he says.

Containers can now be lightweighted

It also yields a major side benefit: Not only is it a far superior improved sealing method, containers now can be further lightweighted to save cost.

Made of the same material but now with many more benefits than traditional conventional liners, the Smart-Seal wad carries about a 20 to 30 percent premium over standard liners that cost a few cents; however, the savings in light-weighting containers further reduces the cost of the containers substantially. This results in savings in the overall costs at the same time it assures the customer that the containers will not leak like they have before.

StarOne filed the patent a few years ago; the patent also has an allowance for an aluminium induction 3-D sealable version which has very high-security child tamperproof that also reduces any chance of any harmful chemicals leaking out if an accident was to occur or through transport or handling for any reason.

He reports that feedback has been "incredible. With this system it really makes no sense to have a two-dimensional seal anymore." Interest is especially high from a number of closure and container manufactures especially for the use of harmful chemicals such as crop control, he adds.

We asked Aron James what he thinks about patents and why they are important.
"The only true test of a patent is whether or not you can develop and commercialize it," he responds. "Does it have a meaning in a cost-effective way? This particular technology does as the only way you can really protect your territory in the marketplace is to invest in intellectual property so other companies cannot compete against you which gives you an advantage for many years without direct competition in your sector."

What does the future hold for you with this new sealing technology?

"I believe that this old two-dimensional sealing method currently used to seal many types of different containers will be a thing of the past very soon once this news gets around the packaging industry about the Smart-Seal Closure system making the old system redundant," Aron responds. "Companies will move over to a much more reliable and safer way of sealing their containers at the same time as reducing the thickness of their containers through light-waiting them and bringing down the overall cost in packaging. This can save their company many millions of dollars per year with this new superior sealing technology at the same time improving the safety and reject rate they are currently experiencing with leaking containers today."

What type of companies are you looking for to be involved in this new technology?

"We are interested in companies who are proactive in doing the right thing for the customer and for the consumer by putting safety first and reducing the number of accidents through unsafe products leaking. For companies that can see the big picture of all the other benefits that this new closure system has to offer we will be licensing this 3-D closure technology throughout the world. This includes companies that manufacture plastic closures and containers for packaging all types of products in the Beverage, Food, Personal-Care, Pharmaceutical and Chemical."