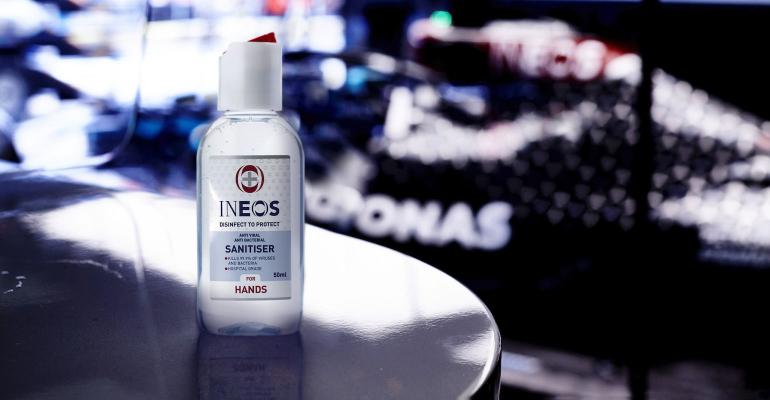 Back in March of this year, sister publication PlasticsToday reported on chemicals company Ineos planning to build a hand sanitizer plant near Middlesborough and begin producing hospital-grade sanitizer at its facilities in Grangemouth, Scotland, and in northern Germany in massive quantities. The intiative was in response to a shortage of alcohol-based hand sanitizer, which had disappeared from store shelves as consumers went into panic-buying mode.

Ineos took that initiative a step further on July 30 by announcing the launch of a global healthcare business, Ineos Hygienics. It will produce hospital-grade hand gels, sanitizer sprays for hands and surfaces, and sanitizer wipes for the home and to the public, it said in a news release. The official launch of the business is being announced during British Grand Prix weekend, which begins today and runs through Aug. 2. Ineos Hygienics is supported by six-time double world champions, the Mercedes-AMG Petronas Formula One team, which will carry the brand’s name on its car.

Ineos is exceptionally well positioned to market sanitizers to medical facilities as well as consumers, since it is the world’s leading supplier of high-purity synthetic alcohol, the company told PlasticsToday. “Our sanitizer product range is based on our own high-purity alcohol, which is manufactured under strictly controlled conditions to meet the specialist requirements of pharmaceutical and medical applications."

Made from a 75% alcohol solution, as recommended by the World Health Organization, the sanitizing agent is used in numerous medical and pharmaceutical applications, noted Ineos, many of which are active in some way in slowing the spread of COVID-19, preventing its transmission, treating those infected, and even in the search for a vaccine, said the spokesperson.

Although Ineos is a newcomer to the consumer hand-sanitizer space, it is confident that it will garner significant market share, because “we produce the highest quality medical-grade ethanol and we are the largest producer of ethanol in the world,” Ineos told PlasticsToday. “This gives us an advantage in the market, as our product has the best quality ethanol in it.” And the company believes that demand for hand sanitizer will not ebb if and when the pandemic recedes. “Covid-19 has changed the way that everyone views and values hygiene and I think hand sanitizers will become an everyday part of people's lives,” said the Ineos spokesperson.

The Ineos Hygienics business actually took shape during the pandemic, when Ineos built six factories — each of them in less than 10 days — to produce millions of bottles of sanitizer that were distributed free of charge to hospitals. Now officially launched, Ineos Hygienics will begin by marketing hand sanitizer and anti-bacterial wipes, but it will add other product lines in the near future.

“To date, we’ve delivered more than four million bottles of sanitizer to hospitals around the world, bringing confidence to thousands of frontline medical staff and care providers,” said George Ratcliffe, Chief Operating Officer of Ineos Hygienics, in a prepared statement. “Now, we’re able to offer that same level of protection to the public. Ineos sanitizer products will now help us all to target viruses and bacteria with confidence at home, at work, and beyond.”

Ineos Hygienics has its headquarters in the United Kingdom, where it operates a plant in Newton Aycliffe. It also has facilities in Herne, Germany; Etain, France; and Jacksonville, FL, and Neville Island, PA.