Custom-built cartoner is loaded with technology 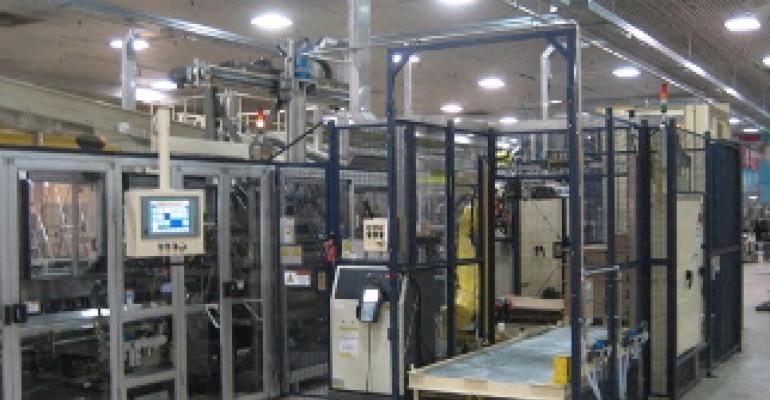 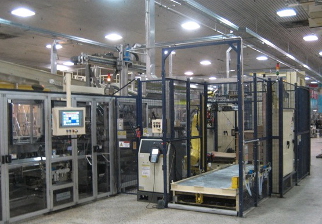 There is a saying in retail that the package sells the product. While this might not be true across the board, for OEM machine builder R.A. Jones, located in Covington, KY, the package does indeed sell the product-the company builds packaging machines and cartoners for a wide range of applications. When a U.K.-based spirits distiller changed to a new carton for its high-end Scotch, it turned to R.A. Jones for a cartoning solution. With the help of Siemens motion control components, software and engineering support, the resulting machine was so successful that the company ordered a second version even while the first was being commissioned.

One of the challenges of this project was the speed requiredthe process needed to run at 300 bottles per minute with a 10 percent surge capability. The machine had to separate the incoming bottles, transfer each into an article bucket, bring the bucket into the machine, erect the carton, transfer the bottles from bucket to carton, close the carton, stand it up, then discharge it from the machine. This complex sequence had to be performed at a rate of five times per second.

Additionally, the project had very stringent quality requirements. Because the product was a high-end Scotch, there was virtually zero tolerance for any marks on the bottle, the label or the box. The customer wanted the ability to reject individual cartons, individual bottles or cartons with no bottles in them, all without derating the line. The line needed to be able to switch rapidly and easily among packaging 700-mLl, 750-mLl, and 1-L bottles for two premium brands. To further complicate the process, the bottling plant is located in Scotland, while R.A. Jones is based in the United States.

R.A. Jones has a standard line of product platforms, but where it really shines is in customization for challenging applications. "In general, we are known for high speed and flexibility," says William Kaup, Technical Sales Manager at R.A. Jones. "While we have standard product lines, many customers come to us for custom or complicated projects."

Often, the OEM machine builder develops a solution by making a few modifications to an existing platform. That was not the case for this project, however. The engineering team nominally started with R.A. Jones' Meridian cartoner design, but instead of augmenting 80 percent standard platform with 20 percent customization, the project followed the opposite ratio. "We knew it would be an engineering-heavy, custom application," says Kaup. "The high number of axes required for this project, in and of itself, placed this system at the high end of the complexity scale that we see."

The cartoner incorporates 27 axes powered by Siemens servo motors and Sinamics S120 drives. Although much of the machine leverages what Kaup characterizes as fairly standard coordinated motion, some aspects required more. To address all these needs, the engineering team chose the Simotion D445, which integrates the capabilities of a PLC and a motion controller to offer significant intelligence and processing power in a compact form factor.

"The D445 works with compiled code versus assembled code, so it is faster," says Jason Barter, application and development engineer at R.A. Jones. The Simotion D445 provided all the processing muscle for the cartoner, allowing the team to use the Sinamics S120s as passive drives. "This solution worked well," Barter adds. "For a 27-axis machine with one processor, the overall throughput of the machine was very efficient."

To connect the drives to the D445, the team used Siemens' Drive CLiQ. An Ethernet backplane based on a 100 Mb/s serial interface, Drive CLiQ automatically captures nameplate data and validates components, simplifying device integration and replacement by maintenance staff. After all, plug-and-play operation only works if the right device is being plugged in. "Basically, [Drive CLiQ] recognizes that the correct motor and drive for that particular axis have been connected, so someone would not be able to put in the wrong size motor or wrong size drive," says Barter. "It helps the client get the right components in the right place."

Maintaining continuous operation at 300 bottles per minute required an automated carton-loading system to ensure a steady supply of packaging materials. In the carton-loading system, a robotic arm from an outside vendor picks up cases of carton blanks from a pallet, inverts them, and sets them, case and all, in the magazine of the cartoner. The Jones flexbot, a two-axis pick-and-place unit powered by Siemens servo motors, lifts the case off of the stack of blanks and sets the empty case on a trash conveyor. The two-axis pick-and-place unit was controlled from the cartoner's D445 controller as part of the 27 axes. The Siemens support staff developed custom function blocks to allow the R.A. Jones team to more easily program the equipment.

With a system consisting of a 27-axis cartoner, the robotic-arm carton loader and a pallet handling system, the number of connections added up.

"We had two racks of Siemens ET200S I/O on the cartoner," says Barter. "It was quite an extensive machine." The pallet handler and de-palletizing robot formed a system by themselves. The pallet handling system was controlled by a Simotion D425, which interfaced with the robot controller over Profibus. The design team integrated the pallet handling system with the cartoner by way of a Profibus connection between the D445 and D425. "We interfaced the robot controller with the Siemens D425 controller just to get some [communications] back and forth and also interfaced that controller to the cartoner," Barter continues. "We connected the D425 to the main cartoner machine controller (the D445) over Profibus, and then ultimately those two machine controllers communicated with one HMI over Ethernet."

Although the interface between the D425 and the robot was straightforward, having two machine controllers communicating with a single HMI provided more of a challenge. The Siemens engineering team stepped in to help. "Between Siemens and our distributor, we had quite a bit of support to ensure that we could progress through the development and factory acceptance test of the equipment as rapidly as possible," Kaup notes.

Troubleshooting at a distance

In addition to the performance specifications, the customer wanted to incorporate remote access to allow R.A. Jones support engineers in the United States to be able to access the machine online. Here, too, Siemens supplied a solution: the Scalance S612 security module, an industrial-Ethernet switch that provides secure remote access through Internet gateways. Using the Scalance security module and standard Siemens engineering software, R.A. Jones engineers can troubleshoot the machine as though they were standing right in front of it.

The approach not only saves the cost of flying in support staff, it reduces the downtime spent waiting for them to arrive. On a packaging line that processes high-end spirits at 300 bottles per minute, this is an important benefitan hour of downtime alone can add up to hundreds of thousands of dollars. The Scalance S612 has already been used to resolve minor issues, Kaup says. As an important side benefit, R.A. Jones engineers have also been able to combine that connectivity with the machine network to access the robot arm on the pallet handling system, even though it is not a Siemens product.

The finished cartoner was shipped from the R.A. Jones facility to the spirits distiller's plant in Scotland on nine full-sized pallets packed into three freight airplanes. With its combination of hardware, software, and engineering, the machine has achieved a maximum speed of 330 cartons per minute, which meets specification with the required 10 percent surge. "The machine is running well, with only a few application specific issues to be resolved," says Barter. Based on the success of the first machine, a second one was ordered.

"Although we had used the Siemens Simotion D on several of our other standard product lines, there was a learning curve [with the first machine] because this project was on a much larger scale than we had previously done," says Kaup. "The second machine went much more smoothly."

The success of the project came from a combination of quality components, careful design and a tight engineering collaboration. "I think the engineering support provided by Siemens and our local distributor, C&E Sales, was vital to the success of the project," says Kaup. "I do not think the development could have been done in the timeframe required without that assistance."

The package may sell the product, but in this case the product sold the packager and the result was repeat business, a satisfied customer and a new set of tools to use for success.