Robots have gone from conceptualization in far-out, yet farsighted science fiction novels to where they are no longer a novelty on packaging production operations.

That’s not just an impression, it’s a fact: The industry’s trade group, the Robotic Industries Association [http://www.robotics.org] (RIA) estimates that approximately 232,000 robots are now at use in United States factories, placing the U.S. second only to Japan in robots.

The North American robotics market has recorded its strongest year ever in 2012, according to RIA statistics, when a total of 22,598 robots valued at $1.48 billion were sold to NA companies, beating the previous record of 19,337 robots sold in 2011.

The latest RIA figures reported in late 2013 show mixed news: NA robotics orders have declined while robotics shipments have soared. However, there is a caveat: The slowdown comes from the automotive segment. Sales activity continued to be especially strong in non-automotive industries including Food and Consumer Goods, all of which posted double-digit growth through September.

Anyone who has followed packaging over the years has witnessed the rise of the robots in packaging operations, trending upward as each generation of robotic systems have become nimbler, speedier and smarter…and more cost effective.

For example, a major commitment by Woodbridge Winery to switch to bulk glass loads was justified by high-speed robotics on the infeed side where even removing the loads’ unitizing materials is done robotically (see Woodbridge Winery bulks up production and takes up boxing).

Companies like Voortman cookies have added carton-packaging robots—a well-coordinated trio of robots, no less—to its recipe for producing and packaging cookies efficiently. It also uses Delta-style robots to pick-and-place the fragile cookies into trays (see Robotics remain a key ingredient at Voortman).

Robots are becoming more even sophisticated even as they become easier to “train.” And they are being released from their usually confining cages: Recent developments include adaptive robots where no programming is required—neither are any safety cages or fencing.

Now that they’re out of their cages, anything’s possible.

Packaging Digest on LinkedIn
Become one with the more than 13,000 global packaging professionals sharing news, ideas, and — yes! — solutions on social media.
Highlights 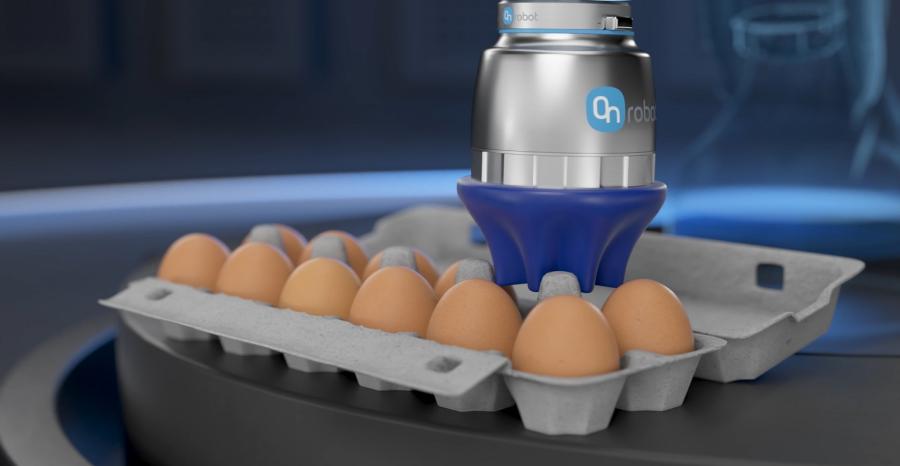 Industry Voices: Want to Get a Grip on End Effectors? Here's OnRobot
Jun 02, 2021
Advanced end effectors can make cobots more useful in solving the labor shortages faced by US manufacturers.

How to Build a Better System of Cables for Multi-Axis Robots
Jun 02, 2021
David Sandiland from igus explains how telescopic triflex TRX energy chains save space on the robot and ensure a...

Cobots, COVID-19, Contract Packagers, and Other Curiosities
May 12, 2021
The best-read articles from Packaging Digest in April 2021 span new artificial intelligence technology for assessing packaging design, a tiny yet mighty food waste reducer, and high interest in a return to in-person events — in addition to the...

How to Robotically Handle Trays for Parts Packaging
Apr 23, 2021
There’s one big pitfall in automating your work-in-process parts assembly with dunnage trays: Locating trays by the flange. Understand thermoforming basics to sidestep this common mistake and prevent costly downtime.

These Mobile Robots Are as Cool as They Are Functional
Apr 15, 2021
These mobile robots come in many shapes and sizes. Their abilities range from warehouse to agricultural work.

How Vision Systems Work in Robotics
Apr 15, 2021
Machine vision systems enable robots to identify objects, whether for lifting or inspecting.

Cobots: Are You Ready to Do It Yourself?
Apr 08, 2021
Collaborative robots are getting so easy to implement, your toughest decision may be whether to DIY it or to call for outside...